Knicks show potential and resilience with win over Cavaliers 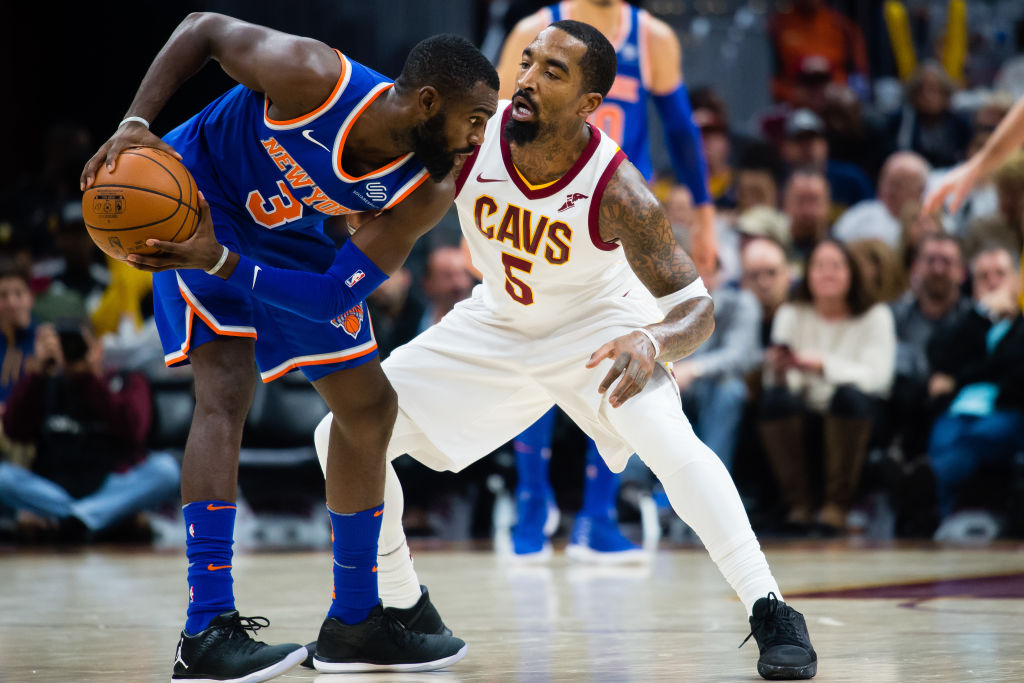 Knicks show potential and resilience with win over Cavaliers

The Knicks’ win over the Cavaliers on Sunday night proved to be an evening of many firsts. Kristaps Porzingis (32 points) made history as the first player in team history to score 30+ points in four of the first five games of a season. Currently in his tenth NBA season, Courtney Lee logged his first career double-double with 15 points and 10 rebounds. Both players were key to New York’s first win over Cleveland in ten contests. It was clear everything was in the Knicks’ favor, as Porzingis and Tim Hardaway Jr. (34 points) became the first Knickerbocker duo to score at least 30 points a piece since Carmelo Anthony and JR Smith did it back in 2014.

It took all of this and more for New York to come away with a 114-95 victory. Given how many unique occurrences there were, it’s difficult to say if the team will be able to build upon this win and take advantage of some much needed momentum. Still, the potential to do so is there and that should be an exciting prospect in of itself. There was plenty for this team to be pleased about.

Hardaway Jr. was like a man possessed as he led his team in scoring and seemingly broke out of his (less than) 30% shooting mark to start the season. It was a special night for the 25 year old, who shot 11 of 19 from the field, going to the charity stripe often and knocking down five daggers from downtown. Hardaway Jr. found his rhythm early and never looked back. Instead, his confidence grew as he converted shot after shot. From there, he was visibility excited and ensured that the Knicks got after it and pushed the pace in a way Jeff Hornacek has only dreamed of to this point.

There was terrific ball movement and the Knicks enjoyed running and gunning over a seemingly exhausted and frustrated Cavaliers team. The faster New York moved and the quicker they got to the basket with each passing possession, the more checked out LeBron James and Co. appeared to be. The NBA’s most well known superstar is highly respected for his physicality, but even he was no match for Porzingis’ 7’3″ frame down in the low post. On the flip side, both Porzingis and Lee did a good job (helped by a committee of others) containing James and his respective production. The new look Cavaliers are still figuring things out, and New York took full advantage of the window of opportunity they had to start pouring in the points. This gave way to a hole that even the defending Eastern Conference champions could not climb out of.

There are so many ways for a player of Porzingis’ abilities to score the basketball, so he can easily beat defenders and evade certain pressures. Being able to score at a high level each and every night seems to be something he’s able to do. As for Hardaway Jr., such an explosion isn’t to be expected quite as often. He still needs to develop consistency, maturity, and better decision-making in his game. Still, such a positive outing may serve as a springboard for many of those things to happen moving forward.

The Knicks needed this victory. They needed to prove that the win over the Nets was no fluke. Will this team have the potential to beat quality teams like the Cavaliers moving forward? At the very least, this group proved to be hungry. They aren’t content with losing just for the sake of development.

Jeff Hornacek continued to press the right buttons in this one. Netting yet another start, Jarrett Jack led his team with 9 assists. Enes Kanter was once again strong on the offensive glass, tallying 18 points and 12 boards total. Coach Hornacek shortened his rotation to nine players, with all five starters playing more than 30 minutes. No reserve played more than 16 minutes. New York had plenty of early firepower in Cleveland, but it’s safe to say they’ll need more of a balanced effort in the second game of their back-to-back against the Nuggets on Monday.