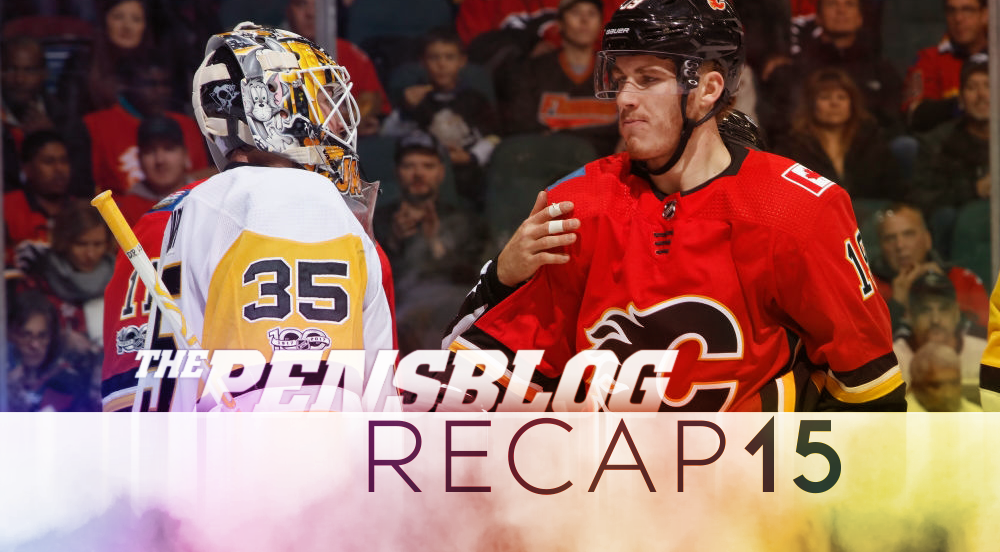 Tristan Jarry wasn’t making his NHL debut contrary to what some people seemed to think… No, that honor went to the regular season finale game last year (Remember this?). But for all intents and purposes that was a Wilkes-Barre/Scranton game so tonight was his real first game. He did it in a place he was comfortable too as the former Edmonton Oil King played annually at the Flames’ Scotiabank Saddledome in his WHL career. Archibald was out and Hagelin, who Sullivan said was “dealing with something,” was back in. Otherwise, the line-up was the same. Cue watching the opening face-off through your fingers.

First period
This was probably the best first period this team has played, maybe all season. They insulated the young goalie well by driving play away from him and he looked good when called upon. They pressured. They cycled. They moved the puck well and kept their gaps tight on the Flames. I even saw something that told me the defense was really feeling itself:

You know the Pens have come to play when they're using the Murphy Dump.

The Penguins got the game’s first power play in the first and it looked exactly how you expected. The Penguins powerplay is reaching “just put the sticks down and let them score one quick to get it over with” levels on some nights. Unfortunately, Mike Smith is 5-2-0 against the Penguins in home games and he looked it. He stopped everything. He also reminded us he’s the Western Conference version of Henrik Lundqvist (and has been for years) when he complained about Hornqvist being too close to him.

Mike Smith is on the verge of attacking someone. He's always great theater.

After one, shots were 19-8 for the Pens and score was 0-0 but it was the first time they didn’t change the goalie in the first period of the second half of a back-to-back since ‘Nam so, positive.

Second Period
The Flames came out in the second period like someone had lit their sticks on fire. Jarry had to be good. And boy was he. Just look at this:

The Flames recieved three power plays in the second, which probably is why they posted a 65% Corsi-for in the period. The first two were killed off, with some nice saves by Jarry needed when they got extended zone time, but let’s talk about the third call and the multilotto lottery results. Ryan Reaves, for better or for worse, is a Pittsburgh Penguin and with less than a minute left in the period, he threw a hit at Tkachuk that sent the Flames forward to the dressing room early for the second intermission. The call was for roughing but probably could have been two minutes for being Ryan Reaves since the hit was actually pretty clean even if as a general rule hitting someone in front of the turnbuckle is a bad plan.

reaves called for roughing on this hit pic.twitter.com/BNeDCkzj2p

The second period also ended 0-0 with the shots being 29-22 for the Pens. The Flames put 14 on Jarry in the middle frame due in large part to their two full power including six shots on the man-advantage.

Third Period
Whatever happened score-wise with this one it definitely felt good to make it late in one of these games and not feel like half the team looked horrible or the goaltender needed to be shipped out (unrelated note: Niemi played tonight in Florida). I felt pretty good, even thinking, this was a fun game to watch. Guentzel and Kessel impressed with both their backchecking and the early signs of some budding chemistry. They didn’t score but they both looked good. Sure in the later parts of the second and third it became clear the Penguins had played the night before and fatigue started to settle in but, they gave themselves a good chance in this one which is all you can ask for from a game like this.

Then Letang did something boneheaded. With less than 5 minutes in regulation, he took a high-sticking penalty. The Flames would score on the ensuing power play.
Then, because that’s just how Letang works, with 1:13 left in the game and Jarry pulled for an extra attacker he shot the puck at the net (which he really should do more as was discussed in yesterday’s recap) and it found it’s way in. Tie Game. There was a question about whether or not Malkin, during the play leading up to the goal, was off-sides but it wasn’t within the 1 minute automatic review window and if the Flames had challenged and been wrong not only would the Pens have a goal they’d have a power play for the remainder of regulation and possibly into overtime. So the goal stood and the Penguins, for the first time this season, got a point in the second half of a back-to-back.

I’m just gonna let Cass speak here. I mean seriously, 3-on-3 OT, much like game sevens is fun when it isn’t your team but when it is you feel like you’re dying a little bit inside.
The Penguins could have ended it a few times and they outshot the flames 3-1 in the OT frame. Then with three minutes to go Tkachuk (who was fine after the Reaves hit when he left the second period early) hounded Maatta into making a high-danger pass to his goalie. The pass from Jarry made it to Crosby but he couldn’t get the handle on it thanks to his coverage. Tkachuk ended up passing the puck to Giordano while the Penguins were scrambling and Giordano put it past Jarry. Flames win 2-1.

Goals:
Monahan from Gaudreau and Brodie
Hornqvist from Letang and Malkin
Giordano from Tkachuk.

The Penguins backup goaltender situation has gone from JARRING to JARRY