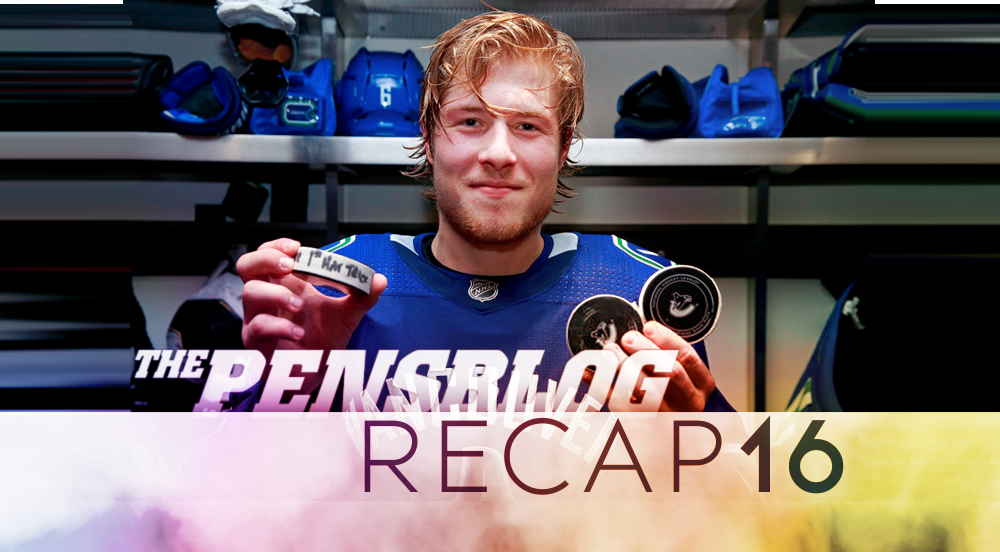 Tonight’s game was like your favorite TV series (or at least most of mine). It started off really promising then got weaker in the middle. Then they kill off a few characters for no real reason. The ending is really complex with some insane things pulled off that still leave you, somehow, completely lost and a little annoyed.

First Period
The intrigue started early in the first period of this one when Tanev laid out to save a goal. The play definitely should have been looked at by the NHL and for some reason wasn’t, even though it definitely partially crossed the line… Not to worry though. Soon the good ole PP was at it again, around two minutes into the game and boy oh boy was it what we’ve come to expect. Crosby was Crosby with a between-the-legs behind the back to pass the puck to Phil who lasered it, laying out to make the pass, to Jake at the side of the net for a redirect. It was about as pretty a goal as you’d seen. Unfortunately, it was their only PP goal on the night. The Penguins got three man-advantage opportunities in the first. But the Canucks, who are surprisingly good at the PK which I didn’t know, managed to only give up one goal.

On the other side of the ice, Brock Boeser (who I can only assume spends his weekends training his Pokemon with a name like that) tied it up at one. Maatta coughed a bouncing puck up at the blueline and Boeser corraled it, skating into Murray’s kitchen for the goal. Might want to remember that name, you’re about to read it a lot.

One final thing that became noticeable from the first shift was how rough the game was. And no I don’t mean the defensive play, yet, I mean the Canucks were throwing every Penguin against the glass they could, even going so far as to shove Maatta at the boards from a good five feet out. It wasn’t dirty play so much as reckless and it was just getting started.

Second Period
This is when things got a little weird…
Kessel was tripped or slew-footed, Corrado went face-first into the boards and basically, it was like this.

Seemingly every shift someone on the Penguins is near death. Just end this contest, please.

But there was a goal and it gets into the issue the Penguins had all night and have had a lot early this season. I present to you, Brock Boeser’s second goal (see, I told you to remember him).

There are a lot of things going wrong here including Letang passing the puck to no one before the sequence in the gif begins but…that’s all secondary to the real issue here which is. What the blazes are the forwards doing? It’s easy to track the defense’s movement. Letang marks Horvat (if a second late). Maatta has Baertschi (perhaps with a little more gap than preferred). But no one is on Boeser. He is literally behind the next by himself. And furthermore, the forwards are all way too high in the zone to effectively help out their defense. Not a single one is below the dots. Just look:

First of all, Crosby should be away closer to this play period. Sure the play is broken but he needs to get back into it quicker. None of the forwards are close to anyone except maybe Crosby on the near-side defender. No one makes it back into the play until Boeser’s already scored. That’s too late.
That, my friends, is the crux of the issue with the team’s defensive woes right now. Sure, the defense is making mistakes but a lot of them are because they’re being left hung out to dry by the forwards (look at Maatta there on an island, how many times have one of the defenders this year been on that same island?) or because they’re trying to overcompensate for the mistakes of the forwards.

Third Period
In the third, the Penguins came out strong. Honestly, I wish I could end this hear because this is 100% true. They outshot the Canucks by a huge margin and put the first seven shots on Markstrom. They even scored to tie it up after some great work by Frank Corrado and the third line. Then, Hornqvist hits a post and it seems like everything is going to go the Penguins way. They might come back and win this thing. And then.

No one picks up the late man. Stop me if you've heard that one.

On their first shot of the period, the Canucks scored. Oh and Boeser completed the hat trick because no one marked the late man. The Canucks would add an insurance marker after Boeser slew-footed Dumoulin behind the net leaving Letang on an island. The worst part was the Penguins looked dominant when they had the puck in the third. They were cycling and shooting everything at Markstrom. And every mistake made it into the back of their net. They were so close to scoring but couldn’t get anything past Markstrom. They managed to double the Canucks in high danger shots for and just… couldn’t make it work. This is a lesson they need to learn now though, as painful as it is. To play smarter on the defensive side of the puck because sometimes they won’t go in. Yes, they can score the lights out…but sometimes you put up 155 shots on a road-trip and only 8 go in so you better find ways to win the low scoring ones.

It wouldn’t be a Canucks game recap without this: