Is It Too Soon To Say Knicks Made Right Choice In Frank Ntilikina? 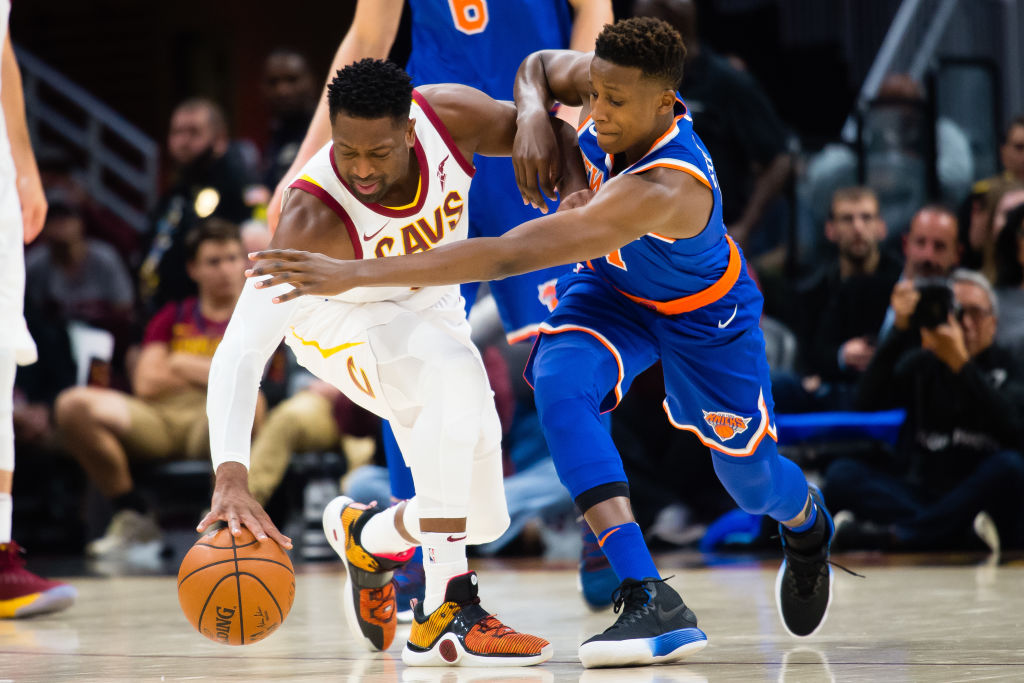 Is It Too Soon To Say Knicks Made Right Choice In Frank Ntilikina?

LeBron James got his first look at Dennis Smith Jr on Saturday night, with the rookie scoring 21 points and dishing out 7 assists in his team’s loss to the Cavaliers. The superstar was impressed and didn’t stop short of speaking his mind.

“The Knicks passed on a really good one, and Dallas got the diamond in the rough,” James said. “He should be a Knick. That’s going to make some headlines, but he should be a Knick. Dallas is definitely, I know they’re excited that he didn’t go there.”

Smith Jr. was under consideration by New York before the team selected Frank Ntilikina with the eighth overall pick this past summer, allowing the former to slip to the Mavericks at tenth overall.

If it comes as a surprise that James is caught up in matters relating to two teams other than his own, all signs should point to his relationship (or lack there of) with Phil Jackson. The former Knicks President disrespected James by regarding his business associates as a “posse.” Knocking one of his final moves as a Knickerbocker executive provided James with a chance to take a dig at Jackson.

But is such a criticism justified? One could make the argument, even at this early juncture in the season, that the Knicks made the right choice with Ntilikina.

Smith Jr. is averaging 14.8 points, but is shooting poorly across the board.While he dropped 21 in his 2-11 team’s latest defeat, Ntilikina dished out 5 assists (and boasted a plus/minus of +10) in the Knicks’ 27 point victory over Sacramento. New York has shocked the basketball world with a 7-5 record, and their rookie point guard’s early chemistry with the rest of the team’s young core is a big reason for the success.

Much like Smith Jr. Ntilikina has struggled to find his groove from the field. Still, his scoring prowess certainly isn’t as vital to New York’s winning ways. He’s otherwise been just as good as advertised, which has been incredibly refreshing. Only 19 years old, the guard currently leads the NBA in steals per 48 minutes with 3.8. He also ranks sixth in assists per 48 minutes with 11.9, Such a mark is much higher than Smith Jr., who sits 28th on the list. It should be noted that Knicks’ starting floor general Jarrett Jack (17th place with 10.3 assists) is also ahead of the Mavericks’ rookie.

Ntilikina has a long way to go with much to learn. He has to improve his instincts when taking advantage of his own offense: there needs to more penetration. Being able to aggressively drive to the basket and cut through the lane will keep the defense on its toes while opening up the offense for others. At times, his jumper has proven to be rather flat as well. These are his areas of opportunity: at the same token, the young stud’s talent is undeniable.

Ntilikina’s positive play is often infectious. He’s an absolute pest on defense and is already developing a rhythm with Porzingis and Co. With the 22 year old as the team’s budding star and respective centerpiece, Ntilikina will play a crucial role in making him look good and finding him in the right places, moving forward. He’s a very strong orchestrator for this offense, something that New York has craved for years. It’s just what Porzingis needs as he continues to rise. It’s difficult to say if Smith Jr. could serve the same purpose, given the nature of his talents and style of play.

Both players are likely to flourish into very talented players in the NBA for a very long time. Any debate shouldn’t be so much about talent, as it should be about finding the right fit. Even early on, there is plenty of evidence that the Knicks in fact made the right choice. When James comes to visit The World’s Most Famous Arena on Monday and has his first look at Ntilikina, perhaps he’ll see that for himself as well.