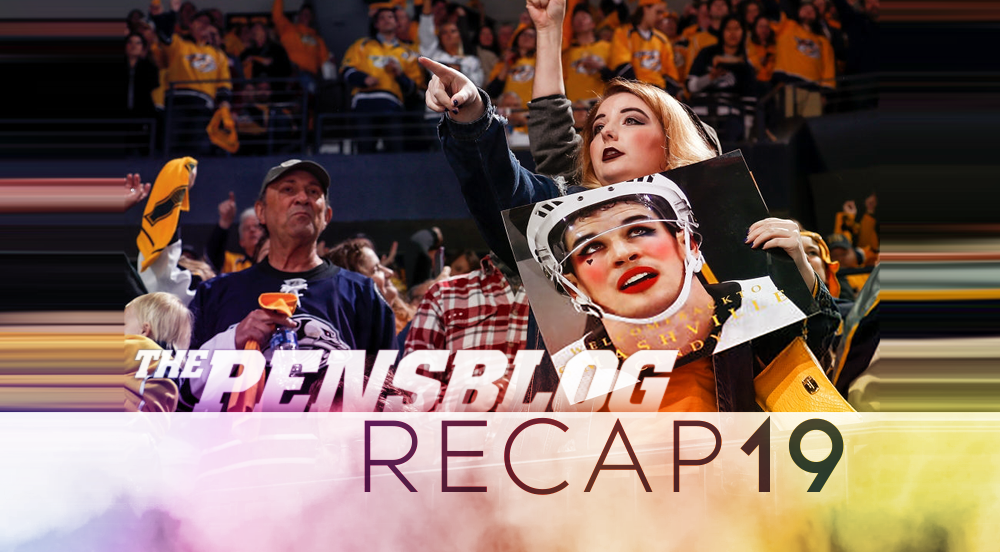 Maybe it’s all of that stuff but it can’t be stated enough: Anyone overreacting to this team at this point in the season, in any way, for any amount of time, should not be trusted to drive a car, be around sharp objects or lift anything over five pounds. Maybe take a step back, you know? Try some therapy: Break the routine of watching this season’s games and complaining all night Twitter and fire up one of the Penguins’ five Stanley Cup Final clinching games instead. They’re all on YouTube. Play them on rotation for a few months and then come back to us when you’re ready.

It’s easy to forget how good this team is when pretty much every statistical chart and graph you see depicts how badly the Pens have been underperforming. The thing about data is what goes up must come down, and for the Pens, what goes down will eventually come up. There’s a dick joke in there somewhere but today is the Lord’s Day.

Anywho, the proof that this team is more than fine is in the pudding when you see a game like this one Saturday night against the Preds. The Pens are on a back-to-back (a situation that is all but an assured eating of the L), on the road, against a good team that wants their fucking blood. They get down 3-1, look dead in the water, then storm all the way back to tie the game and eventually force an overtime.

When the day comes that this team’s back is completely against the wall, when they have everything to prove, and they go out and fail, that’s when it is time to panic. When they can still go out on a random night in November, against significant odds, and get a point against one of the best teams in the West…

A little over halfway through the period, Bryan Rust got the Pens on the board first with a shorthanded goal.

SHORTY! Now that's a great way to kick off the scoring!

Rust lowkey has a filthy wrister.

The Pens are going to have a lot of opportunities for shorthanded goals if they keep taking penalties at their current rate. They’ve been shorthanded 77 times this season, which leads the East and the next closest (Washington) isn’t particularly close (70). That’s a problem now, but probably won’t be in April and May when things tighten up and referees put their whistles away. If I’m Mike Sullivan, I’m not forcing the issue when it comes to penalties — not yet, anyway.

The Preds scored three unanswered goals and it was starting to look like this might be one of those games. But just when the Pens needed a jolt the most, an American Hero who never forgets to support the troops and goes by the name of Phil the Thrill brought them within one:

Lovely work down low by Malkin to stick with the puck and find the open hero.

The Pens kept the momentum going and it was Jake Guentzel, who has killed more Predators than Danny Glover and Arnold Schwarzenegger combined, tieing things up at three.

So silky. So smooth.

The Preds came right back a minute later when Calle Jankrok left his job at Jo-Ann Fabrics and put the Preds back in front, 4-3.

Stone Cold Brian Dumoulin hasn’t scored a goal all season but that didn’t stop him from pinching the slot like Paul Coffey in his prime to bury a nice feed from Sherrrrrrry to tie the game back at four.

The game went to OT and although the Pens had the better of the chances, they couldn’t finish the deal. The shootout was all Preds and Music City can finally dance again — 5-4 Preds.

To summarize the game, and the state of the team right now:

Coach Sullivan: "I liked our team tonight. It was a hard-fought game out there. I really liked our response. I liked our resilience. I think if we play hard like that and execute the way we did tonight, we're going to win more games."