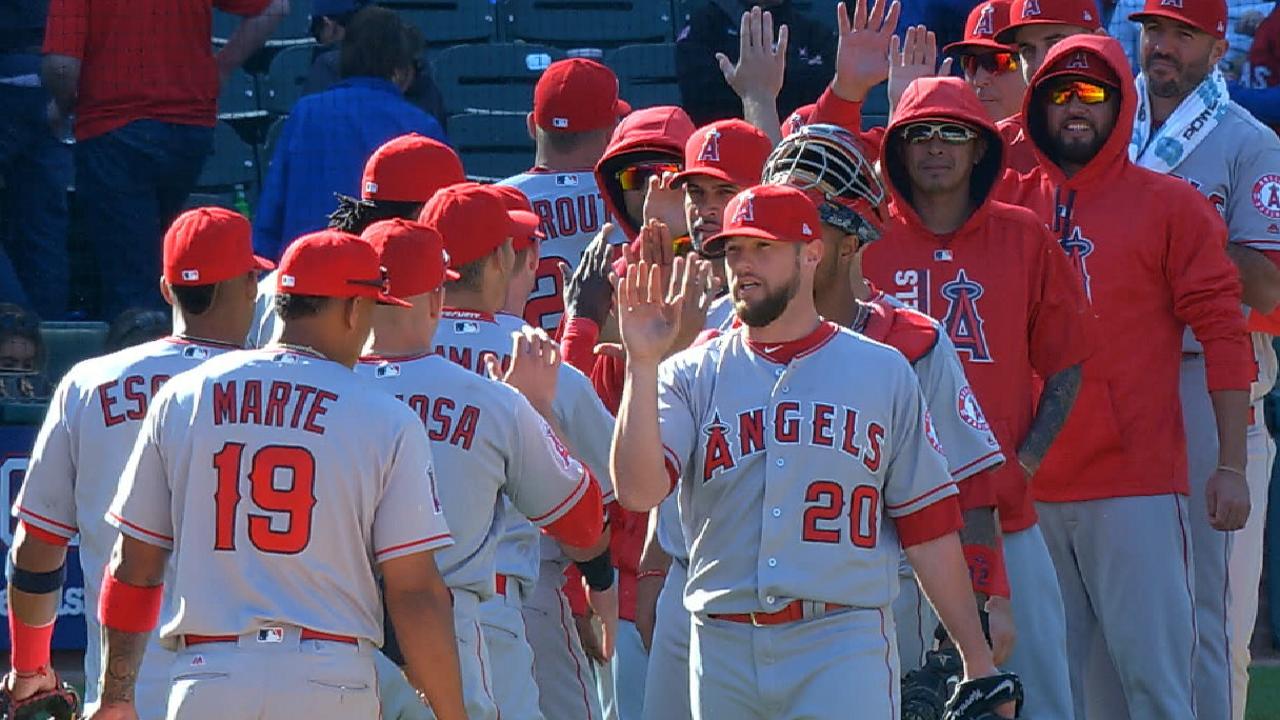 Leading that charge was Yusmeiro Petit, whom Eppler signed out of free agency, followed closely by waiver-wire claim, Blake Parker. Behind them was trade pick-up David Hernandez (later sent to the Diamondbacks) followed by homegrown Cam Bedrosian.

All acquired through different methods and all achieving strong results!

Even behind those critical four pitchers, the Angels got positive results out of role players like Jesse Chavez, Bud Norris, Jose Alvarez, Keynan Middleton, and late in the season, our old friend Fernando Salas and waiver-wire pick-up Blake Wood.

So what does 2018 have in store for the bullpen?

The Angels declined Huston Street’s option, paying his a $1M buy-out, sending him into free agency, along with the other relievers we are losing, so that Eppler can acquire other, higher impact candidates.

Unless Billy replenishes the loss of Petit, Norris, Hernandez, Street, Chavez, and Salas (and possibly Wood if they non-tender him) the Angels will likely take a step backward in production, to some degree, next year.

Billy has proven very good so far at evaluating talent and combing the free agent and trade markets, as well as the waiver-wire, so Angels fans should have a measure of confidence that our 2018 relief corps will be reasonably good, it is just unknown how good or bad it will be compared to 2017.

The table below shows most of the available internal relievers, at the AA, AAA, and MLB levels, that the Angels could potentially call upon to support the 2018 campaign (Options, listed, were pulled from RosterResource.com, as of 11/08/2017):

The 2018 season should see the return of Blake Parker, Cam Bedrosian, Jose Alvarez, and Keynan Middleton into the fold. Additionally Eduardo Paredes should have a shot to make the team again out of Spring Training (but he has options so they may start him in the Minors). Blake Wood might return too but he will come with a likely, hefty, arbitration salary at about $2.2M so the Angels might non-tender him instead (more likely than not he stays).

In addition to those guys, the Angels picked up some additional players throughout the season including Noe Ramirez, Felix Pena, and Dayan Diaz all of which have pretty live arms and could be contributors to the bullpen next year.

When you analyze the back-end of the Angels ‘pen it is still relatively intact. Parker was absolutely tremendous in high-leverage situations (28.6% K%-BB%) as was Cam Bedrosian (20.5% K%-BB%) and Keynan Middleton (27.3% K%-BB%).

What this really means for 2018 is that the Angels do not have to go out and sign a high-end reliever in free agency or acquire one in trade. Certainly adding another quality arm would be very useful but it is not an area of strong need.

Eppler will probably be better off combing the waiver wire and trade markets again or simply waiting out the free agent market, until January, to pick-up a marked-down asset that can contribute quality innings.

An experienced veteran would probably be value-added to the youngsters in our bullpen and would only tie up a relief spot and payroll for 1-2 seasons. Alternatively the Angels could probably reunite with Yusmeiro Petit or even Bud Norris on another one year deal.

Instead of acquiring a reliever the Angels actually have in-house options available as well. Players like Adam Hofacket, Conor Lillis-White, Greg Mahle, Jeremy Rhoades, and Michael Dimok could be potential contributors at some point in the 2018 season if there is a need.

In fact having this many relievers down in AA and AAA could be part of the plan if the Angels run out more “bullpen” starts in 2018. The Halos could potentially fill the remainder of their 40-man  roster with relievers and rotate them in and out of the Major League team, riding the shuttle up and down to Salt Lake City or Mobile each week if the reliever(s) in question have at least one option available (which most of them should).

Of course the team could simply take one of our recovering starters, for instance Nick Tropeano, and have them pitch out of the bullpen for some or all of 2018. Tropeano and Ramirez (if he does not require TJS) would be ideal candidates actually if that is the route Eppler decides to go because they will both likely be on a strict innings pitched limit next season, particularly Nick.

Another route that Eppler could take is to trade one of Parker, Bedrosian, and Middleton as part of a package for another area of need and sign one of the many relievers available in free agency.

As an example the Angels could package up Bedrosian and perhaps a reliever like Michael Dimok and ship them off to the Indians in exchange for 2B Jason Kipnis. Then Eppler could go out and sign someone like Addison Reed on a 4-year, $48M deal. This would raise total payroll by about $20M in AAV but would solve our 2B issue for the next three seasons and replace what we lose in Cam’s absence.

It is my suspicion that Eppler will generally try to take the route of least resistance when it comes to building and spending money on the bullpen. This is one trait that Billy and former Angels GM, Jerry Dipoto, have in common but it is the former that has done a far, far superior job of finding the right talent in his short time with the Angels whether it is through trade, free agency, or even picking a gem out of the Minor Leagues.

In fact, as Jason Sinner pointed out, there are a slew of Minor League free agents hitting the airwaves this off-season per BaseballAmerica.com, that Eppler may want to sign to a Minor League deal to act as team depth.

However, with all of the resources now available this off-season, Billy does have room to make an addition or re-shuffle the deck a little to bring in at least one of his preferred choices in free agency or trade and could very well do so.

Based on the current roster here is the projected Opening Day bullpen for 2018:

This of course assumes that both Nick and J.C. are healthy and fully recovered. Both Ramirez and Wood are out of options so they have to be on the roster in some capacity if the Angels retain them both (and they probably will). If Tropeano and/or Ramirez (J.C.) are not available on Opening Day, Eduardo Paredes and Noe Ramirez are probably the next most likely candidates to bring up.

So the point of this discussion rests on the premise that the Angels could simply enter 2018 with the assembled group of relievers currently in place and probably have an above average bullpen group. It is certainly a nice group of hard-throwers, mixed with some lower velocity types that can give hitters a different look in the batter’s box.

However it really feels like Eppler could do a little bit more to improve this squad heading into next season, particularly if he can acquire one more high quality reliever that can get batters out on both sides of the plate. This would allow Billy to afford to either a ) displace someone like Scribner, who has options, down to the Minors or b ) run an 8-man bullpen for most, if not all, of the 2018 season.

The Angels, not unlike what the New York Mets are planning to do in 2018, are well positioned to run out more bullpen “rotations” where most Angels starters would not exceed more than two times through the batting order of an opposing team. This is a bit more likely, in part, due to the possible innings pitched limits we discussed for the starting staff in the Rotation section of the Primer Series.

It will be very interesting to see what the Angels do with their entire pitching staff this off-season. If Eppler goes out and acquires more than one quality reliever it heightens the odds that the team will move toward this new vector and philosophy on how to statistically utilize your starters and relievers in the most effective manner.

No matter what the bullpen winds up looking like, it should be a potent group capable of holding up any lead in the mid and late innings of games. Eppler, in a short sample size, appears to have an excellent group of scouts and analysts with the ability to spot talent so the bullpen is unlikely to be a source of trouble in 2018.

Here are the resource tiers with a sampling of players Billy might be eyeing in free agency or trade:

For the most part I believe the Angels will stand pat in the bullpen when you consider that Nick Tropeano and J.C. Ramirez are unlikely to break the Opening Day rotation.

All that being said Eppler has resources to apply this off-season and there will almost certainly be a high degree of interest in one or more of Parker, Bedrosian, and Middleton in the multitude of trade discussions Billy has or is currently having with the other 29 teams.

There are a fair number of quality relievers in the free agent and trade markets so it would not be a total surprise to see a guy like Parker or Bedrosian moved for another area of need and then Eppler uses either cash or trade chips to acquire another two-way reliever to replace him.

If Billy does go after an additional bullpen piece in trade, I am putting my money on Brad Hand of the Padres. If he prefers free agency I am going with Addison Reed, Jake McGee, Mike Minor, or Yusmeiro Petit, but this search is so wide and broad it is simply anyone’s guess so feel free to insert your own favorite reliever into this discussion.

In the next section we will cover the Middle Infield.