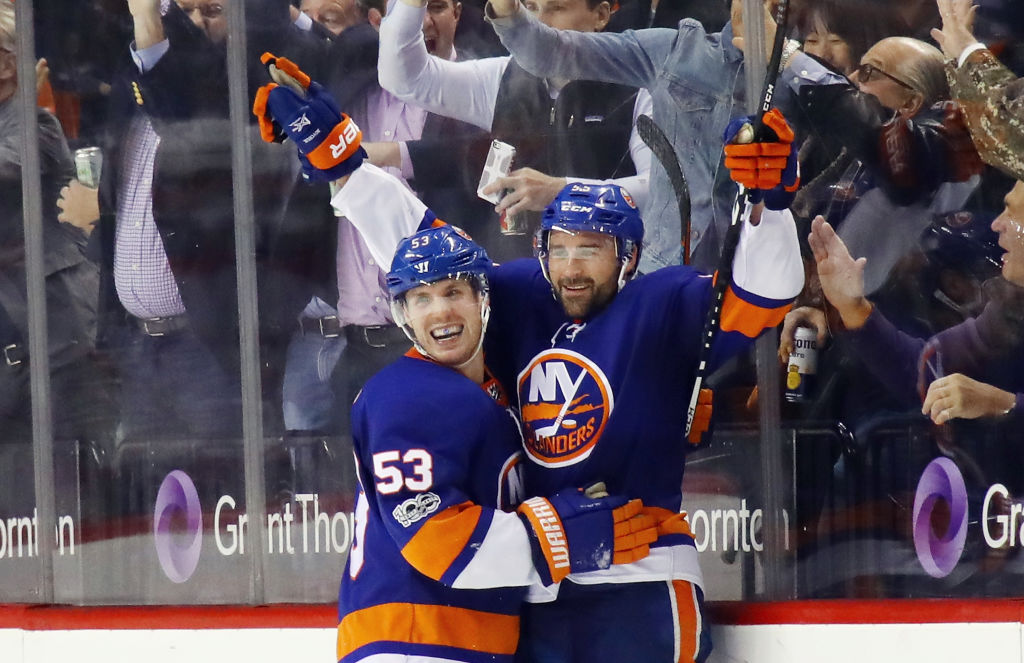 NEW YORK — The Islanders rallied in the third period on Thursday night to come away with a 6-4 win over the Carolina Hurricanes.

Johnny Boychuk scored the game-winning goal at 15:35 of the third on a shot from the top of the faceoff circle. Casey Cizikas was able to slide the puck towards Boychuk to set up the shot and the Islanders’ defenseman’s shot made it by Scott Darling.

Jordan Eberle scored an empty netter at 18:42 to seal the win.

The Islanders had jumped to a lead late in the first period, scoring twice in a 36 span. Mathew Barzal scored his fourth of the season at 16:21 and then seconds into a Carolina power play Cal Clutterbuck broke loose for a shorthanded breakaway goal at 16:57.

Carolina answered back with a goal from Elias Lindholm at 17:30 on the power play, but Nick Leddy gave the Islanders back the two goal lead with his fourth of the season with 28.6 seconds left in the first.

It was the second period where Carolina scored three times to put them in front. Noah Hanifin kicked things off 2:54 into the second to pull the Hurricanes within one. Derek Ryan tied the game at three with his goal at 11:19 and a goal from Sebastian Aho with less than a minute left in the second gave Carolina the 4-3 lead.

Josh Bailey scored the tying goal for the Islanders at 7:22.

1. Give the Islanders credit where credit is due… After a bad 20 minutes in the second period. the Islanders managed to rally in the third to pick up two points against an Eastern Conference opponent. The Hurricanes have given the Islanders fits in recent memory, especially at home. Coming into Thursday’s game the Islanders were 5-12-3 in their last 20 home games against Hurricanes and it looked as though they were going to add another notch in the loss column coming off that second period performance.

“The second period was really sloppy,” Johnny Boychuk said. “We have to clean that up, because when we did, we just got it in deep and went to work and we got our chances that way. Second period, we weren’t careful with the puck, had some bad decisions and we let them back in the game. But overall, we’re happy with the win.”

2. The win may have been good, but it’s hard to overlook that second period. As Boychuk noted, the Islanders were very sloppy with the puck and made some bad decisions. The Islanders inconsistencies in their play from period to period is something that has been an issue at times during the course of this season and needs to be corrected, especially as they face tougher opponents.

Carolina is a good hockey team, but could the Islanders weather a period like they had on Thursday against a team like Tampa Bay, Pittsburgh or Washington. It’s not something Doug Weight and his coaching staff want to have to find out. Islanders head coach Doug Weight sounded frustrated after the win with how the team got away from what it was doing right in the first period and you can expect him to stay on top of the players about finding that consistency period to period and game to game.

3. “The second period you know we get away from everything we did well. A little predictable spots on the ice, getting pucks in and just relentless forechecking. Just getting it to the D and simplicity. Then you’re going to be able to wear teams down, stretch their zone out and be able to make some really nice plays. Cut back some plays around the net and we just go into one-on-one mode around the net and hold the puck. Decisions at the blue line start going south and then we start getting back to it in the third, and we play a better game. They think that sooner or later I’m going to get tired of telling them or showing them, I’m not. I’m not going away, because they could be so much better. They as in we and we’re getting there. It’s not a hopeless case and we got 6-4 win over a good hockey club.” — Doug Weight

Hear from Doug Weight after tonight's 6-4 win over the Hurricanes. #Isles pic.twitter.com/URQ9PHHVRF

4. While the three Islanders’ youngsters (Barzal, Josh Ho-Sang and Anthony Beauvillier) all played well, there were still a few gaffes on the ice. Ho-Sang had the puck poked away from him near the blue line and had to have Thomas Greiss bail him out on the other end. Beauvillier was muscled away the puck once or twice in his own end and both Ho-Sang and Beauvillier were on the ice for a goal against.

5. Barzal had another impressive play on Thursday with his first period goal that gave the Islanders a 1-0 lead. The rookie has shown off his speed and skill with the puck, as well as his ability to make a play, but he has still been hesitant to shoot at times. That wasn’t the case when he came flying down the win and then wristed a quick shot past the glove of Darling. The shooters mentality is something the Islanders want to see more out of Barzal and his goal on Thursday is the exact reason why.

6. Thomas was good, not great in the Islanders’ win over Carolina. The New York starter made 28 saves on 32 shots in the win, but finished with an .875 save percentage. He made the stops when he needed to, but it wasn’t an effort that knocked anyone’s socks off.

7. “I think we want to play better defensively. Obviously the goals are fun, but playing good defense will lead to good offense for our team. We’re a very skilled team, a fast team and, like I said, the better D we play the more offense will come.” — Nick Leddy on the Islanders performance

The Islanders remain undefeated in regulation with Thursday’s win. New York is 6-0-2 this season at Barclays Center and is the only team besides Pittsburgh without a regulation loss at home this season.