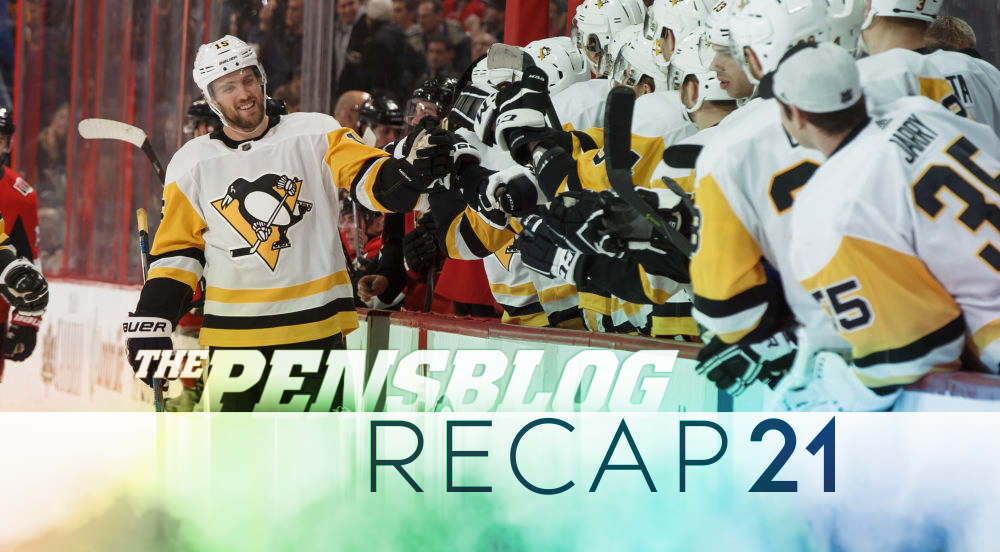 The Pens are officially back. The two-and-a-half-month hangover is over. The worst part of their dreadful schedule that saw them play 14 of their first 21 games on the road, including six back-to-backs, is finally behind them. The team defense that looked about as organized as the kids games during intermission has found its groove. Matt Murray is still solid as Iraq. The offense is starting to get it going. As if there was ever a doubt, the best team in the NHL is the best team in the NHL once again.

For all the panic and fuss some fans and B-level media members (looking at you, Mud Boonshine) like to create, this team just keeps showing you all how stupid you really are. They just went through their worst stretch any of us have seen since the Winter of 2015 and, as of this morning, are sitting in a tie for first in the Metropolitan. If you can bring yourself to complain about a back-to-back championship team one month into the season, I feel for you. I’d say it was embarrassing to watch but the problem with that statement is I’m actually surprised when people aren’t complaining. Normal fans are just a spoke on the wheel of insanity that keeps turning until the team strings some wins together and shuts all the idiots up. Then a loss or two happens and the process repeats itself. Fans are supposed to overreact, so part of that is understood. But the Pittsburgh media is the absolute worst, especially some of those who “cover” hockey. Their biggest problem?

The Sens had some steam coming out of the gate but Matt Murray was everywhere. Their best chance subsequently resulted in the best save of the my life:

matt murray is wanted by ottawa police for larceny pic.twitter.com/5OMRBGXQHq

Your Save of the Year ballot needs updating…

The Sens kept coming but the period ended scoreless thanks to Murray and it was all Pens from there.

With less than a minute left, Jake Guentzel put the Pens up 2-0:

Winning back-to-back championships…
Playing tons of back-to-backs games…
And now Guentzel is scoring with his back.

The Sens got a rogue breakaway goal to make it 2-1, but it was still all Pens. Ottawa managed just 12 shots the final two periods and none were what you would consider good, besides the breakaway. Riley Sheahan put the icing on the cake when he scored his first goal of the season, and first as a Penguin, with an empty-netter with 30 seconds left in regulation. Empty-net or not, it’s something from Sheahan. Something. Anything.

More games like this, please. Not all of them will be pretty, but they don’t have to be. Just keep digging.