RECAP: Celtics Avoid the Blues in Memphis and Split Their Back-to-Back 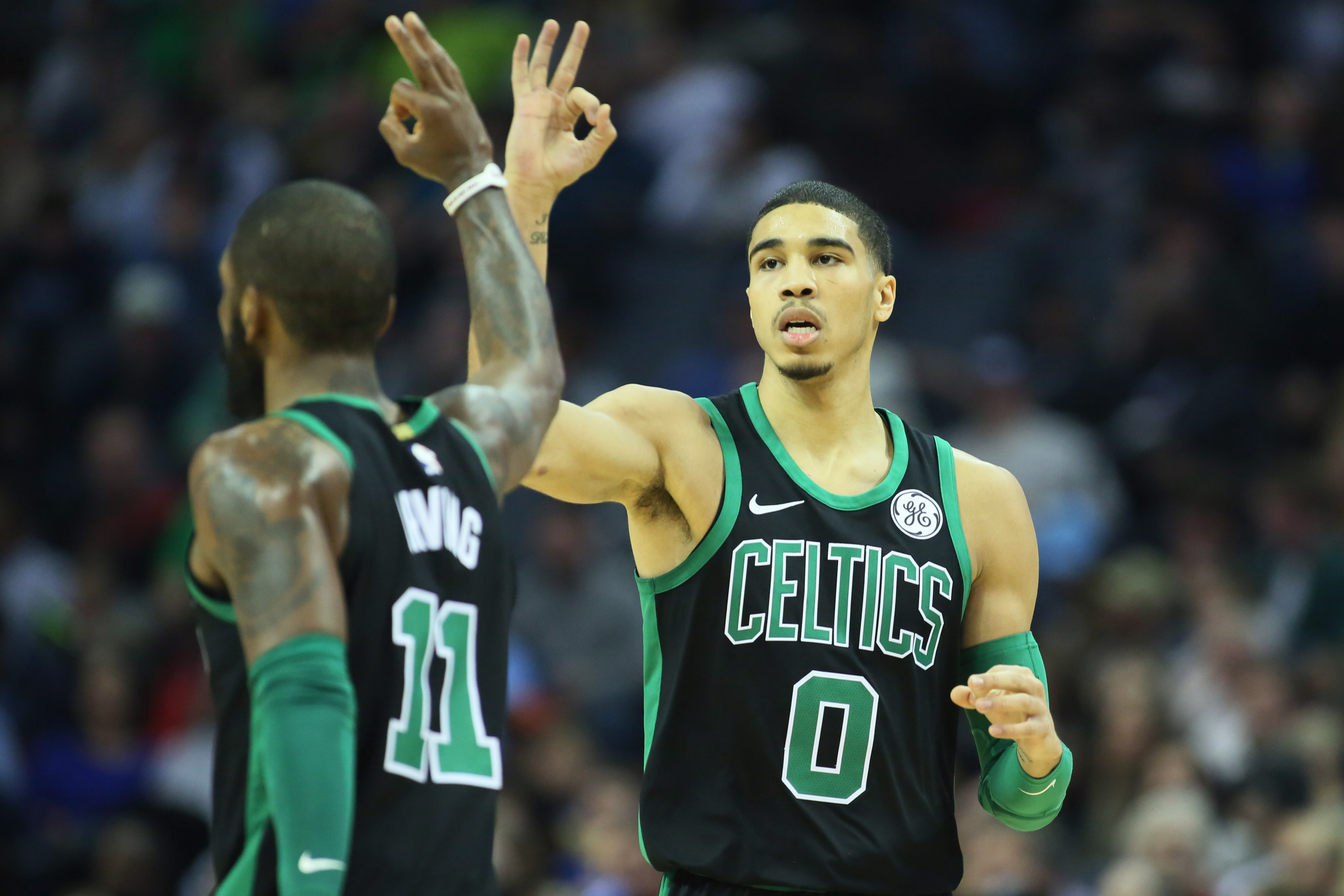 RECAP: Celtics Avoid the Blues in Memphis and Split Their Back-to-Back

Although they let a 21 point lead slip away, this was a true team win for Boston tonight. Their defense held Memphis under 100 points, they tallied more than 20 assists as a team, and six players scored in double figures.

Ultimately, the Celtics avoided back-to-back losses and got back on track in Memphis with a final score of 102-93 despite playing their 5th game in 7 nights. Memphis is now 2-16 without their star, Mike Conley, whom they expect back within the next two weeks. Boston is now 10-2 against the vaunted Western Conference.

Excuse the cliche, but the Celtics first half really was a tale of two quarters and there’s no better way of saying that. The first quarter they were facilitating the ball beautifully. To that end – they finished with 10 assists in the first half alone. Kyrie Irving seemed particularly interested in passing, as he drove and kicked the ball out to Baynes for two baseline jumpers to begin the game. The best revelation of the first quarter, aside from the passing game, was Tatum’s aggressive and efficient play off of the pick and rolls. One great play came after Jaylen Brown’s stellar defense as the Grizz ran in transition led to the Celtics forcing a miss of their own. Jayson Tatum then received the ball, dribbled around the pick set for him, then pulled up and drilled the 3. Later, Tatum would come off of the screen, draw 2 defenders, and was aware enough to dish to the rolling Baynes for the easy dunk. As substitute color-commentator Scalabrine said during the game, it’d be a fantastic development for the 2nd unit if Tatum were to consistently run successful plays out of the pick and roll.

The Celtics shooting was the real highlight of quarter one, though, as Boston finished 4 of 6 from deep and shot 58% from the field overall. Boston already had six players score for them and were only twelve minutes into the game. The Grizzlies, meanwhile, were abysmal. No joke, they shot 22% from the field over the quarter. It was ugly, the score was 31-12 after Q1, but the NBA is a game of runs.

Great find by the rook 👀 pic.twitter.com/AewBU4fFeq

Memphis made their comeback during Q2 mainly off the backs of Tyreke Evans and Marc Gasol. One of the many runs tonight included a stretch in which the Grizz outscored the Celtics 18-5 over a 5 minute span during Q2- this allowed the Grizz to claw (get it?) their way back within shouting distance. It seemed that every time the Celtics attempted to pull away, the Grizz were ready with an answer in the 3 ball. When Marcus Smart and Kyrie Irving went back and forth up the court only to score a layup, it was all for nothing, in essence, since Evans followed their 2 with a 3 in Irving’s eye on the other end. The two plays ended in a net loss for Boston, and much of the 2nd and 3rd quarter proceeded as such.

While the Celtics once held a 21 point lead, the margin between the two teams had dwindled down to just 8 as Boston clung to a 48-40 halftime lead. The Celtics were trailing the rebound category 19-23, but managed to force more turnovers (7) then they had coughed up (5) by the end of two.

Jayson Tatum continued to show flashes of brilliance through the second half and finished with one of his better games as a pro: 19 points on 7 of 13 shots, along with an impressive 9 rebounds, an assist, 2 rebounds. and 2 blocks. This kid scored from all areas of the court, effectively ran plays off of screens all night long, and overall has us drooling thinking of his potential.

Boston would have walked away with this one early in the second half if it weren’t for two major problems that had arisen during the third quarter. #1) The Celtics could not stop the high pick and roll with Tyreke Evans, and #2) Marc Gasol started to shoot the lights out. Gasol already leads his team in points, rebounds, assists, and blocks averaged per game this year; and tonight, particularly during the third quarter, he cushioned those stats. Gasol scored 21 of his game-high 30 points during Q3, as he made 8 of his 10 shots from all over the court during the short twelve minute span. The Celtics were somehow still leading after the third quarter, 73-71, but now it appeared the game would come down to the wire.

Terry Rozier had been ice cold lately but came in clutch during the final frame, beginning with a 3 to stretch the Celtics lead to 5 with 10 minutes left. Rozier finished with 10 points off of the bench and provided the spark needed late in this game to energize his team to a win, so hopefully this shakes off his shooting funk. Later, when Mario Chalmers lost his handle, Tatum scooped the ball and brought it home for the slam finish to extend a run and open up a 9 point lead for Boston. That run eventually reached 16-0 and became the game changer necessary for Boston’s W in the end. The Celtics won the game by a score of 102-93 without an ounce of drama in the final quarter.

Final Notes: Marcus Smart made a few big shots in the 4th quarter and finished with 11 points on 3 of 6 shooting to go along with 5 assists and 2 rebounds. Aron Baynes had a solid showing tonight sinking 6 of his 8 shots for 13 points in addition to his 6 rebounds. Jaylen Brown had 9 points and did not score in the 2nd half, but he added 7 rebounds. The bench outscored Memphis’, 26-16.

As mentioned above, Marc Gasol had an absolute field day running the pick and roll with Memphis guards in the 3rd quarter. If it seemed he hit nearly every shot he took it’s because he almost did. This man went 8 of 10 from the field during Q3 and made shots 2 feet from the rim to behind the arc and everywhere in between.

Celtics in the third quarter: 23 points on 9-for-18 shooting.

He ultimately finished having scored 21 of his 30 points during the quarter, leaving the Celtics wondering what the hell just happened?

Hot: Marc Gasol’s 3rd quarter, but I’ve covered him enough. Let’s talk about OUR big man, MR. Al Horford. All he did was shoot an efficient 7 of 12 from the field tonight, enough for 15 points while contributing 7 rebounds, 6 assists, and a block. Al Horford is your prototypical underappreciated big man. Red’s Army loves you, Al.

Not: Mario Chalmers. You went 1 for 8 from the field, and while that 1 was a big shot that brought your team within 6 points with just over 2 minutes left in the game, the remainder of your shots were of horrendous selection and form. You were a -16. You’re the opposite hot, bruh.

Awesome defense and an equally impressive finish. The Celtics looked great in the first quarter.

Jaylen protects the paint, then Kyrie with a pretty assist on the other end 👌 pic.twitter.com/YQWNwRifHx

Honestly, we don’t highlight the D often enough. If you’re a true Celtics fan you know the incredible importance the defense is in Boston’s system, and Daniel Theis (former German Defensive Player of the Year) has the perfect skills necessary as a reserve big.

Masked Theis with the rejection! 🚫🚫🚫 pic.twitter.com/Wkr6VkbTUt

Al Horford was busy putting in the dirty work.