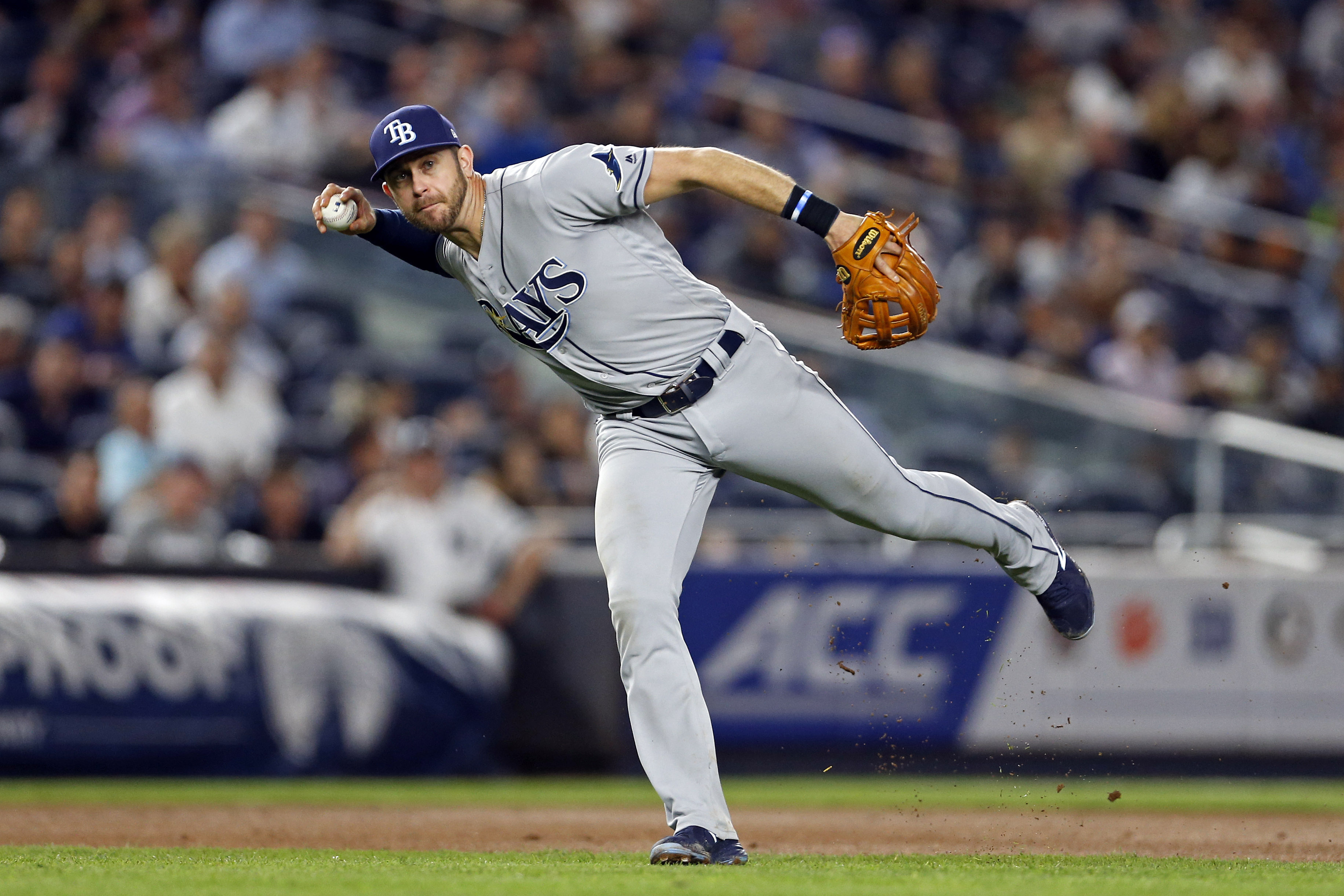 Well, it looks like the Tampa Bay Rays are in need of a new face for their franchise.

Earlier today, news broke that they’ve traded third baseman Evan Longoria (and some cash) to the San Francisco Giants for a handful of players.

The Rays are almost always considering sell mode each winter based on their situation, but it looks like they’re actually going through with it now that they’ve sent Longoria and the long-term financial commitment attached to him ($86 million through 2022) packing.

It’s no secret that the Giants have been searching high and low for offensive upgrades this winter. While most of their efforts were initially focused on Giancarlo Stanton, they’ve officially moved on by striking a deal with Tampa Bay. At first glance, this transaction immediately solves two specific problems for San Francisco.

Issue No. 1: Filling the Huge Void at Third Base

The Giants had baseball’s worst offense by a number of metrics in 2017, but their situation at third base was a microcosm of what ended up being a 98-loss campaign. The group of players that manned the hot corner last year (mostly including Eduardo Nunez, Christian Arroyo, Kelby Tomlinson, and Pablo Sandoval) combined to post -1.8 fWAR and a 64 wRC+, both of which were easily the league’s worst marks.

An upgrade was necessary, but it’s not as if Longoria is as much of a slam dunk as he used to be.

The veteran did win a Gold Glove in his age-31 campaign, but the offense took a dip. He enjoyed his ninth season of 20-plus homers in 2017, but the 20 bombs and 86 RBI he accumulated were a steep dive from the 36 taters and 98 RBI he posted the year before.

His .737 OPS was the second-lowest number of his big league career, while his 96 wRC+ and .312 wOBA were both career worsts. The 2.5 fWAR he produced was just the second time he’s been worth fewer than three wins in a season. The only other time this happened was in 2012, when he produced 2.2 fWAR in just 74 games played.

It’s a risky investment for the Giants since they’re acquiring Longoria for what will likely be the least productive years of his career. Did you see who played third base for them last year, though? Outside of Nunez (who was traded prior to the non-waiver trade deadline), literally anybody would be an improvement.

Grabbing Longoria from Tampa gives San Francisco a proven big leaguer that’s had consistent success at the plate and is coming off a stellar defensive campaign.

Issue No. 2: Clearing a Bad Contract

Based off their efforts so far this winter, the Giants have made it known they’re reloading for 2018 and not embarking on any kind of lengthy rebuild. However, they’re still interested in ridding themselves of certain contracts in the right situation.

That was evident last week when they dealt starting pitcher Matt Moore and his $9 million salary to the Texas Rangers, and it was evident again here. Denard Span is due to earn $9 million in the final guaranteed season of his three-year deal, but he was likely headed for a role change if he stuck around in San Francisco.

His offense in 2017 (102 wRC+ and .155 ISO) was marginally better than it was in 2016 (95 wRC+ and .115 ISO), but his defense out in center field was atrocious. Through 1,039.1 innings last year, he was worth a league-worst -27 Defensive Runs Saved (DRS). That wasn’t just the worst mark among center fielders, either — it was easily the worst in all of baseball among qualified players (Dexter Fowler‘s -18 DRS was second worst).

Basically, his marginal offensive contributions were completely erased — and then some — by his terrible defense. Getting that contract off the books allows the Giants to continue searching for outfield help while staying under the luxury tax threshold.

And they really should be — according to Steamer, Hunter Pence is the only current outfielder on their roster projected to be worth more than 0.0 fWAR (and it’s only 1.4). Being able to clear that money is great, but achieving their goal of being a contender next season will still require a great amount of work this winter.

Was this the trade San Francisco really wanted to make? Probably not — they’re taking on a financial commitment to what will likely be a declining player as he enters his age-32 season. They also had to send over multiple prospects from their already-thin farm system just to make it happen.

However, Longoria will help fill a cavernous hole at third base and in the lineup, and it allows the Giants to keep trying to cross things off their offseason to-do list without the worry of paying a luxury tax. At the end of the day, they’ll probably take that as a win for right now.