RECAP: Not a creature was stirring 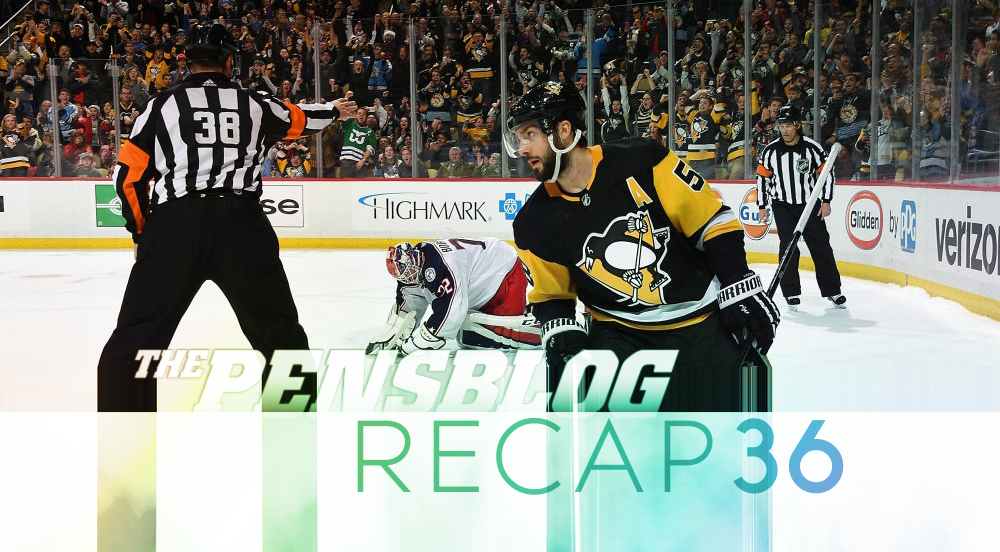 RECAP: Not a creature was stirring

Man, the Pens needed this one. A loss would have dropped them to last in the Metro, and boy, oh boy, would that have been a harsh reminder of an era we’re all still trying to forget. Two Cups still hasn’t erased the memory of Mike Johnston staring blankly off into space.

It’s still unreasonably early in the season to be labeling games as “must win” but at some point you have to acknowledge that the ship is straying too far off course. Last night, the Pens acknowledged as much — it was fairly evident the intensity level was a little higher for this one, seeing that both Sidney Crosby and Evgeni Malkin decided they needed to throw punches at separate junctures in the contest. At first, I hated the idea of the best two players on the team dropping the gloves but then I remembered that the Blue Jackets lead the league in punchable faces/60 so I sort of understand. Plus, if this is the kind of shit they’re going to have to do to break them out of their funk, so be it.

But it wasn’t just the fighting, the Pens actually played a pretty sound, 60-minute (plus) game last night. Even without the fights, the game had a playoff feel to it and it needed to be that way because if there is one thing John Tortorella knows, it’s losing in the playoffs. And it’s amazing that despite how disappointing this season has been so far, you still see glimmers of what made this team a back-to-back Stanley Cup champion.

It happened. As mentioned, this game was a bit chippy. Ryan Reaves hasn’t been doing much of anything in his five minutes per game but he stirred up some shit and I guess that’s what they’re paying him for…

Ryan Reaves hammers Hannikainen and then finishes his fight with Sedlak in like 3 punches, what a shift pic.twitter.com/uNmpAj6xYQ

I’m guilty of falling into the trap of thinking Ryan Reaves was a useful player when the Pens traded for him. I’ve since learned from mistake and agree he’s about as necessary as buying cheap toilet paper or wearing your letterman jacket after graduation. It’s an easy mistake that anyone could have made deep in the moment, so there’s no need to cast shade on anyone. Just like Bitcoin, if enough people agree something imaginary like grit and toughness is real, then it has some value. I’m pretty sure by making that conclusion I’m now qualified to be an NHL GM.

Business started picking up when the BJs took 1-0 lead. Later, the fisticuffs began. They say in order to truly master a subject you have to be able to teach it to someone else and this right here is proof in the pudding as Crosby and Malkin rightfully followed Reaves’ leadership and fairly decisively lost both their fights.

What we learned from watching years and years of hockey is that willingly throwing your fists into a plastic helmet is what really gets a team going. I think if the snowflakes who oppose fighting in hockey were really serious about their stance they would be more focused on the real issue and push for helmets to be removed from the game forever. The NHL has always been a one step forward, two steps back type of league and their approach to player safety when it comes to forcing players to wear helmets is clearly a joke. Back before hockey players wore helmets there were virtually no concussions in the NHL, look it up. Find me one diagnosed concussion before the year 1950. You can’t.

With a three-minute power play and Crosby, Malkin and Letang all in the penalty box, the Penguins were poised to strike and tie the game at one they did.

Patric Hornqvist is a meat and potatoes guy on a caviar team and damnit if he doesn’t show how much he was missed here. A net-front presence is the best present and Hornqvist is the gift that never stops giving. Keep this guy in Pittsburgh until he’s 50. He already skates like he’s 50 so you wouldn’t notice him losing a step he never had. Who needs skates anyway when all you need to do is stand in front of the other team’s goalie and take crosschecks? Love Hornqvist.

It wasn’t long before Crosby and Malkin hooked up again to put the Pens ahead 2-1.

He wasn’t on the ice but give Reaves the assist for inspiring these two and showing them the right way to play the game.

The Pens would later be guilty of having too many men on the ice but like they say, if you aren’t cheating, you aren’t trying. Kudos to Mike Sullivan for continuing to try to play that card. Anyway, the Jackets took the power play and tied the game.

On to OT we would go where Jack Johnson didn’t quite have enough credit to buy a goal and hit the post. Bar is better than bankrupt — that’s what I always say. As it turns out, neither team could find the bank and the game would go to a shootout.

IF you haven’t checked your calendars, and judging by the delayed shipping estimates from Amazon you have, it’s Christmas and the Pens’ annual video is out…