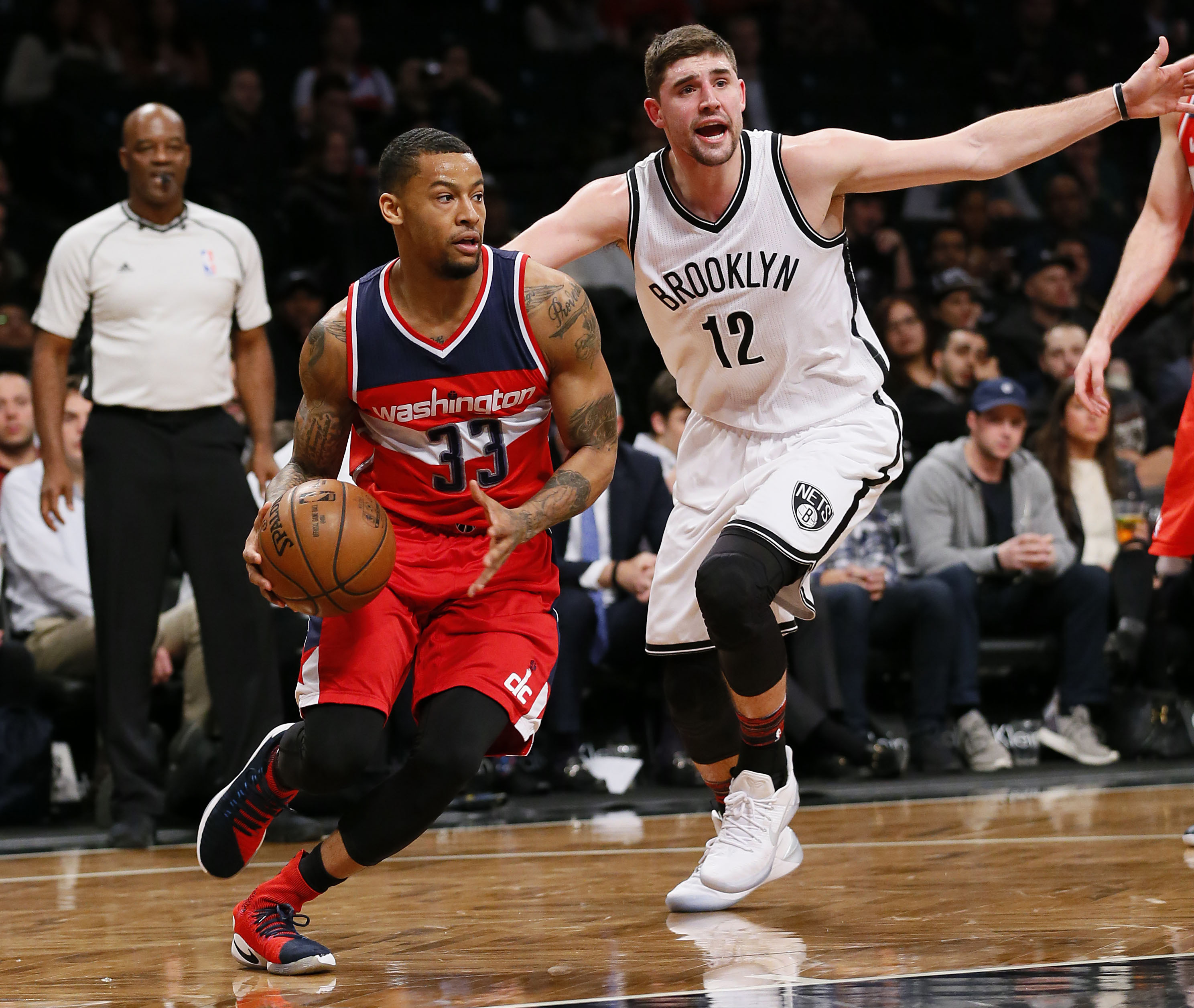 Two months after a tough loss in the NCAA Championship game, Trey Burke was set to take the next step in his basketball career. He didn’t have to wait long for his name to get called as he sat in the Barclays Center during the 2013 NBA Draft.

As the boos rained down in the Barclays Center, then-commissioner David Stern approached the podium on the stage and announced, “With the ninth pick in the 2013 NBA Draft, the Minnesota Timberwolves select Trey Burke from the University of Michigan.” Following a draft night trade, the former Michigan Wolverine ended up in Utah.

After coming off the bench in his first two games as a rookie, Trey Burke went on to be a starter for the remainder of the season. He made the NBA All-Rookie First team while averaging 12.8 points, 5.7 assists and 3.0 rebounds per game in 70 outings.

The Jazz finished last in the conference, which resulted in a top five pick in the 2014 NBA Draft. With their first round pick, Utah drafted another point guard in Dante Exum. The Jazz also added a new head coach, Quin Snyder. Coming off an All-Rookie First Team selection, the four-year NBA veteran believes the changes affected his confidence and mentality, but he has grown and learned from that experience and it’s made him a stronger player today.

“I was 20 years-old,” Burke told KnicksJournal.com. “It had never happened before. They brought in a guard the next year after I was All-Rookie First Team. It did mess with my confidence a little bit. This game is just as mental as it is physical. I think it messed with me. But now growing from that [and] learning from that experience, I know going forward it won’t mess with me anymore because I’ve been through that and it’s made me a stronger player.”

After his rookie season, his playing time slowly decreased. Burke played a career-low 12.3 minutes per contest last season with the Washington Wizards. With four years under his belt, the Michigan product described his professional journey as a roller coaster.

Looking back on his career, Burke stated he wouldn’t have taken the opportunity for granted. The 25-year-old guard has learned a lot in his professional career and believes he’s ready for his second chance.

“I think I wouldn’t have taken the opportunity for granted when I first got drafted,” the 6’1″ guard said. “I wish I had more of a wake up call earlier in my career. But now, the beauty of it is that I’m going to get another chance. A lot of people are starting to see what I can do, leading the team. One thing that I learned by myself is that I’m resilient. Being resilient through good and bad. In this league, you can’t be too high or too low. You have to keep that balance cause it’s too many games. You’re traveling all the time, so you have to find a way to just stay balanced through the whole journey.”

While he’s had some offers from some teams like the Oklahoma City Thunder, Houston Rockets on a two-way contract, and New Orleans Pelicans just to name a few, the 6’1″ guard took a different path to receive another opportunity in the NBA.

Instead of taking a backup role in the NBA, Burke joined the Westchester Knicks with something to prove. By playing in Westchester, he has the opportunity he may not have gotten in Oklahoma City. There could have been a chance that he wouldn’t have received consistent minutes that he’s getting in Westchester.

It’s been almost two months since the former NBA guard has started his new journey in the NBA G League. While he’s a known scorer, Burke has taken a new challenge. With a new roster that consists of six rookies and no returning players from last season, Burke has taken the role as the leader on the team.

Through the first 22 games of the season, the NBA vet has experienced success in the G League. He has been a solid penetrating guard who can get to the rim with ease. Despite being 6’1″, he can navigate his way to the rim through traffic. He’s taking great strides as a shooter and is posting his best shooting numbers in his fifth year of his career. He continues to get the team involved and puts his teammates in good positions.

The Dub Knicks currently sit at 15-8, good for second place in the Atlantic Division. With 10-day contract  opportunities opening up on Jan. 5, it can be difficult playing a role in the team’s success while maintaining a goal in getting another opportunity in the NBA.

“It’s tough,” the Westchester guard said. “Any given week I hear guys saying, you’re not going to be down here long. Any given week, I could get called up. That goes back to staying in the moment. Staying in that one day at a time and not looking forward to the future. Just letting it play out. I guess that’s the beauty of going through life. You never know what’s going to happen.”

Through the challenges, travel, success of the team, and potential call-up, the Westchester guard spoke on his motivation in his short time in the G League.

“Just not getting satisfied,” Burke stated. “As a team, we’re seeing a lot of success. And personally as well, but not getting satisfied. Growing everyday. I think as a young player when I would have 20 point games with Utah and I would have some big games as a rookie [and] as a sophomore, I would get satisfied a little bit. You tend to let it lead over to the next day. But when you have a bad game, you can’t let that lead over into the next game. So it’s the same thing with a good game. You have to erase it.”

Burke continued: “You have to have short memory, so that’s been a challenge for me. Growing more in that area is getting over yesterday regardless if it was good or a not so good day. Take it one day at a time. Embracing the process and not looking forward.”

While Burke has described his journey as a roller coaster, roller coasters present participants with a photo opportunity. When Burke gets another opportunity in the NBA, his photo will be the moment he checks into his first game since April of 2017. Like the cliche, that photo will be worth a thousand words.