Islanders falter in second period and fall to Bruins, 5-2 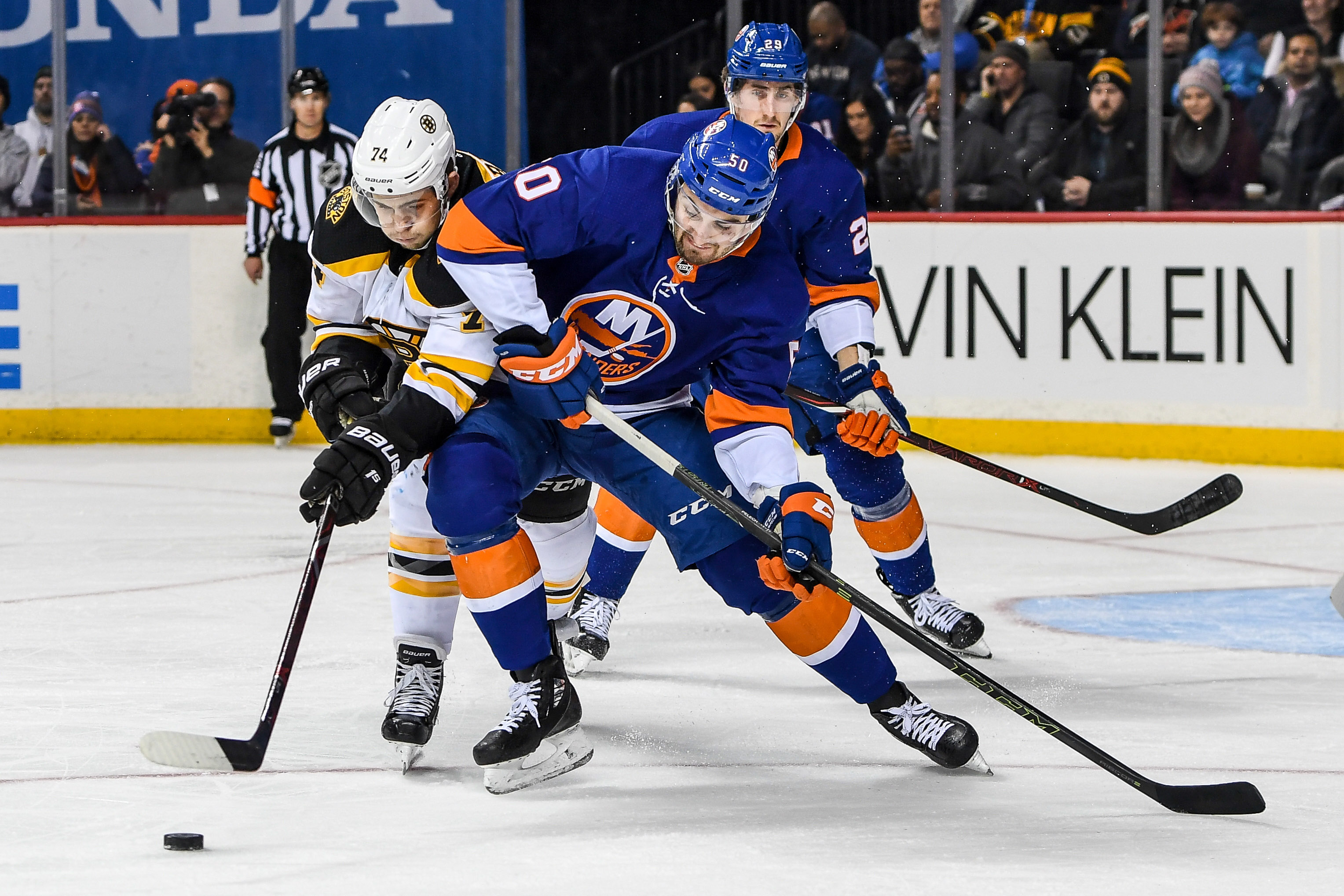 Islanders falter in second period and fall to Bruins, 5-2

An all too familiar storyline played out on the ice of the Barclays Center on Thursday evening. The Islanders gave an impressive first-period effort and ended the opening 20-minutes tied at one with the Boston Bruins, but that quickly disappeared in the second period as the visitors scored three unanswered goals and added two in the third for a 5-2 win over New York.

The Islanders managed to score first for the fifth straight game, but much like their previous contests their opponents quickly rallied to push the Islanders back on their heels. New York has continued to struggle in the second period this season, an issue that became quite apparent during the Islanders’ five-game losing streak and has been a persistent problem since.

“It’s frustrating, obviously, you feel like to those points you’re right in the game and then they get a couple quick ones,” Josh Bailey said. “Then you feel like you’re chasing it. It’s tough to win games having that happen. Sometimes these things just happen and I don’t know what the rhyme or reason is, but it seems like during those times of the games they’re getting a couple and then we’re chasing it.”

The loss pushed the Islanders further away from a playoff spot with the New York Rangers defeating Buffalo Sabres on Thursday night.  They could also fall further back of the Pittsburgh Penguins as well depending on the results of their game out west against the Los Angeles Kings.

The Islanders were one point behind both teams in the wild card race entering Thursday night and also have the Philadelphia Flyers and Carolina Hurricanes nipping at their heels.

It was a whacky goal by Ryan Spooner at 9:47 of the second period that broke a 1-1 tied. The Islanders won a defensive draw, but the puck went by both Jason Chimera and Ryan Pulock and Spooner was able to knock it through Jaroslav Halak.

The Bruins made it a two-goal game less than five minutes later when Patrice Bergeron scored his second goal of the game while on the power play. A shot from the point from Torey Krug hit Adam Pelech in front of the net and ricocheted to Bergeron, who snapped the shot by Halak.

Bergeron completed the hat trick with a goal 3:45 into the third period to put the Bruins up 4-1. John Tavares scored late in the game to bring the Islanders within two, but Brad Marchand scored an empty-net goal to seal the win.

“It’s a tough break,” Islanders coach Doug Weight said. “With a couple different decisions in the second where we didn’t keep turning them. That’s by far our best two periods in five, six weeks. It’s tough, a little bit of fragileness, we’re young and got some injuries. It gets to be 3-1.

“We have to fix our special teams. Our power play has been good until about two weeks ago and it just zapped everything from us in the third, and then the frustration comes in.”

The Islanders second and third-period performances marred what had been a strong start from home team against a red-hot Bruins squad. The Bruins looked fatigued from having played the previous night in Boston and the Islanders were pouncing on that.

New York had held Boston to just two shots through 13:41 of the first period and Jordan Eberle gave the Islanders a 1-0 lead 7:35 into the game. It was the Bruins third shot of the game that tied things up at one and started Bergeron on his way to a hat trick.

“We didn’t capitalize on our chances. I like the way we came out and started the game, there was a lot of energy and pace and it seemed like when they got their second one we kind of just sat back and we didn’t really respond.” #BOSvsNYI pic.twitter.com/8UmPq255LR

The Islanders had been 16-1-0 when they’ve scored the first goal, but have now dropped two games where they’ve opened the scoring.

The Islanders have now dropped two games in a row and will head on a three-game road trip out west beginning on Saturday in Chicago.

This and That… Josh Bailey returned to game action for the first time since suffering an injury against the Pittsburgh Penguins at the beginning of the month. Bailey saw 21:46 of ice time and finished the game with an assist… John Tavares scored his 25th goal of the season in the Islanders loss. He is currently fourth in the NHL in goals scored and second on the Islanders in goals scored… Nick Leddy led all Islanders in total ice time with 23:27 and Jason Chimera saw the least amount with 9:48… Mathew Barzal, who registered an assist on Thursday, has 11 points (three goals, eight assists) in his last five games.