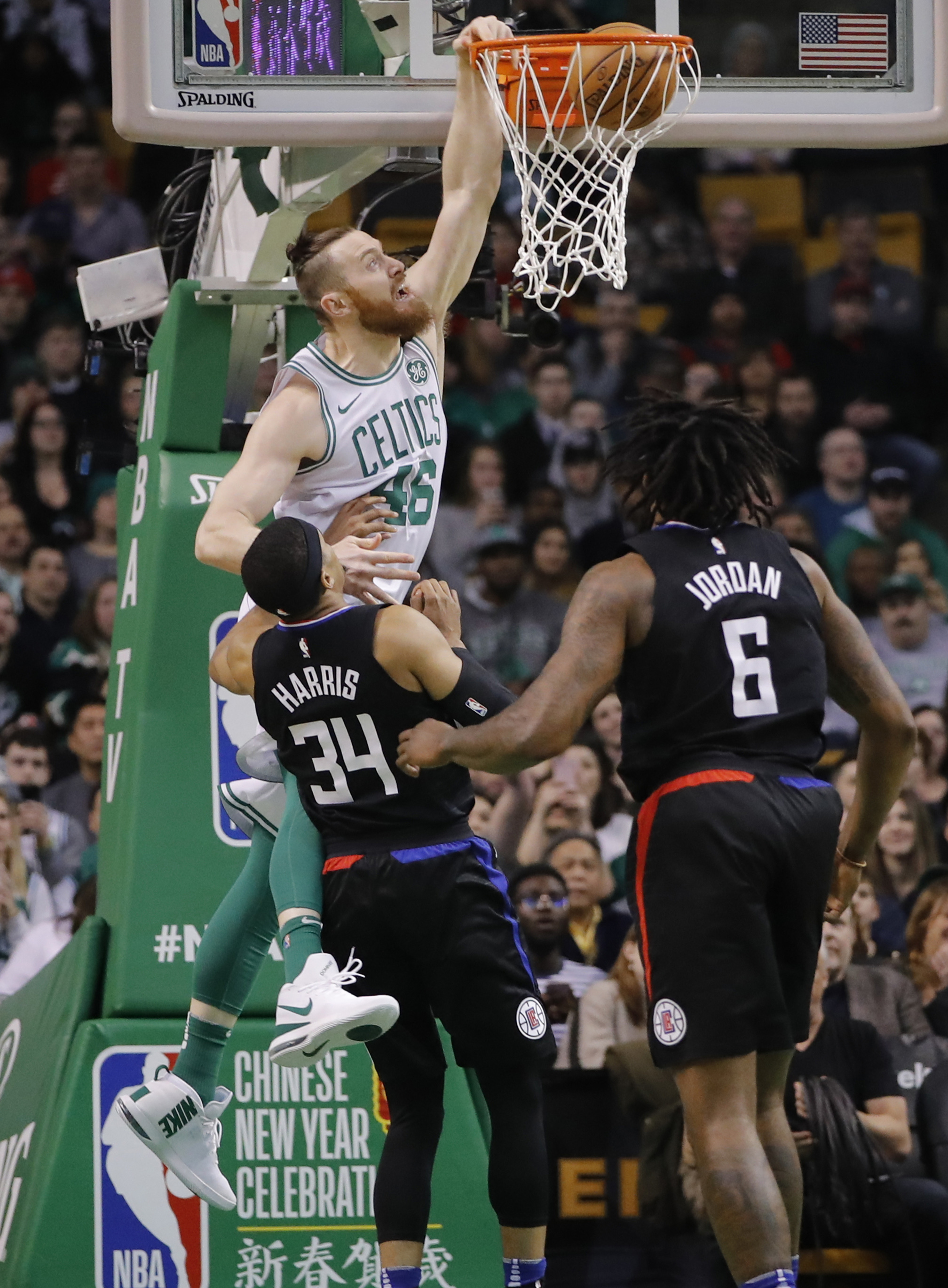 Kyrie Irving dropped 33 points along with 8 assists, while Marcus Morris had his second double-double of the season with 13 points and 11 rebounds off of the bench. After trailing for the majority of the game, Boston had their chance to clinch the victory when Terry Rozier’s three pointer gave the Celtics a four point lead with just under 10 minutes remaining; but the Celtics simply didn’t make the necessary stops on defense. The Clippers outscored the Celtics 34-20 the remainder of the game and will head back West winners.

The Celtics D has now given up season-high points in back-to-back games. Boston has dropped two in a row and now falls two games behind the 1st Place Raptors in the Eastern Conference Standings. They’ll use the All-Star break to regroup and hopefully come back better then ever.

The skid brought about a familiar trend for this team: when their shooting is off, the shooting turns ALL THE WAY OFF. Tonight they made just one out of every three shots in the first quarter. That’s right, the Celtics shot just 33% from the field to begin the game. And though you may think I should be crediting the Clippers defense, you’ll have to trust me on this. It was the hometown team missing open shots left and right and it was beyond frustrating.

Boston went almost an entire half-quarter waiting for another person to score besides Brown, Baynes, or Horford. All the while, DeAndre Jordan was eating against the weak Celtics D (which is what they’ve been lately: weak) despite Brad getting Theis and Monroe in early to try something different. The Celtics went to Q2 down 34-25. If it weren’t for the Celtics bench, which outscored their counterpart 11-3 during the quarter and provided the spark early and often through out the night, the score would have been downright out-of-hand already.

The Celtics were wise enough to exploit their size advantage by putting Jaylen in the post whenever he was guarded by smaller players such as Austin Rivers or Milo Teodosic. This was mildly successful, but didn’t result in the breakout game Stevens and Co. were hoping for.

Random positive note for a moment: it was a thing of beauty watching Kyrie, Terry, Al, and Jaylen run the floor after a missed attempt by the Clippers. The group shared the ball until eventually finding Al underneath for the easy two, but the whole transition was the true highlight for any hoophead. The Celtics starters found their legs in Q2, and they were led by Kyrie Irving who scored 11 of his 14 points at half during the second quarter.

Horford gets the dunk after patient, smart team basketball! 🙌 pic.twitter.com/iulz1DBury

Boston’s bench remained the true catalyst for the team, though. Microwave Morris (9 points, 5 rebounds) and Tough-Time Terry (7 points, 4 assists) battled back and forth for the right to score seemingly every possession that Kyrie had been on the bench during the second quarter. Speaking of Tough-Time Terry- the biggest shot of the first half came from the Celtics’ bench bulldog, as Terry awkwardly drilled a 3 with a defender in his face (he got fouled but no call was made) as time expired in the half.

Rozier hits at the horn! pic.twitter.com/FUM1Kct5dk

The Celtics had yet to lead in the game, but they did come back from down as many as 14 points to make it just a 4 point defecit heading into the second half, 61-57. The Clippers were led by DeAndre Jordan (14 points, 6/8 from the field, 7 rebounds), and D. Gallinari (13 points, 6 rebounds), while Kyrie Irving (14 points, 4 assists) and Al Horford (8 points, 2 blocks) were Boston’s point leaders.

Baynes got the start tonight but quickly earned three fouls chasing around Gallinari and Harris (the pair then went a combined 9 for 9 from the line during the first half, so those fouls weren’t his best work). When he returned to begin the second half, Baynes immediately made his presence felt by tipping home his first missed attempt, feeding Jaylen as he cut down the lane for an easy 2, and by banging his turnaround hook shot. It was certainly a stand-out 10 minute stretch for the Aussie Hammer that was perhaps fueled, in part, by his fear of losing playing time to the newly acquired Greg Monroe.

Irving goes behind the back to find Baynes who knocks down the hook shot! pic.twitter.com/uHUz0xxhpc

The Celtics took the lead ever so briefly shortly thereafter, but it never felt as though Boston had control of this game. The offense wasn’t the problem, though: the Celtics had no problem scoring, they were 9 of 16 from the field through about 10 minutes in the third quarter. The defense, meanwhile, was slow to the spot on their rotations and didn’t appear to communicate as needed. With each passing game getting worse defensively, it’s becoming increasingly difficult to NOT look at Marcus Smart as the little engine that makes the car ‘go’ on that end of the floor.

Later, when Kyrie added another three pointer to give himself 15 in the quarter and 29 total points in the game, the Celtics still found themselves trailing 93-91 at the end of Q3.

The only Clippers player the Celtics seemed to have any answer for through three quarters also happened to lead the League in 4th Quarter scoring. So while Lou Williams had been stifled thus far (he shot a surprisingly putrid 1 of 8 from the field through three quarters), we knew this wouldn’t last much longer. Sure enough, like clockwork, Williams came out firing in Q4 and seemed as though he were on his own personal John-Wick-esque mission to put the Celtics away for good. Lou made 5 of 10 shots during the fourth quarter and finished with 19 points (16 of which came during that final frame) in addition to his 6 assists.

Jaylen Brown once again demonstrated a drive to win by hustling for loose rebounds and ensuring that he finished every opportunity he had with points scored during crunch time; whether it be via the floater through the lane or a corner three with mere minutes remaining. Jayson Tatum, likewise, flashed in the fourth when he made a defender look silly with a cross over and finished at the rim; but most impressively he hit a clutch free throw while the Celtics were trailing late in the game but within shouting distance. It was great to see the two young guys with their heads still in the game after a forgettable start to the game for everyone.

Ultimately, like so many games we’ve seen from this team recently, the Celtics defense was the main culprit in this loss. Their offense consisted mainly of Kyrie (33 points, 8 assists), and Horford (20 points, 4 rebounds), but was stable enough to carry four other players that scored in double figures in addition to these two. While we mentioned DJ and Lou-Will feasting on the Celtics lack-of-defense tonight, Tobias Harris (21 points, 8 of 16, 8 rebs) and Danilo Gallinari (20 points, 9 rebs, 10 of 10 FT) also had quietly successful nights shooting from all over the floor. After Terry Rozier gave the Celtics a 4 point lead with about 10 minutes to go, the Clippers outscored the Celtics 34-20 the rest of the way and left Boston with the win.

What The Hell Just Happened?

The Celtics bench was outscoring the Clippers by a score of 22-12 at halftime. LA eventually beat the Celtics in bench points by a score of 38-36 thanks to Lou Williams 16 point outburst during the 4th quarter. Marcus Morris and Terry Rozier did their part with 13 points each, though. Here are 3 of Morris’:

Baynes gets the block on one end, then Morris hits the transition 3-pointer! pic.twitter.com/1TH6UjmU7M

One of the few highlights tonight where the Celtics were in the lead. If you didn’t watch the game, just savor this moment and enjoy the All-Star break. You know there’s no use in watching the replay when this is a main highlight.

At least this was pretty? Also, it should be noted that Tatum was lucky to reach double digits in points tonight (10), as his final three was in garbage time while the Clippers weren’t playing D. Lou-Will did the same thing, though, so oh well.