Top 10 Tribe Minor Leaguers Most Likely to Debut in 2018 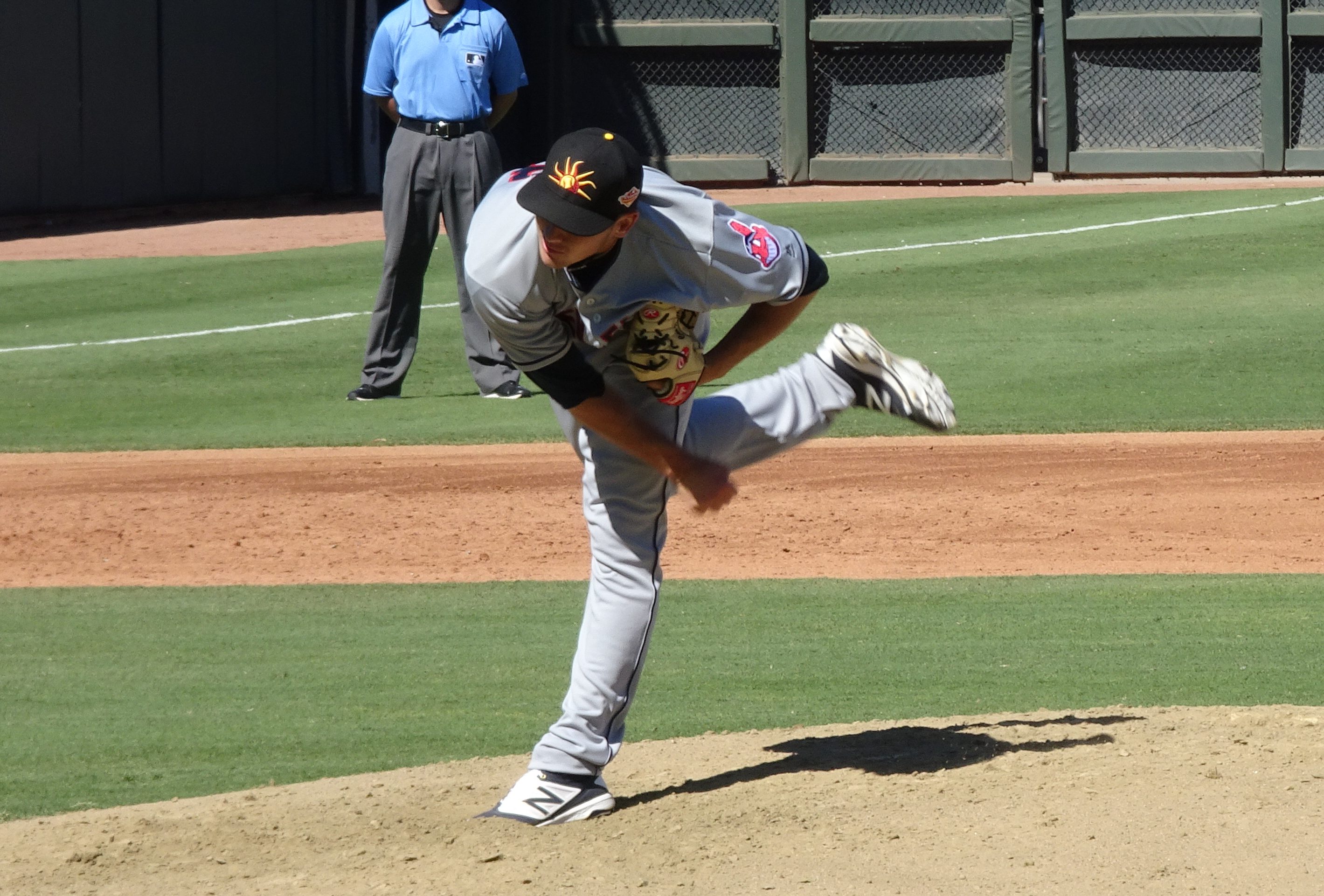 Top 10 Tribe Minor Leaguers Most Likely to Debut in 2018

Whether promoted from the jump, for a mid-season cup of coffee as an injury replacement or as a September call-up, there is no point that signifies the culmination of a minor leaguers journey than their Major League debut. In 2017, the Indians had quite a few big names make the leap including Yandy Diaz, Bradley Zimmer, Francisco Mejia and Greg Allen. In 2018, we should expect quite a few more.

While this list isn’t in any particular order and he sits fourth on the Indians catching depth chart, it is difficult to imagine an Indians season in 2018 that doesn’t feature Haase at least as a September call-up. He was added to the 40 man roster after the 2017, so he will burn a minor league option in 2018 whether he is called up or not. In addition, after a really solid season both offensively and defensively in Akron last year, there is little reason to believe he isn’t ready. The best part for the Indians and Haase is that he won’t be forced into a starting position before he is ready as his only real chance to hit the Majors before September is if Roberto Perez or Yan Gomes were to get injured and if that injury were long term, the spot would certainly go to Mejia. Given what has happened in the last few years, however, one of Perez or Gomes getting hurt at some point in 2018 almost seems a given.

Even more certain than the Indians needing a third (or fourth) catcher in 2018 is the need for an 8th or 9th or 10th…member of the bullpen. Kyle Crockett and Shawn Armstrong are gone as are Joe Colon, Jeff Johnson and Dylan Baker from the upper minors. Needing an arm that could be servicable, but without a high enough ceiling to worry about things like service times or options, Head (who turns 28 in April) could be the perfect option.

Head is not on the 40 man roster, but has been invited to MLB camp in Spring Training. He has seen a lot of success in short relief since being drafted in 2012, but time is definitely running out on the righty and if he doesn’t break into the 40 man roster by the end of 2018, he’ll be lost to minor league free agency. While this wouldn’t be devastating for the Tribe, the fact that they also need someone to take Armstrong’s place as the back and forth reliever from AAA to Cleveland makes him a likely addition.

Hill has a similar reasoning to believe he will debut in 2018 as he is near MLB ready and could be a depth option, but he doesn’t have the short time line. He will begin the upcoming season at just 23 years old and is yet to play significantly in AAA. He isn’t a flame thrower by any measure, but has significantly better command than Head and could be an interesting low end reliever.

The final of the trio of not particularly interesting right handed relievers is Martin. Like the other two, he is not a lights out, swing and miss artist and has decent control. Martin excels at limiting opposing power, but gives up a ton of hits and is not likely a long term solution. If the Indians need innings, however, after losing Bryan Shaw, Joe Smith and Boone Logan to free agency, he could fill in. Like Head, Martin is among the older minor leaguers at 28 and will be an MiLB free agent following the 2018 season.

After hitting 16 home runs in 2017 after hitting 20 in the previous five seasons combined, the glove first infielder Stamets certainly earned himself a more serious look. Unfortunately for him, the Indians are completely set with a starting infield of Jason Kipnis, Francisco Lindor and Jose Ramirez with Yandy Diaz, Giovanny Urshela and Erik Gonzalez behind them as bench options. Making things more complicated is the fact that both Urshela and Gonzalez are both out of options and must make the 25 man roster in 2018 or be lost to waivers.

With all that being said, chances are a spot will open up at some point in time for Stamets. Since the Indians are likely to only keep one of Urshela and Gonzalez due to the situation, he really only sits behind one player as the Indians utility infielder, just one injury away from the Majors. At worst, he should be a September call-up as a defender and base runner (19 steals, one time caught in the last two seasons).

And thus begins the group of players who could be used if there is great need for extreme depth this year, but don’t have a real chance. However, four of the remaining five players should be with the team by 2019 at the latest. To start, Merrweather is a victim of extreme starting pitching depth, particularly those who aren’t considered top prospects, but could be good enough to be a back end MLB starter or converted to relief.

He was added to the 40 man roster for the first time this winter removing one speed bump on the road to the majors. Ryan Merritt’s interesting situation could remove another. As it stands, there is no room on the MLB roster for Merritt, but he is out of options and could force his way on. If he is included, he would be the obvious next man in if a replacement were needed in the rotation (beyond the six pitchers who are in actual consideration for the rotation). If he isn’t, however, he will be lost to waivers and Merryweather is among those pitchers to be considered after the primary six. The Indians may chose to go to Adam Plutko or Shawn Morimando as both have some MLB service time already, but Merryweather could easily be the most effective out of that trio.

Chang was one of three short stops added to the Indians 40 man roster last fall along with Stamets and Willi Castro and has a slight chance of breaking into the big leagues in 2018. He should be a starter in AAA this year after posting great power numbers in Akron and he should split time between short and third base. Since he is on the 40 man roster, it wouldn’t hurt anything to bring him up as a September call-up, but if one were to make odds right now, there is probably a better chance of him getting traded and breaking into the big leagues with another team than that happening.

After a tremendous 2016 season where he posted an 11.1 K/9 across three levels, Linares began to be considered the Indians top relief prospect, at least in terms of ceiling. He didn’t maintain that success in AA in 2017 and really struggled in the Arizona Fall League, but still sits near the top of the Indians relief options. He should jump to AAA to start 2018 and is a possible depth option for later in the season should he raise his K-rate to 2016 levels.

Bieber warms up prior to a 2017 Akron Rubberducks game. – Jay Alan, BurningRiverBaseball.com

The most conspicuous name missing from this list has to be Triston McKenzie, largely considered the Indians top prospect after burning through the minor league system all the way to high A by the age of 19. At the moment, it appears McKenzie is being groomed carefully and it is unlikely he would be brought in as an injury replacement or reliever, instead expect him to debut in 2019 or 2020 as a full fledged starter.

However, Shane Bieber, who also pitched in Lynchburg as well as Akron last year, could be used in such a roll. In a way, he has been like a minor league version of Josh Tomlin who doesn’t give up home runs (in fact, both his HR/9 and BB/9 are superior to Tomlin’s MiLB numbers) and he could be a solid choice to replace Tomlin in 2019. While there are many pitchers currently ahead of Bieber on the depth chart due to their advanced progression, none of those pitchers have a higher ceiling than Bieber. At some point the Indians will have to clean out the upper minors to make room for the true future stars and if they do that before they are forced to (due to things like the rule five draft and running minor league options) Bieber could be a late 2018 option in either the rotation or bullpen.

This one is a toss up. To compare to another first baseman who seemed to be stuck in AAA, Rodriguez doesn’t have the power of Jesus Aguilar, reaches base less often and is a lesser fielder. In addition, the Indians looked past Aguilar when their best first base options were Nick Swisher and Chris Gimenez. Now, Rodriguez sits behind Yonder Alonso and Edwin Encarnacion and just barely ahead of Bobby Bradley, who should be the regular starter at first in Columbus this year. Rodriguez is included here because he is a prospect who has received a lot of attention over the past few years and if he doesn’t break through with the Indians this year, he never will.