Recap: Celtics Win Back to Back 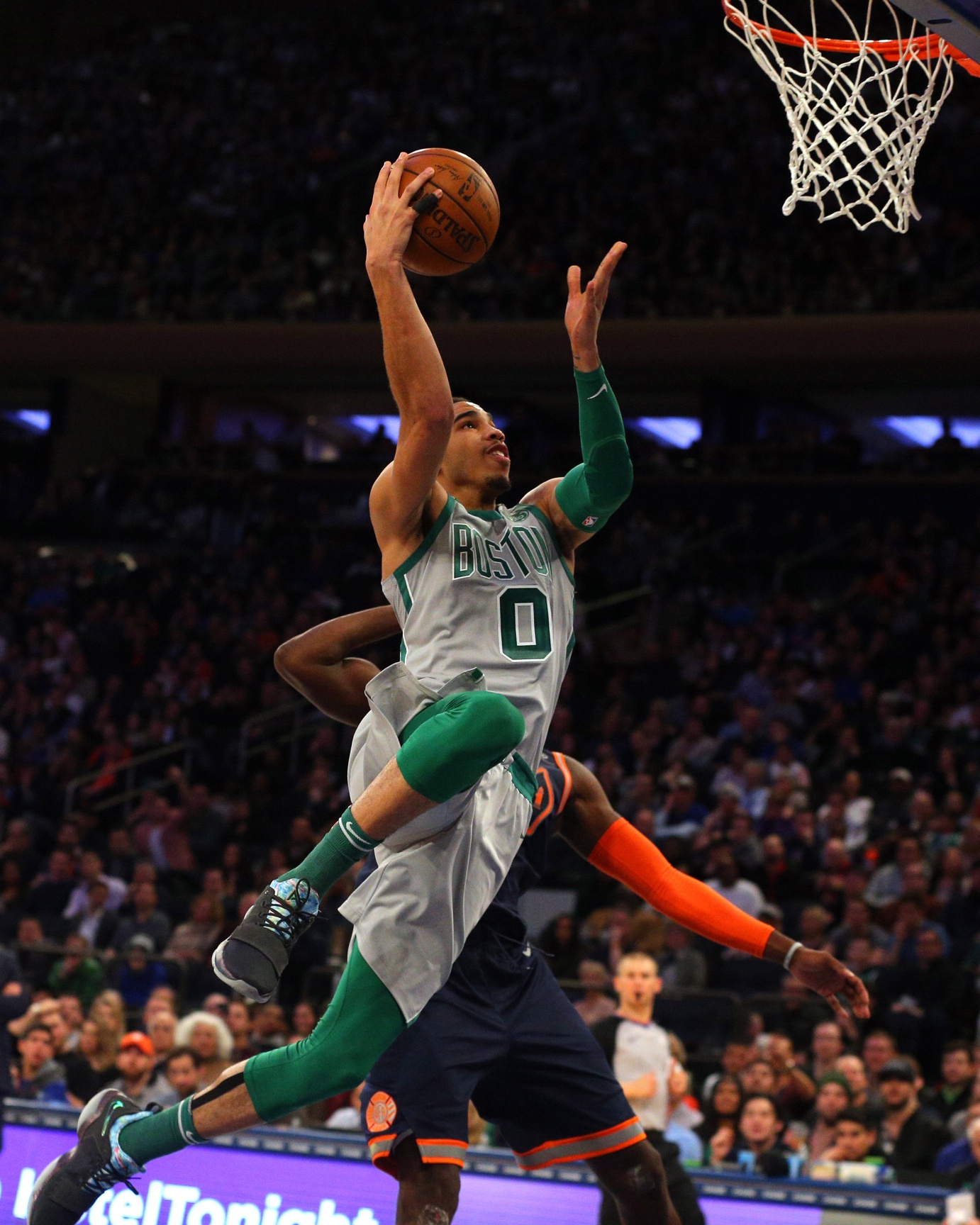 Recap: Celtics Win Back to Back

The Celtics don’t mind the bright lights of the Big Apple. Since 2001, Boston holds a better win percentage in New York’s Madison Square Garden (.684%) than their own TD Garden (.630%), and they built upon that statistic tonight.

The Celtics relied on Jaylen Brown’s hot start and Kyrie Irving’s near triple-double to secure tonight’s win, their second in a row since they’ve returned from the All-Star break. Final Score: 121-112

After scoring a career high in points last night (19 on 8/10 shooting), German import Daniel Theis was called to start against the Knicks due to Aron Baynes’ elbow injury suffered early against the Pistons. The Australian Hammer is no slouch on the defensive end, but the reigning German League Defensive Player of the Year made his presence felt early in the first quarter against Celtics killer Enes Kanter and an ultra aggressive Michael Beasley – who finished a combined 2 for 8 and 4 points after Q1, then scored just 24 between them all night.

It’s a good thing the Celtics defense came ready to play because the offense was slow to start. Jaylen Brown was the lone bright spot as he drilled a couple of corner trey’s and attacked the rim to the tune of 10 early points.

Other than Brown, the leading scorer had been Jayson Tatum with just 4 on a perfect 2 of 2 shooting. Likewise, the Knicks were led by bench player Trey Burke’s 9 points, with their next highest scorer having scored just 4 points thus far. The Celtics stretched their lead to 8 points thanks to a 13-2 run during the quarter, but they were ultimately hamstrung by their 36% shooting from the field. Boston also allowed the Knicks to capitalize on an easy 2 for 1 at the end of the first that relinquished their lead. Trey Burke scored 5 straight points for New York to give the Knicks the lead going into the second, 24-23.

Greg Monroe didn’t look so hot to begin the game, or at any point through out the night, really. His first touch resulted in a brick on a turn around hook attempt, and he quickly followed that up by getting stripped easily during his next touch in the second quarter. The Knicks scored in transition, and meanwhile Monroe was stuck looking at his hands as if they had betrayed him. He’d finish with just 6 points on 2 of 7 shooting and 3 boards over 10 minutes, as the Moose continues to accilimate himself to this Celtics offense.

Marcus Morris looked like he was heating up when he spun his way to 2 points in the paint during the second, but he finished with just 5 points at the half and didn’t score any more in the third or fourth quarter.

After scoring 65 points in last night’s win against the Pistons, the Celtics bench was decidedly pedestrian tonight and managed just 20 points through two quarters. They ultimately finished with just 36 compared to the Knicks 56 points off of the bench, which is an area Stevens will surely highlight when reviewing tonight’s win with the team.

The Celtics offense began to show signs of life, though; and they’d been playing at a great pace during the first half as they amassed 52 shots on 57 possessions over the first two quarters. Unfortunately they continued to shoot terribly from deep (28% on 5 of 18 shooting), and they ultimately allowed the Knicks to hang around by letting them hit on 50% of their attempts from the field. The Celtics went into the third quarter up just 3 points, 59-56.

There were three obvious areas the Celtics needed to improve upon if they wanted to walk away with their second win in as many nights. First, they had to defend the pick and roll better with more crisp and consistent rotations. Second, they had to pass the ball more effectively; because while they scored 59 points during the first half, the Celtics also tallied more turnovers (11) than assists (7). Finally, they had to hit better than 28% of their attempts from three (but, credit where it’s due, the Celtics had outscored the Knicks with 26 points in the paint compared to their 24 over the first two quarters). They achieved all of these during the second half.

The Knicks, to their credit, finally started to exploit Theis a bit by placing Kanter on the lower bock (he’d score 6 in the quarter, all in the paint). Luckily for the Celtics, it was time for Kyrie to go off. After starting the game shooting a horrific 1 for 6 from deep and scoring just 13 points at the half, our All-Star point guard exploded to shoot a perfect 4 for 4 from behind the arc during his 16 point third quarter. The Celtics, mainly fueled by Kyrie Irving’s hot hand, went on a 13-4 run to open up a 10 point lead during the third and controlled the pace throughout. The Celtics officially led 88-81 after three.

After the offensive outburst, the Celtics relied on their defense to secure tonight’s win. While they were unable to hold the Knicks under 100 points tonight; in the end, each of New York’s starters were held under 20 and Trey Burke’s 26 points off of the bench weren’t enough. Boston made the necessary stops down the stretch and there were no final dramatics required to walk away with the win tonight.

Jaylen Brown finished the game with 24 points on 10 of 17 shooting from the field. Kyrie finished with 31 points on 11 of 22 shooting, as the pair combined to score nearly half of the Celtics total points. Final Score: 121-112

What The Hell Just Happened?!

After a less than stellar first half resulted in 5 of 12 shooting from the field and just 12 points for Kyrie Irving, my man played like a mad man determined to win during the third. Chris Forsberg captured the madness perfectly with this tweet.

And one heck of an 81-second stretch … pic.twitter.com/IuEmT4YTeg

You know the Knicks were wondering what the hell just happened after Kyrie dropped 11 points in just over a minute on their D.

Tonight will be an all Kyrie highlight reel in honor of him completely taking over. Here he hits a floater in the lane for one of his few first half points.

Not bad. Not bad at all. pic.twitter.com/IhYEjxPYQI

In addition to his hot shooting, Kyrie also racked up 8 assists tonight.

Kyrie was shooting the lights out during the second half.