RECAP 68: It's Always Sidney in Philadelphia 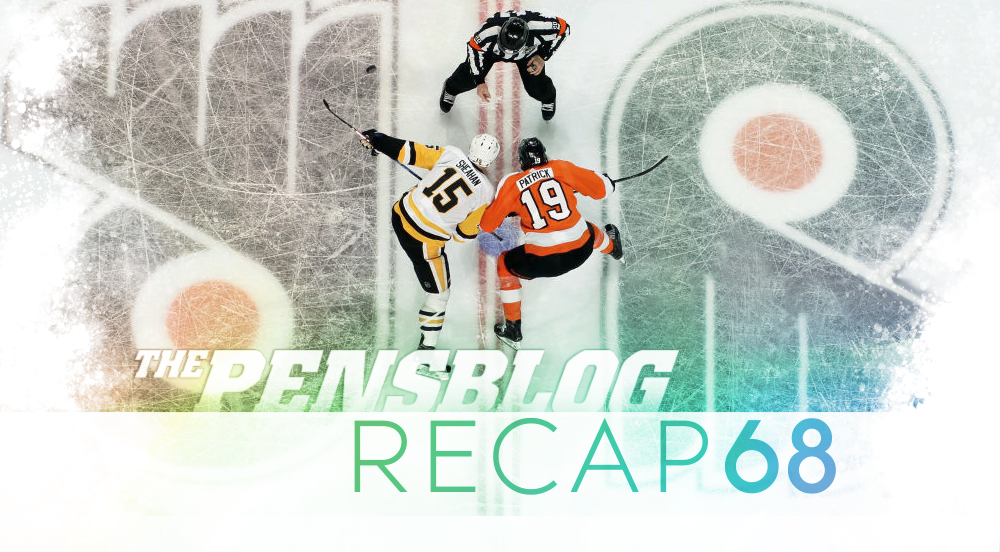 RECAP 68: It's Always Sidney in Philadelphia

In what is seemingly more and more likely of a preview of a first round playoff matchup, the two teams from PA did not disappoint as they competed in Philadelphia for the top spot in the Metro Division, all this despite having been at the bottom of the barrel at various points during the early portions of this seas.  Can’t say too many on either side of the state expected this scenario, but here we are.

Okay then.  Enough of the niceties.

Fuck Philadelphia.  Fuck the Flyers.  Hell, fuck the Eagles while we’re at it.

This one feels good.

This one feels good because there was a significant portion of the Penguins fanbase writing off a team in November coming off back-to-back Cup victories (take a second to appreciate how goddamn asinine that was, kiddos).

This one feels good because the Penguins have gone from outside of the playoff picture to the top of their division, even if it’s only for a day.

This one feels good because it comes as a dick slap to the face of their cross-state rivals.  And it’s not just because the win catapulted them to the top, but because maybe, just maybe the rivalry may be back.

And let’s be fair, there hasn’t been a real rivalry between these two teams since 2012.  Sure, they’ve played each other and some games have gotten heated, but one team has been good since then.  The other team is the Flyers.  Frankly, NHL season is much better when these two teams have a chance at meeting in the playoffs; when the two fanbases have shit to actually talk.

But the kicker?  The Penguins have now scored 15 goals in their 3 matchups against the Flyers, outscoring them 15-7 while going 3-0-0 in those games.  So while the games this season may have some meaning back to them, the Pens are still The Team.  They meet one more time later this month, in Pittsburgh, where the Pens have been dominant all season long.

There is one other reason this one felt so good, but we’ll get to 87 in a minute.  For now, let’s gather to give some thought’s and say some prayer’s to our dearly, soon-to-be-departed Rich.

Lined up and ready for the Battle of PA. pic.twitter.com/9O2q3seF0c

No changes to the lineup that extinguished the Flames on Monday night at the Paint Can.  Jarry v. Mrazek in the cage with Phil! appearing in his 900th game.

These lines wouldn’t last long as Simon and Rust would leave the game with injuries.

At the end of the first period, a period which featured 6 powerplay opportunities, the Penguins were finally able to cash in on their 4th PP chance of the period, which came after Lehtera’s holding penalty, Hagg’s demolition of Rust from behind on a leaping hit, $30M Man Andrew MacDonald’s interference of Conor Sheary (his first positive impact in 6 months), and Lindblom’s high stick with 2:14 left on Derick Brassard.

The Pens PP on the first 3 chances looked one dimensional, lethargic, and overwhelmingly bad, killing their own PPs 2 of the 4 times by taking penalties of their own while passing the puck like they were 3 year olds at a learn-to-skate clinic.  And frankly, had they not scored on their 4th chance, they probably go on to lose 100-0.  That’s not facetious.  Them’s the rules.

After seeing out the final 85 seconds of the period, the Penguins nearly gave up the equalizing goal about 15 seconds into the period after Gostisbehere launched a missile off the bar.  It did, however, set the stage for the Flyera to draw level just over a minute or so later on a comedy of errors from the Pens.  After winning the puck in the corner of his own zone, Brassard fed the puck up the wall towards Phil!.  However, $MacDonald pinched, chipping the puck back to Brassard.  Brassers looked to just skated it out of the zone, but mishandled the puck just enough for Patrick’s work on the backcheck to pay off and turn the puck back in a positive direction.  Ruhwedel was stuck all alone as Maatta and Co. expected the puck to be moved up ice.  Patrick pulled Ruh in enough to throw it to Voracek on the weak side.  Patrick took Brassard to the net as Voracek looked to feed the #2 overall pick, but Brassard would get owned again by the teen, putting it into his own cage behind Jarry.

Just a tough shift for the new guy.  Life is a cruel mistress.

Then, under 4 minutes later, the Flyers would take the lead.  In what should’ve been a routine freezing of the puck for Jarry after the Flyers top line hemmed the Pens in their zone, he kinda bobbled and fucked Konecny’s broken pass all to hell, allowing Konecny to just grease one up and somehow find a way to launch the puck top shelf off Jarry’s pad.  Not a whole lot Jarry could do after losing the puck, but man, you gotta grab that biscuit like you’re at an Old Country Buffet.

But just about 3 minutes later, the Pens were back level.  This time, it was the Penguanos benefiting from locking the Flyers in their own end.  Sid and the Kids were reunited after Rust’s injury and started looking like the line that ripped the league to pieces last year.  Eventually, a Guentzel-Jultz-Oleksiak high cycle came back to the Big Rig for a big shot from the point while Crosby and Guentzel locked horns with Hagg and MacDonald in front of Mrazek.  Through the mass of bodies, Guentzel looked like he got a piece of the shot and redirected it home to bring it to 2s.  The lying and dishonest (bad) media, NHL dot cum, still has it going down as Oleksiak’s goal.  Fake News!

Five minutes later, we’d see the game winner in vintage Pens fashion.  A little dump to the corner was dealt with by Oleksiak, but only as far as Raffl in the far corner after Jultz couldn’t corral the pass.  With some help from Bake, Schultz sealed off the boards and forcing the turnover to Oleksiak in the slot.  With one fell swoop, he hit Crosby in a quick transition, turning Crosby and Sheary loose on a 2v1 on $MacDonald.  Credit to MacDonald for taking away the direct pass to Sheary, but Sid is a warlock and dissected the whole thing before anyone, ripping a pass off the pads for Sheary to bang home and fall down for his second positive impact of the night!

Everyone on Earth knows that the Pens can punish you that quickly on the break, yet not a single team can do a good goddamn thing about it.

The Pens were far from done throttling the orange dicks in the 2nd.  With just under a minute to play, following Crosby ringing one off off the pipe, he and his sons buried another one.

When this team chases pucks down in the o-zone the way that they do, they’re impossible to deal with.  Oleksiak and Jultz played some pitch and catch at the point to open up a lane for Schultz to send one towards the cage.  It went wide, but Sheary was jumping in at the other side of the net to overwhelm Badas and force a panic clear up the boards to Konecny.  Easy peasy for Oleksiak to dummy the kid on a pinch, turning it over to 87 in front of the net.  The Flyers, lost and lonely, couldn’t locate Guentzel in the high slot for the shot that took a nice bounce off Manning and finding its way to Sheary in his natural state again: falling.  He was able to get enough on it to deposit it into the cage, netting Crosby his 3 point of the night and 1100 in his career.

Ah, Sid coming in hot with the pic.twitter.com/hioQ5v7h8W

As of course is tradition when the Pens take a lead into the third, they caved the Flyers in instead of sitting back and defending the lead.  In the 3rd alone, the Penguins took home 55.17% of the even strength shot attempt share and generated 10 scoring chances to the Flyers 6, all while having to kill off a Malkin tripping penalty midway through the period.  They did what they do, taking it to the late stages of the period when Dave Hakstol pulled Mrazek in favor of the extra skater.  Philly pushed, but a Jarry save through traffic at one end turned Sheahan loose to try to ice the puck, finding only Malkin in the Pens zone.  He hit Hags with the outlet, sucked Gostisbehere in and deferred to 71.  Couldn’t find Sheahan and went for a shot himself from center ice to put the final nail in the Rivalry Night coffin.

The Penguina get the next two days off before traveling to Toronto to play the Leaves on Saturday before returning home to host the Stars on Sunday.  Two sets of back-to-backs over the next week, too.  LGP.