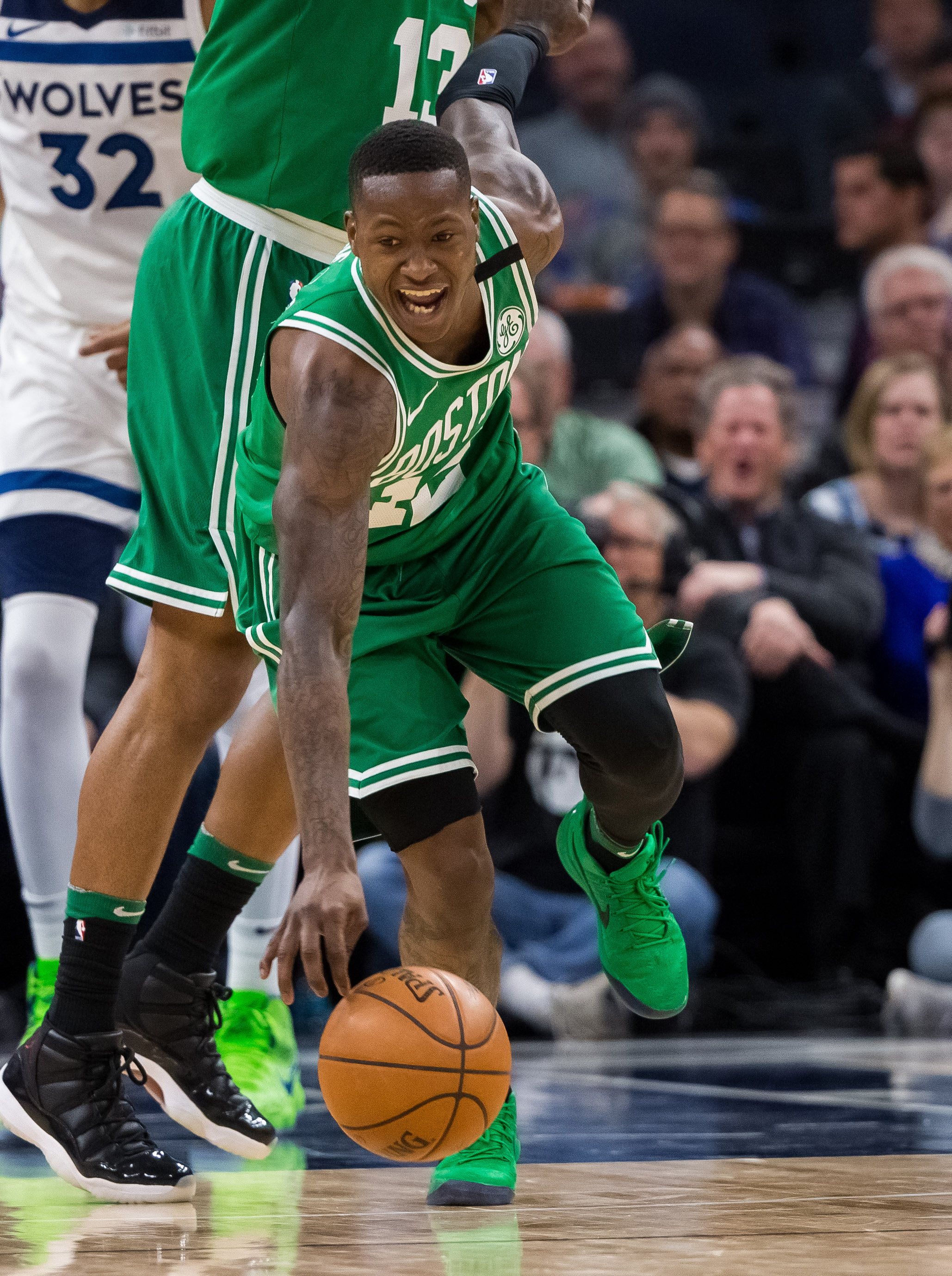 The Celtics had won 5 of 6 since the All-Star break. Tonight they traveled to Minnesota looking to complete their series sweep, while simultaneously hoping to clinch a playoff berth for the fourth straight year with the win. The Timberwolves, meanwhile, were dealing with two losses in a row, and were one of only three teams without a three game losing streak entering tonight’s game, along with Toronto and Golden State.

Minnesota’s last game was played on Friday, a full 6 days ago; but the rest only factored in during the first few minutes of the game, in which the T’Wolves made 70% of their shots, and only garnered them a four point lead. The Celtics were a freight train tonight; it took a little for them to get going at full potential, but there was no stopping or slowing down once they got it going offensively (Celtics shot 49.4% from the field).

Aside from the FG%, there were two main catalysts for tonight’s win. First, the Celtics defense limited the amount of runs the T’Wolves were allowed. We know it’s cliche, but that doesn’t make it any less true: the NBA is a game of runs. Continue reading and you’ll see as much. Secondly, Marcus Morris set the tone early with aggressive bench play- a category the Celtics would more than double the T’Wolves in, by a count of 42 to 20. Marcus Morris finished with 17 points, 5 rebounds, and 2 assists after receiving extended minutes off of the bench.

BUT two final and super important things before we dive in: A) the Celtics have officially clinched a playoff birth now, which is undoubtedly good news, but not at all the end-goal here.  We all know that. Clink the glass of your fellow Green-Teamer, give a tip of the cap, but it’s just another item checked off the list. More importantly..

B) We lost Jaylen Brown to an ugly injury after he landed on his neck/spine area following a dunk in the third quarter. It was definitely scary, but the good news he got up and walked off by himself after a few minutes. For more details, you can read Chuck’s piece here.

It began with Minnesota going 7 of 10 from the field and scaring every Celtics fan at home into believing they were in for a long night (they weren’t). On the contrary, the Celtics seemed motivated to hit the refresh button and put their slow start behind them as early as halfway through the first. Marcus Morris came off of the bench early and provided the desperately needed offensive jolt, efficiently scoring on each of his first three touches.of the game.

As he so often does, though, he became addicted to getting his shot off. The following possession he threw a prayer up as he fell and was damn near on the ground already. It’s truly fascinating to watch this guy shoot when he gets in the zone. He acts like he’s A.I. in his prime sometimes, for real.

But Mook made it a quick 9 points off of the bench after he drained an open corner three, courtesy of great Celtic ball movement. This stretched it to the Celtics highest lead of the game thus far, at 33-26. He even kicked in on defensive end by coming over to double the ball-handler when he noticed Rozier was posted up near the paint and undersized in his match-up. The Wolves couldn’t handle the heat and a forced pass was stolen by Too Nice Theis.

The Celtics also benefited from drawing two (openly questioned by the broadcasters for TNT) foul calls against both Teague and the transformative Karl Anthony-Towns. Regardless of how you feel about the calls, you should credit the Celtics for capitalizing and closing the first quarter on a 14-6 run while the pair of T’Wolve stars sat on the bench. They went into Q2 leading, 33-26.

No more than three minutes later – after a missed attempt by Tatum, no less, so he has a front row seat to the party and Marcus may deliver his revenge properly – Smarf takes off for the offensive rebound with a similar open lane to the basket and teaches the kids watching a lesson.

Maybe it’s the difference in age, or simply NBA experience, but to me Marcus says to the young father and newly crowned 20 year old “look, this is what all those hours at the Ojeyele Factory will get you” here:

Of course, we don’t live in @HebertofRiffs world (despite recent evidence in the mainstream that we may be inching closer), you can’t win simply based off of cooldunksfromcombatmuscles. Timberwolves players showed some fight tonight and went on a 7-0 run later in the quarter to cut what was once a 14 point lead down to exactly half. The Celtics answered with a 9-0 run of their own and made it a new largest lead of the night heading into half.

On top of making over half of their shots (skip this paragraph if you hate numbers), the Celtics defense forced 10 turnovers from MIN and scored 10 points off of those alone. The Celtics checked off basically all of the important team categories at half: 25 vs. their 24 REBS, 53% vs. their 43% FG%, 7 vs. their 10 turnovers, 12 vs, their 2 second chance points; but most importantly the Celtics DOMINATED their bench scoring, 26 vs. their 2 (TWO!)

So basically, they dominated in virtually every facet of the game through two quarters. The Celtics went into the third with their head held high, 60-46.

The Celtics briefly stretched their lead to 20 before the men from Minny went on a 9-2 run to begin the second half. They’re fighting for their playoff lives, and the Wolves eventually made it a 9 point game during the third quarter. As we well know by now, Jaylen Brown has a particular drive to be successful; therefore, much like Marcus Smart or any other well publicized “grinder”, he puts winning above all else. I say this because tonight when the Celtics allowed the T’Wolves back in the game, you could see a noticeable change in Brown’s body language and approach to the game.

One possession early in Q3 he was fed the ball in transition and turned on the WHEELS to beat the three defenders half-sprinting ahead of him, and was rewarded by being sent to the line after an attempt at a dunk. He made both FT’s – he had been relentlessly working on his form to improve upon his slow start at the charity stripe to begin the season, and he’d gone a perfect 5 of 5 from the line through the three quarters he played prior to the injury. His form continues to improve from beyond the arc, too, as the Celtics ball movement allowed him to display here:

Again, the video of his fall and updates regarding his health are posted by @RedsArmy_Chuck right here. In my most brief description: JB finished a great drive to the hoop with a two-handed dunk, his legs swung from underneath him and his body began to flip backwards as he released from the rim, and he landed on his upper-back/neck area.

From that point on I was constantly checking for Jaylen Brown updates, so I can only imagine how difficult that must have been for the players who have a true human connection with the man. The Celtics fell into an understandable short daze and allowed a 9-0 run by the T’Wolves at a crucial time – the start of the fourth quarter. This didn’t set well with anyone rooting for Boston, least of all the coach, who called a timeout and (I’m assuming) reminded his team that “Jaylen Brown wants nothing more than a W tonight”. There’d be no more Timberwolves offensive runs during this game.

Marcus Smart turned on the extra burners and started throwing his body to deflect balls or grab offensive rebounds. Kyrie responded with a quick 6 points and frequently dished to Horford, who got involved with a deep ball first, followed by a shake-n-bake post move with his back to the basket, complete with the fall-away jumper in his defender’s eye to make it a twelve point lead for the Celtics. They maintained a ten to twelve point lead for much of the remaining six minutes of the game and cruised to victory, Final Score, 117-109.

Before we get to highlights – shouts to Kaufman for succinctly wrapping up the Box Score of this game in one tweet.

Strong game for #Celtics and lots of great individual performances.

But, concern for Jaylen Brown (concussion)

I particularly enjoyed the new nickname “All Around Al”, instead of the other beaten down nickname that even guys like myself had ironically trotted out every once in a while. But that’s done with and it’s officially time to pick a side on where you stand with Horford. What do you all think? Average or All Around? Below are more video clips with stats from tonight’s great team win.

Ever since the All-Star break it just seems like the boys are just out there having fun. Here we have Irving with one of his eight assists and an early finish from Horford, who’d end the game shooting 57% (8 of 14 from the field) in addition to his amazing “All Around” stat line posted above.

Terry Rozier and Marcus Morris both came off of the bench for the Celtics and combined to score as more points than the entire Timberwolves bench, as they had 30 vs. T’Wolves 20 total. Here Rozier adds a pretty 2 to cap a Q3 run. He’d finish with 13 points (5 of 10 from the field) with 4 rebounds and an assist.

Theis deserves credit for the handles and court vision he displayed here. He didn’t do much tonight but play solid defense in 10 minutes while contributing a couple rebounds and assists, but he’ll definitely point to this play someday and be like “look! I DID have handles!” to his grandkids, so that’s a personal W:

Theis shows off his handles and finds Monroe for ✌️ pic.twitter.com/3cIAhwP2YA