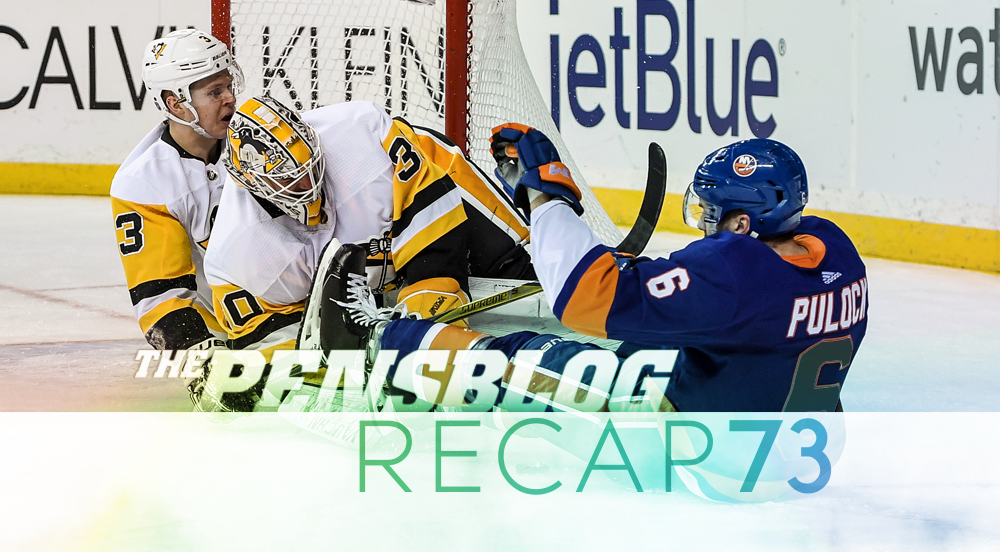 The Penguins were in a pretty nice spot last night, all things considered. Well rested after a five-day break in the schedule, a quick trip up to Long Island to face the hapless Islanders seemed like an easy two points.

Here’s the thing about the Penguins: When the foundation of your team is playing a speed and skill infused game that works best when all 12 forwards are forechecking their asses off, causing the opponent to wear down and take penalties, and all six defenseman are consistently making smart decisions with the puck — nuances of the game that require persistent effort and focus to detail — it becomes pretty apparent when those requirements are absent. It’s fair to say the Penguins, as a whole, were just absent in general Tuesday night.

The good news: Matt Murray is back. He kept it close early — The Isles were humming along and easily could have had a wider margin of victory had it not been for some superb saves from Muzz.

Matt Murray goes from "oh no!" to "yes!" in a matter of seconds. pic.twitter.com/S44DNmJcsi

Unfortunately, the rest of the team was dogshit. Flubbed passes, missed defensive assignments and the aforementioned visual that they’d rather be anywhere else in the world was the theme of the night.

Tough to put too much stock in a game like this, anyway. Games like this one make you appreciate how good the Penguins are when everything is clicking, and how bizarre things are when they clearly aren’t. Their game can be so polarizing — it’s amazing, really. True to life Jekyll and Hyde stuff. Also, one quick look at the standings and it’s clear the game didn’t really mean that much. Not sure the Pens really want to overtake the Caps for the top spot in the Metro. I don’t have to tell anyone about how life is so much more enjoyable when the Caps win all of the regular season titles and die a quick death in the playoffs, usually to the hands of the Penguins.

Will the Pens shit the bed in games like this in the playoffs? Probably. Up and down has been their trademark this season. Fortunately, they have a coach that doesn’t waver. It’ll be interesting to see how Sullivan finds a way to pull it all together when the time comes. The good thing, I suppose, is the East is fairly weak this year. Tampa is still going to give them their best fight and they likely won’t meet until the ECF, if all goes to plan.

Until then, we have nine more regular season games.