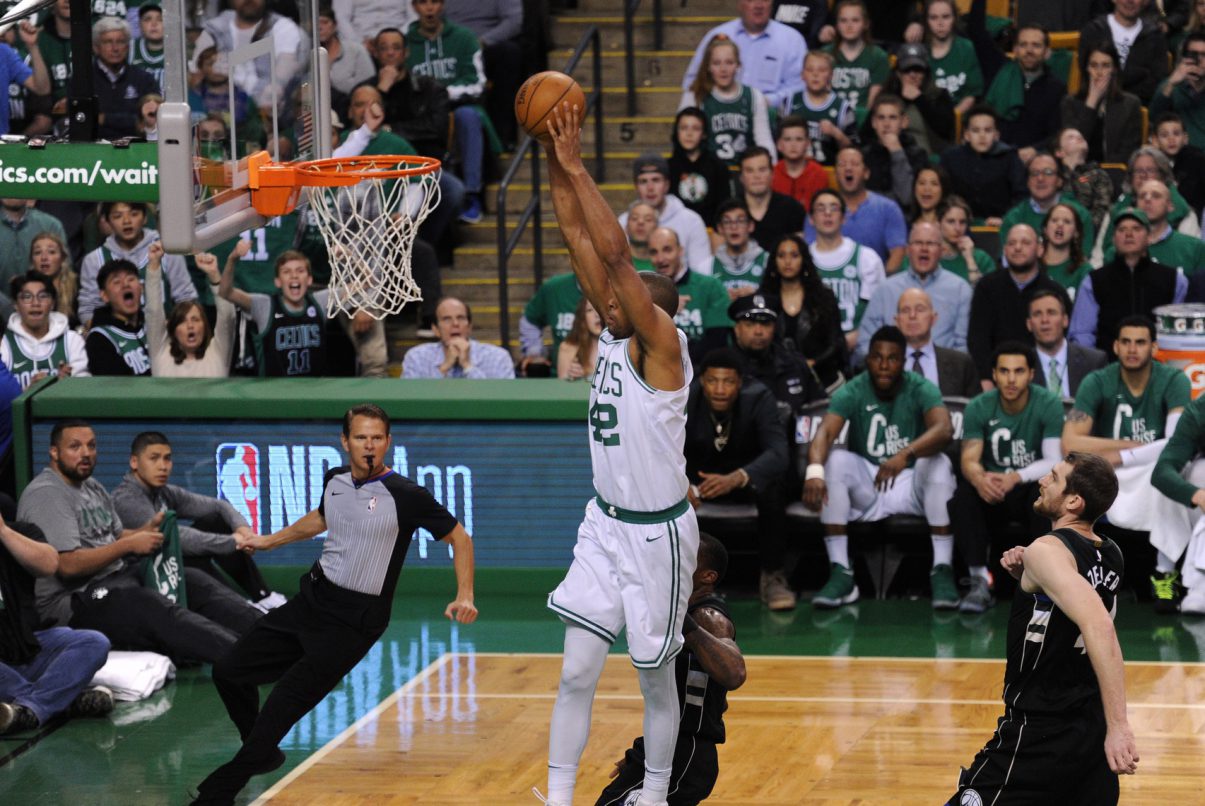 Game 1 of the 2018 NBA playoffs first round between the Boston Celtics and Milwaukee Bucks may have single-handedly given me a bleeding peptic ulcer, and I don’t want to think about it ever again except that the Celtics won. Game 2 better not do that to me.

It didn’t. The first half showed the evenly matched game we’d expect with the Cs down by various injuries, but a barnstorming Jaylen Brown shooting night, highlighted in the third quarter with a solo eight-point run, and the steady guidance of Al Horford ensured Milwaukee had no chance in the latter half. The Celtics improve to 2-0 on the series with this 120-106 win, and for the Bucks, as This Mortal Coil once said, it’ll all end in tears.

Al Horford again took the leadership mantle in this game for the Cs, as he, we and Brad Stevens are all well-aware he must. He made his presence felt on every possession, with the pick and roll between him and Terry Rozier facilitating every movement cleanly for the Boston offense—and getting Jaylen  in position to be its main weapon. Behind the arc, laying it up, dunking, high-post midrange; Brown did it all, even early in the game.

The team as a whole also made as much hay as possible with second-chance points, which saved their collective bacon in Game 1. One of the most memorable of these involved Guerschon Yabusele just barely grabbing Horford’s missed shot from the jaws of Out Of Bounds and swinging it back to Jaylen for a triple. Cash. It was the Celtics defense that guided them through every streak of wins and losses, every injury, every question, and that’s what would guide the team to victory in this series. Defensive maneuvers and hustle are, of course, what drive second-chance points, and in the first half Boston would amass 18 of these to the Bucks’ 5.

This certainly gave the Bucks fits. Although Giannis Antetokounmpo, as expected, scored almost at will, Khris Middleton and Eric Bledsoe were useless until the second quarter. The latter sparked a mini-run in that frame, but through driving and passing, not by his own shot, which was as just off as it was in Game 1. Malcolm Brogdon was by far the more effective guard for Milwaukee, but I have a feeling The Powers That Be in the Bucks front office want to use their shiny toy Bledsoe as much as possible. It could be worse, I suppose: He could be Tony Snell, who after signs of revitalization early in his Milwaukee run has reverted to ineptitude. (Fun fact about Snell: He once racked up a 0-0-0-0-0 stat line, with his only scorable contributions to this game against the Jazz, which the Bucks lost, being one personal foul and two missed shots.)

That aforementioned Bucks run went 13-0 and could’ve been a lot worse if Rozier hadn’t stopped it with a triple at the 8:11 mark. Not coincidentally, Horford and Brown sat that run out; once they returned to the game, things improved considerably. Though Milwaukee never went away during the remainder of the second quarter, the variance of Boston’s weapons—Horford and Brown, Rozier sniping rather than chucking, Mook Morris one-one-oneing it off the bench, Shane Larkin’s maniacal backup energy, Greg Monroe in the post—outweighed the superstar/should-be star power of Giannis and Middleton, who had a game-high 18 points and 10 points, respectively. Tatum was curiously scoreless, but contributed in almost every other category, including two steals and a block. His defensive efforts helped hold Milwaukee to 51 for the half to the Celts’ 60.

Tatum finally got one at the start of the second half, but tonight just wasn’t his as far as shooting goes—sometimes it’s a simple as that, and by rebounding and dropping dimes, he made up for it. And besides, this third quarter belonged to Jaylen Brown. Other people did other things, some of them good things—and I will begrudgingly say that some were done by the Milwaukee Bucks—but the frame was Jaylen’s. He expressed supreme confidence, sometimes serenely, sometimes with hell-yeah swagger. It was his best moment as a Celtic so far, and I have no doubt he will surpass it sooner than we think.

When he slowed down a bit in the latter half of the third quarter, it became more of an all-around team performance, with no specific dominant presence but plenty of highlights: Moose Monroe smashing home lobs from Larkin, Horford sneaking in a jumper, Larkin’s accuracy from deep including a wonderfully cocky buzzer-beater that ended Q3. Though Middleton and Giannis kept pouring on offense, it couldn’t balance out how thoroughly throttled the rest of their players were by the Celtics defense—even in the paint, their usual dominion. That Larkin trey punctuated 36 minutes of ball with a 90-75 lead for Boston.

This fourth quarter would be no brutal war of attrition like in Game 1 if Horford got his way, and he started the game’s final 12 minutes playing like he’d damn well have it. Functioning as ball handler with Moose as his roll man and Mook Morris as his long-range threat, this was some real cool time Point Horford stuff. This run helped the Celtics get past the century mark, far enough away from the Bucks that any mini-runs on their part wouldn’t be a real threat.

Then the Cs just said, “Hey, let’s blow ’em out,” and the squad just started JACKING shots. Morris, Rozier, Horford and Brown all fired relentlessly, making most of them and Brown bringing himself to 30 points for the game. It was cold-blooded revenge on Milwaukee for making Boston deal with that Game 1 OT, right down to Larkin mic-dropping the ball before the Bucks’ final, pro forma possession.

HOT ISH: Jaylen’s firestorm; Horford’s command; Tatum realizing his shot wasn’t going and having presence of mind enough to focus on other aspects of his game; bench strength (40-plus points)

NOT QUITE IT: It’s not inaccurate to praise the Boston defense as I did, but the Bucks did manage to shoot 60 percent (albeit mostly because of Giannis’s and Middleton’s accuracy), which is suboptimal. If more than two Bucks players manage a solid performance, the Celtics might have a problem.

“AVERAGE THIS, MOTHERF****R!” – Al Horford, after the dunk below, in my dreams (IRL he’s far too polite, which is part of his charm)

Al Horford grabs the loose ball and takes it all the way for the slam! pic.twitter.com/Gu71OysPEH

Jaylen Brown is on fire! 🔥🔥🔥 pic.twitter.com/Pu9bEqvh53

Larkin with the swag buzzer-beater:

Shane at the buzzer!!! 💦 pic.twitter.com/dzB5qKP8V1