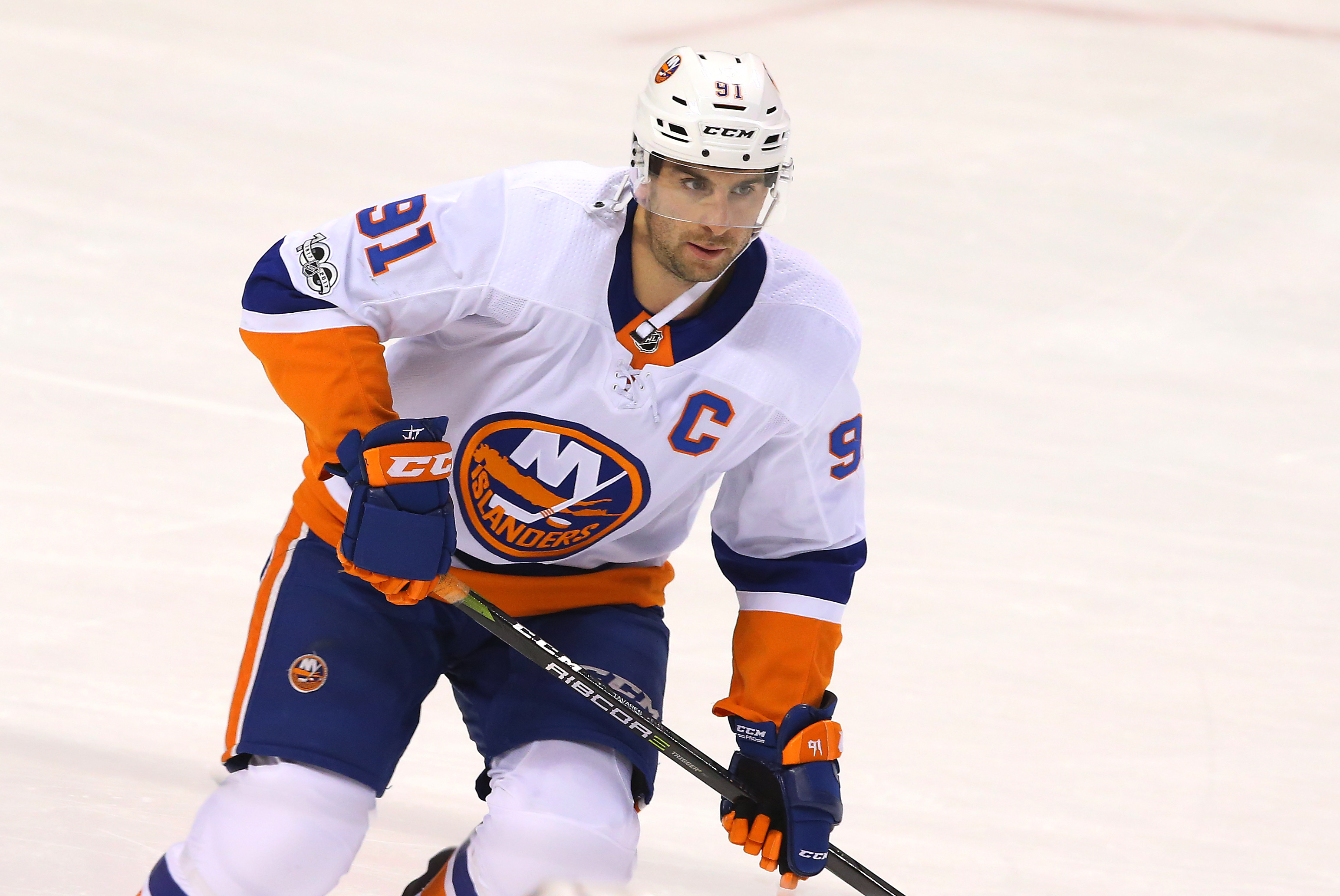 It’s a game, it’s a business – it’s a giant emotion and time suck, being a hockey/sports fan.

We lived all of it on Sunday when John Tavares finally decided to go for the childhood dream opportunity of playing for his hometown Toronto Maple Leafs and leave his Islanders without the best homegrown player they’ve had since Pat LaFontaine, maybe earlier.

Arguably, this might be the worst day in Islanders history, with the once-dreaded move to Brooklyn softened by the impending return to Long Island. Remember how giddy #IslesTwitter was when Lamoriello walked in to take over the team and then relieved Snow and Weight two weeks later before hiring Barry Trotz? Now older than the Coliseum roof.

Even Rangers fans were sad for IslesNation, as were some Leafs fans I know. What team has a true star and lets them get away — especially one who sent Nassau Coliseum into a frenzy upon being drafted only nine years ago as the centerpiece upon which the team would ride back to hockey glory?

IslesNation thought John Tavares would be here forever. Apparently at one point so did John Tavares.

“I want to stay on Long Island… I haven’t thought about being anywhere except with the Islanders,” he said in January with the Islanders’ season slowly crumbling away before the 2-9-3 February that doomed them.

Tavares then proceeded to record just one point in seven games at the end of February into the March trade deadline that Garth Snow made no dramatic moves with. He could have had Tavares and his agent engaged in any extension discussion after last July 1, but instead, they asked for time and no move, no distractions.

If you’re John Tavares, not only do you have a right to explore free agency after nine seasons with only three playoff appearances, but you also have to know the ramifications of a departure given the fact that the Islanders now have absolutely zero to show for him.

One of the first things I thought of when hearing the news — other than what’s Lou Lamoriello going to swing now? – was that January to February stretch last season where the team went 7-16-4 just weeks after Jon Ledecky and Scott Malkin delivered on the promise of a new building and secured the site at Belmont. How could JT and his team not be amped that in a few short years, the operation would be on Long Island again? JT and many of his cohort over the years grew to love LI.

But on their way to the worst goals allowed mark in a decade, the Isles fizzled after the announcement. And when Tavares struggled horribly at a desperate time, I felt there is no way he is thinking about signing up for more of this if he can’t put this team on his back under this Garth Snow and Doug Weight regime.

Many teams across sports have lost their marquee player to free agency. But the meaning behind this loss of an elite franchise player was crystallized best by Tavares himself.

“I did the best I could. I have no regrets about that. I just wish I could have done more. As the leader of the team, I probably didn’t do a good enough job getting more results that we needed and that that fan base deserves.”

Then why did he say in January that he wanted to stay on Long Island as his foreseeable farewell tour and questions from Canadian media mounted? Why did he not engage in any extension discussion from July 1 of last season when he became eligible and instead asked for time and no move? And why didn’t Snow take the bull by the horns and improve the team even more, or trade Tavares? Because he did not want to. And it doesn’t sound like Tavares wanted to be dealt either, though the visions of Maple Leaf sugarplum danced in the back of his mind. Egos or impasse, hard to say.

A big part of the reason Tavares could not do this anymore was simple: increased substandard asset mismanagement by Snow. The writing was massively on the wall after the brief but poignant 2016 playoff victory over Florida that was 23 years in the making.

– Two core players in Kyle Okposo and Frans Nielsen left via unrestricted free agency along with Matt Martin, replaced by Andrew Ladd with a massive contract, Jason Chimera and good ol’ P.A. Parenteau — who was cut in training camp so Anthony Beauvillier and a not-yet-ready Mathew Barzal could both make the team, along with a third goalie in J-F Berube. Barzal played two games before being returned to junior for the season, and the Isles sputtered until coach Jack Capuano was finally let go in favor of Weight. The team rebounded but missed the playoffs by a point.

– The 2017-18 season that started so well went seriously south in December when Calvin de Haan was injured and no moves were made by Snow to address a porous defense – (and yet, Vegas).

– High picks like Nino Niederreiter, Griffin Reinhart, Ryan Strome and Michael Dal Colle had or have had brief to no success for the Isles in a league that is skewing young.

These are only a few instances but loyalty to Snow was not going to bring Tavares championships. If these last two seasons had been successes and the Islanders built off their 2016 playoff breakthrough to become a powerhouse in the Metro, would IslesNation all be in mourning today? I think JT may have been more inclined to stay.

You could see the discomfort and emotion in Tavares when speaking about his now-former club today. Fans were incinerating Tavares jerseys on Twitter, putting him on blast and making some of the worst remarks I can recall. It’s simply astounding how quickly Tavares went from being the beloved, pined-for hero to an arch-villain among Islander fans, despite his very heartfelt words throughout the day. Hey, if I had the chance to play for my boyhood team and live near home I would. But man, would I expect vitriol, deserved or not. That first Leafs visit next season, the hostility will be absolutely brutal for Tavares knowing this fed-up fanbase.

Perhaps Tavares should have played coyer about his free agency and not try to power through the season with it hanging. Fans don’t miss a beat, though they may over-interpret. This past year’s Islanders team was not making the playoffs, and given how these last two seasons had gone, would it have been so tough for Tavares, even with all his loyalty and graciousness, to approach the team and say, “hey, I know we are too far out to make the playoffs, so maybe find a deal for me, get assets and maybe I can sign in the offseason if things look good here?” I think all parties would have signed up for that.

Arguably you do not want Snow making that trade, and many said Tavares should have never been traded, including me. But looking back, seeing how Snow had not produced much success in the trade market or in playoff appearances, and seeing how Tavares was a star in his prime that could walk if not in an ideal situation, it’s clear ownership comically erred in not cleaning out the front office and employing proven builders of on-ice product to run the team. Understandably, part of the equation to attract fans and players and build regard is to have a solid building, which is where Ledecky and Malkin chose to focus. Unfortunately, while that was happening, the on-ice product and the regime that controlled it languished in mediocrity, partially to attempt appeasement for its marquee player.

The fact of the matter is, that however much you feel John Tavares handled his unrestricted free agency awkwardly, no matter how you feel strung along by him (and this is as understandable as is JT wanting to play for his childhood dream team), this debacle is squarely a result of the team failing to build a supreme product on this ice at the NHL and AHL levels. This builds culture and attraction for players, and the Leafs, as Brendan Shanahan put it today in the press conference to welcome JT, have this in abundance because they put a lot of resources behind it.

In the Charles Wang days, this is an issue for the Islanders. Since Malkin and Ledecky took over the team promising a world-class operation, it has been a slow and steady build to follow suit. Last month’s welcome regime change to Lou Lamoriello as and Barry Trotz as Head Coach is a late-arriving train, but at least its got diesel fuel.

Remember, before the Red Wings finally got their sparking new building, they played in a raggedy old rink – but no one cared because the on-ice product was so good. The Islanders have their mediocre culture for so long that everything else about the team gets more magnified. Surely, Josh Bailey didn’t think things would step back to this when he signed his extension last season, and I’d bet Andrew Ladd would go to any team that would absorb his big contract now. And now, a 20-year-old in Mat Barzal is what the team can hang their hopes on.

Losing Tavares — after he took so long to decide, after the team built no semblance of consistent success around him, and after the owners and GM let him dictate this course — needs to be a distant memory very soon if the Lamoriello Era is to result in a culture change from Us Vs. Them to Proactive High-Standard National Hockey League team.

I eagerly await Lou’s Plan B and I hope it’s a doozy. This fanbase has had enough.