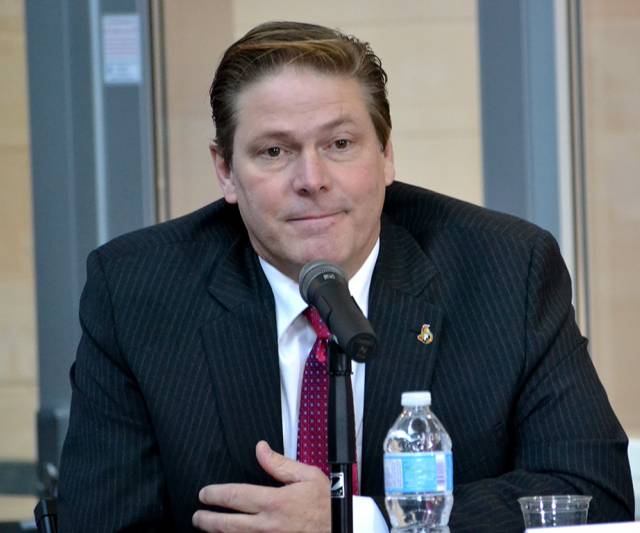 Based off recent precedent, it’s the kind of news that one would expect the Senators to release on a Friday at 6:00 pm, but with all of the Michael Cohen headlines dominating the news-cycle, it’s fitting that Randy Lee’s resignation arrived today.

The official press release was succinct:

The assistant general manager was arrested and charged with second-degree harassment on May 30th during the NHL Combine weekend in Buffalo. It was alleged that Lee rubbed the shoulders of and made lewd comments towards the 19-year old shuttle bus driver who was tasked with the responsibility of picking Lee up from a bar and returning him to the Westin Hotel.

When Lee’s attorney, Paul J. Cambria’s, filed a motion to dismiss the charges on the basis that rubbing shoulders did not constitute “assaultive conduct” on the level of a “strike, shove or kick,” it felt like only a matter of time before Lee was gone.

It should have happened a hell of a lot sooner.

It took the Senators two weeks following the initial arrest to suspend Lee and put his obligations with the Senators and with his role as general manager of the Belleville Senators on hold.

If there is any saving grace, it’s that Lee’s departure is welcomed.

As the general manager of the Senators’ AHL affiliate, the B-Sens floundered. In each of the past four seasons whether it was Binghamton or Belleville, the Senators missed the playoffs. The team compiled a 122-158-24 record while being outscored 830 to 1,031 during this span of games.

In consideration of the organization’s struggles, the mediocrity of the team’s minor league affiliates and how the events of the past eight months and reflections of former players have portrayed the Senators as a sideshow whose lack of structure and lowly culture starts the highest levels of the organization and trickles down.

By moving on from Lee, an employee who has been with the organization for 23 years, the Senators have a real opportunity to bring in an outsider who can offer fresh ideas and an understanding of what a small market team can do to work the margins and create traction for an organization that has spun its tires since its 2007 Stanley Cup Final appearance.

The official press release indicated that the search has already begun and in a league where there is only a limited number of front office openings, the Senators should be able to attract some really qualified individuals for the role. Perhaps most importantly, if the candidate can come in and prove themselves within the current framework, they would technically be one Pierre Dorion misstep away from a promotion.

The problem that the Senators may encounter in their search is that recent plights may be difficult for prospective candidates to overlook. Will someone want to join an organization whose owner is renowned for being one of the most difficult people to work for in the league ? With lingering uncertainty over Melnyk’s future as an NHL owner, there is also the question of whether someone would be willing to leave an organization for one where your own future could be in doubt should new ownership come into the picture and want to put their own people in place to manage the team.

Perhaps most importantly, the Senators’ roster situation is a bit of a mess.

As an indictment of the organization, none of the team’s best players appears willing to sign a long-term extension at the moment. With Matt Duchene, Mark Stone and Erik Karlsson all slated to become unrestricted free agents next summer, whomever comes in is going to be under a lot of duress to help Pierre Dorion and Eugene Melnyk navigate some troubling waters.

Now obviously there’s something to be said about having the opportunity to help the franchise turn things around for a beleaguered franchise and that is very, very true. The good news for the Senators is that there are some very good pieces in place. Despite the Colorado Avalanche owning the rights to the Senators’ 2019 first rounder, the Senators’ farm system was ranked relatively well in Corey Pronman’s organizational rankings over at The Athletic (note: paywall).

There are some reasons to like the Senators, but my only concern is that if the decision-makers at the top continue to remain in power, I have to wonder how much influence or impact a new hire can have on the front office.

Since Eugene Melnyk bought the team in 2003, he has essentially surrounded himself with yes-men who will tow the line and operate in the best interests of Eugene Melnyk.

John Muckler failed to land Gary Roberts at the 2007 NHL Trade Deadline at the owner’s behest and he was fired despite overseeing a team that represented the Eastern Conference in the 2007 Stanley Cup Final.

Melnyk fired Cyril Leeder because he preferred a magnate from Toronto, who had experience delivering massive sports venue property deals, to handle the LeBreton Flats portfolio.

It never mattered that Leeder was a well-respected local who also happened to be one of the organization’s founders. All that mattered was delivering on LeBreton to ensure that the organization’s future was near the downtown core creating more financial stability for the owner or the opportunity to leverage the deal and maximize the franchise value for a prospective sale.

The owner can hire some of the brightest upstarts in the game to help run his club, but until the organization brings about systemic change and establishes a sustainable long-term vision for competitiveness in which Melnyk entrusts his underlyings do their jobs without constant micromanagement and meddling, I can’t help but wonder how much positive influence or change a new assistant general manager can bring about.

Fight of the Day: Justin Gaethje vs. Luis Palomino

In the midst of the Coronavirus crisis, a lot of sporting events are trying to begin their campaign. In this Bundesliga will become the for (…)

Premier League match is on, Espanyol will face Barcelona in the EPL 2020, We bring you exclusive coverage of the match. Stadio Olimpico, (…)

EPL is back in action with Liverpool taking on Brighton at the Etihad Stadium in Manchester. The city doesn’t have much to play for in the (…)