Tonight the Coyotes kick off the season in Dallas. 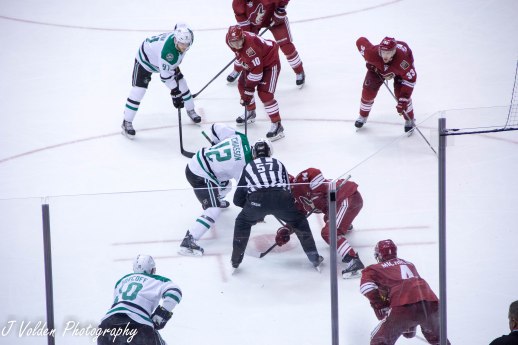 They played seven pre-season games. There was both good and bad, which is why we can’t put much stock in how the pre-season goes. The Coyotes started the pre-season in Las Vegas with a 7-2 loss to the Golden Knights. Both Coyotes goals came from defensemen named Jordan (Oesterle and Gross). Kuemper allowed in six goals on 27 shots.

Next, the Coyotes played split-squad games against the Kings. This was the first time Coyotes fans got to see the action on the ice. The Coyotes won both the game in Glendale and LA. The final scores were Coyotes 4 (both games) and Kings 2 (Glendale) and 3 (LA). The home game saw Galchenyuk score twice. Hinostroza also put up a goal while OEL had three assists. It was a fun game to watch and gave glimpses of what fans can expect this season.

The Ducks came to town and the Coyotes ran them out with six goals. AHL player Kevin Klima was one assist away from a Gordie Howe hattrick. Goals came from several players with OEL adding two assists this game. It was another fun game for the fans. Hopefully, these Coyotes stick around when it counts.

The road does not seem to be the Coyotes friend this pre-season. After traveling to Anaheim the Coyotes lost 4 to 2. Kuemper was in net. After Anaheim, the Coyotes headed north to Edmonton for an overtime loss. Keller had his first pre-season goal but it was no match for McDavid’s two goals, one being the overtime winner.

The Coyotes played their final pre-season game in Kelowna against the Canucks. The team arrived a couple days before game day to do some team bonding at Myra Canyon Adventure Park. It looks like a fun activity. Check out some photos on the Coyotes twitter!

Kuemper has finally seemed to find his rhythm with a final pre-season win over the Canucks. Four different Coyotes contributed to goals, with Grabner getting an empty-netter to bring the final score to 4-1.

In the preseason the Coyotes scored 24 goals over seven games. Ten of the goals were powerplay goals. After suffering through years of powerless plays, have the Coyotes finally cracked the code? Let’s hope this continues into the season.