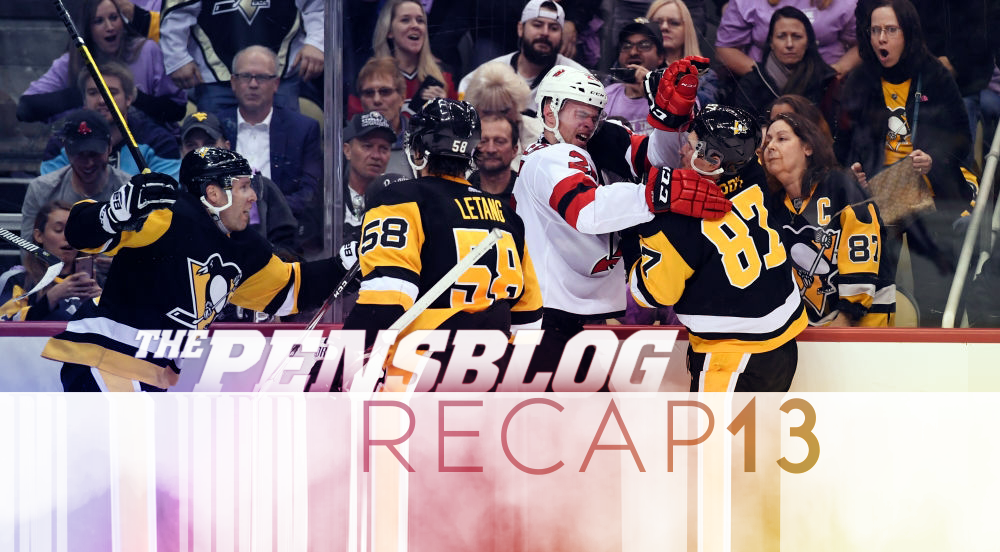 Looking to bounce back from their lackluster performance against the Leafs, the big solution was:

Ready to dance with the Devils. pic.twitter.com/ltDZrl5RBO

Johnson against the top line of Taylor Hall. No way this could go wrong!

Anyway, let’s have a chat about all of this. Johnson is not good. Every metric, advanced or otherwise says so, but they went out and signed him. They have to find a place for him, especially with that contract. It isn’t right, but it’s reality. Sometimes reality bites ass. You spend that kind of money, you don’t toss it out the window less than a quarter into the season.

The Devils came out quick, but on the next shift, the Malkin line went to work. A solid shift was all for not. Just a minute or so later, Murr would catch an edge in the crease and a seemingly harmless shot from Will Butcher found its way in. 1-0 Devils.

The littlest of areas to work with, but @WillButcher4 can find a way. #NJDvsPIT pic.twitter.com/b1tw869CNe

The very next shift, Taylor Hall would collide with Letang on some incidental contact…his response was not great! He’d retaliate and sit for cross-checking. Pengs were under siege during most of the kill (Rust did hit the post on a shorthanded 2-on-1), but came out unscathed.

The Devils would control the next five or so minutes, but with just over 10 minutes remaining, noted offensive defenseman Jamie Oleksiak would step into a one-timer and we had ourselves a new game. One all.

Was that a @jamieoleksiak shot or a laser beam?

That goal should nudge Jamie Oleksiak back into the top 20 in scoring by a defenseman. Now just two off the NHL lead among blueliners. Incredible.

Three minutes later, despite good pressure by the Penguins, the Devils would reclaim their lead. Love Benjoy would fire a shot from point and Brian Boyle would deflect it past Murr. Not much you can do there, that’s how you draw that up. 2-1 Devils.

The Penguins would get a power play chance late in the period. After about 30 seconds of good zone time, a strange bounce would spring Andy Greene in on a shorthanded breakaway, but Stone Cold Matt Murray was there to bail out the Pens.

No dice on the man advantage. We’d head to intermission with the Devils up 2-1.

The opening minute of the period was not pretty, but it was pretty lucky, for the Guins. A scramble in front of Murray would see a rebound pop out to Vatanen, but stripes lost sight of the puck and blew the play dead before he could bury it. Saved by the whistle.

So, when you’ve been struggling (pick your team) what’s the cure? Open it up. For about a full minute both the Pens and Devils would go back-and-forth. A Cullen chance led to a JS Dea breakaway. Kinkaid and Murr would both stand tall.

Three breakaway saves for Murr. Penguins have been absolutely putrid when it comes to preventing breakaways and odd-man rushes.

No rest for the wicked – after Murr stood up, a Maatta hooking penalty gave the Devils the advantage and it was Boyle again. 3-1 Devils.

Unreal tip. You just gotta give it to a guy sometimes.

Then with 10:16 remaining, it was the Pens turn to have the man advantage. Anderson to the box for slashing. Nothing doing. Moments like that, you need your power play to step up. They didn’t.

The rest of the period was very rope-a-dope, low event hockey. Outside of a scrum in front of Kinkaid…not a lot happened.

That is until just under a minute, all hell broke loose. It all started with a battle between Hornqvist and Vatanen. Mueller threw a punch at Sid, Sid punched back. Letang squared up with Miles Wood. No actual fights, but after a snoozefest of a second period, the Pens suddenly showed a pulse.

The Pens would find themselves shorthanded with 51.7 seconds left. Boyle would complete the hat trick. Happened on Hockey Fights Cancer Night, good for him.

The Smith replaced Murr. They scored on the first shot. Turn the lights out.

Off to DC on Wednesday to take on the champs. Let’s see what you’re made of.