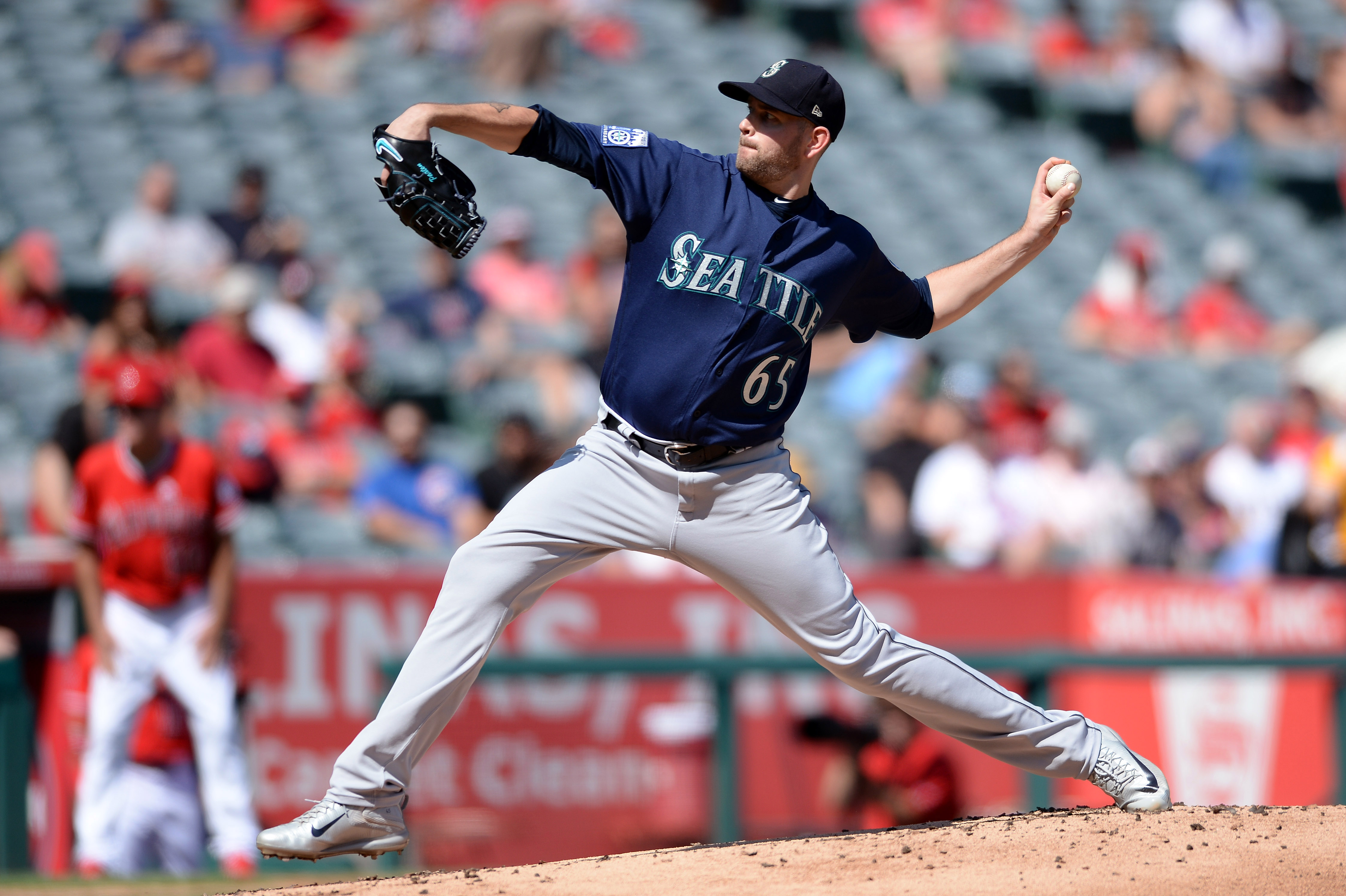 Jerry DiPoto made headlines this week, saying that he would like to have a “re-imagining” of the Mariners roster. That was his phrasing after media outlets began reporting that the Mariners could be hosting a fire sale. With most teams, the reasonable expectation would be to see a few high priced players moved, similar to the White Sox “sell off” from a few years ago, which really just amounted to a haul of prospects in return for Adam Eaton, Chris Sale, and (later) Jose Quintana.

However, the idea of wholesale change with the Mariners is a little more intriguing than with a typical team, because there is a distinct possibility that they make a flurry of moves.

An MLB.com article, published January 12, 2018, provides a visual of how many trades DiPoto has made since becoming the GM in September 2015, compared to the rest of the league. At the time of publishing, he had made 62 trades. The next closest team was the Atlanta Braves (who were wheeling and dealing as part of their rebuild strategy) with 46. The Cardinals made 16 trades during that same time, meaning the Braves + the Cardinals trade totals were equal to that of the Mariners. He made 5 more trades in that time than the Cardinals, Reds, Giants, and Rockies had combined.

He added 9 more through the course of 2018, capped by last night’s Mike Zunino/Mallex Smith trade.

Trader Jerry is always open for business, so maybe the Cardinals need to do some browsing.

The teams have matched up recently. They made 2 trades in 2017, the first bringing in Tyler O’Neill in exchange for Marco Gonzales, and the second sending Mike Leake out west in exchange for salary relief and minor leaguer Rayder Ascanio. They matched up again in 2018 when Sam Tuivailala was traded for minor-leaguer Seth Elledge.

Now, as I run through this, I’m going to stop short of building any trade packages.

Let me start by excluding a few notable names. Felix Hernandez is a shell of his former-Cy Young-Self. While Seattle surely wants to move some of the $27M owed in the final year of his contract, it doesn’t make sense for the Cardinals. Robinson Cano is under contract through 2023 at $24M/yr and while his LH bat makes sense on the surface, taking on 5 years of a high salary for a now 36-year old 2B just doesn’t make sense.

Edwin Diaz would be a great acquisition, but is super young and affordable. The re-imagining phrases suggests that the Mariners are more interested in shedding salary than just an all-out tank and rebuild where they move all talent. I don’t think they will move Diaz.

He is coming off of a season in-which he struggles with a toe injury. I don’t watch the Mariners closely, so I’m not sure if that was the reason for his offensive struggles, but his numbers suffered. He has a decent career strikeout rate of just 17.1%, yet struck out 21.9% of the time in 2018. He also walked less.

Still, he managed to top 20 HR’s for the 7th straight year in 2018 and is just a year removed from a 3.6 fWAR season and two years removed from being a 5 win player. He has twice received down ballot votes for MVP.

Defensively, he won a Gold Glove in 2014. His 5.1 UZR/150 ranked 6th among the 19 qualified 3B in 2018. His 8.9 Defensive Runs Above Average ranked 2nd behind gold glover and defensive stud Matt Chapman. So he brings quite a bit of value in the field.

And he is durable, playing 154 games or more in each of the last 7 years. As a LH bat with power, he fits that part of the Cardinals wish list. At 31 years old, he would be a monetary gamble, but he could very easily be a bounce-back candidate.

Segura is a solid all-around player. He provides a little pop in his bat, a stolen base element, and a low strikeout rate (career 13.7%). As a 3.8 fWAR player, he would have ranked 2nd on the 2018 Cardinals. He is certainly a caliber of player that they could use. With $14.85M owed to him annually for the next 4 years, he is a prime candidate for the Mariners to move.

The questions I would have revolve around the positional change of Paul DeJong. I have no doubt DeJong will be a good defensive 3B, but his big power/low on-base hitting profile holds more value as a plus defensive SS than as a 3B. Many two-true-outcome players can play a reasonable 3B, not a lot can play SS to the level of +14 DRS and a 9.3 UZR/150. For comparison, Segura was a +5 DRS, 1.1 UZR/150 SS in 2018. He is a career +4 DRS and has had a negative UZR/150 in all but 2 of his major league seasons. He simply isn’t as good defensively at SS. So you downgrade at SS and neutralize a huge part of DeJong’s value by putting him at 3B.

Segura would be a nice player to have, but he also isn’t a perfect fit.

There was a lot of smoke around Colome and the Cardinals this time last year, and while it seems that their interest was actually geared towards Chris Archer in talks with the Rays, Colome would be an option to explore for 2019.

He is not a dominant reliever, don’t confuse him for that. What he is, though, is a durable and consistent reliever with late inning experience. He posted a solid 3.04 ERA and a 3.44 FIP in 2018, in-line with his career norms. He also had a 25.5 K% and 7.5 BB%, both figures that would have looked very good in the Cardinals 2018 bullpen.

He is 2nd year arbitration eligible this season and MLBTradeRumors projects his salary at about $7M, which is just expensive enough that the Mariners may want to save a little cash and get a player in return.. For the Cardinals, he would give them a nice 2-year window of control and provide a stable fall back option to Jordan Hicks for the closer’s role, without having to spend north of $10M for an older free agent such as David Robertson.

The last Mariner on my list is the dream acquisition. James Paxton has quietly been one the best LH starting pitchers in baseball over the last few seasons.

Among 35 LHP’s with 300 innings pitched since the start of 2016, Paxton’s FIP, xFIP, and BB% rank behind only Sale and Kershaw. His 28.2 K% is tied for 4th with Kershaw. His opponent OBP, wOBA, and SLG ranks 5th, 6th, and 7th, respectively. He has a better ERA than Dallas Keuchel and Patrick Corbin, the LH prizes of free agency this winter.

You get what I’m saying. This isn’t some Jaime Garcia or even Danny Duffy lefty. He is one of the best around.

With the 5th spot in the Cardinals 2019 rotation currently looking like a competition between Wainwright and a cast of young pitchers, there is room for him at the top. A rotation of Paxton, Flaherty, Mikolas, Martinez, and Wacha would potentially be the best in baseball.

Now, why would the Mariner’s trade him? They may not. Part of their strategy may be to clear some future salaries from Cano, Seager, Segura and others in order to lock Paxton down with an extension.

However, it would be wise for the Cardinals to aggressively target a stud pitcher with 2 years of arbitration eligibility remaining.

May 8, 2018; Toronto, Ontario, CAN; Seattle Mariners starting pitcher James Paxton (65) celebrates after pitching a no hitter at the end of the ninth inning during a game against the Toronto Blue Jays at Rogers Centre. Mandatory Credit: Nick Turchiaro-USA TODAY Sports

BONUS: He would complete a Canadian trio for the Cardinals, alongside O’Neill and Stubby Clapp.

Cardinals That Makes Sense for Seattle

I won’t go as in depth here.

I will start with Jose Martinez. The Mariners have had one of the best DH’s in baseball for the last 4 years with Nelson Cruz. However, with this newfound desire to cut payroll and Cruz as a free agent, it’s unlikely that they would pay premium dollars to bring back the 38-year old. This leaves a clear opening for a DH in Seattle. Martinez, with 4 years of team/cost control remaining, would be the perfect fit as a productive, yet affordable, DH for a team that is regrouping.

The next player that would make sense is Carson Kelly. Kelly maintains a reputation as a very good defensive catching prospect. With regular at-bats, there is a reasonable expectation that he can hit enough to stick. That won’t happen in St. Louis, not for a couple years. For Seattle, they just traded a very good defensive catcher in Mike Zunino, thus opening that position on their team. Kelly, MLB ready with zero left to prove at AAA, would make perfect sense as catcher to grow with what is sure to become a young pitching staff.

The Cardinals can always offer an OF, though don’t expect the Mariners to take on Fowler’s salary, or for Fowler to accept a trade to a rebuilding club. The Mariners just reacquired Mallex Smith on Wednesday, a player they had traded away a few years earlier. Perhaps they are interesting in reacquiring O’Neill. Don’t put it past DiPoto. Then, of course, the Cardinals have high-level OF’s in Adolis Garcia, Randy Arozarena, and Justin Williams.

Finally, every team wants pitching. The Cardinals can offer up at least 4 potential MLB starting pitchers in Gant, Gomber, Poncedeleon, and Hudson. Teams can never have enough pitching depth, but this is also an area of strength from which the Cardinals could deal and not take a significant hit. Also keep in mind that the Mariners just hired Paul Davis as there pitching coach. Davis has been working in the Cardinals system for the last 5 years and would have familiarity with, and perhaps and affinity towards, most of the Cardinals young pitchers.

Without building packages and proposing trades, I’ll just say that they Cardinals offer would start with Jose Martinez. They can then add players to the package depending on which player (or players) from Seattle they are targeting. A straight salary dump trade for Seager may only take Martinez, wheras Paxton would require the greatest return of the players listed.

Regardless, this is certainly an avenue that they Cardinals can, and likely will, explore as they feel out ways to turn this into a “division leading roster.”