Forget the Trade Rumors, the Indians have a Future Ace in McKenzie 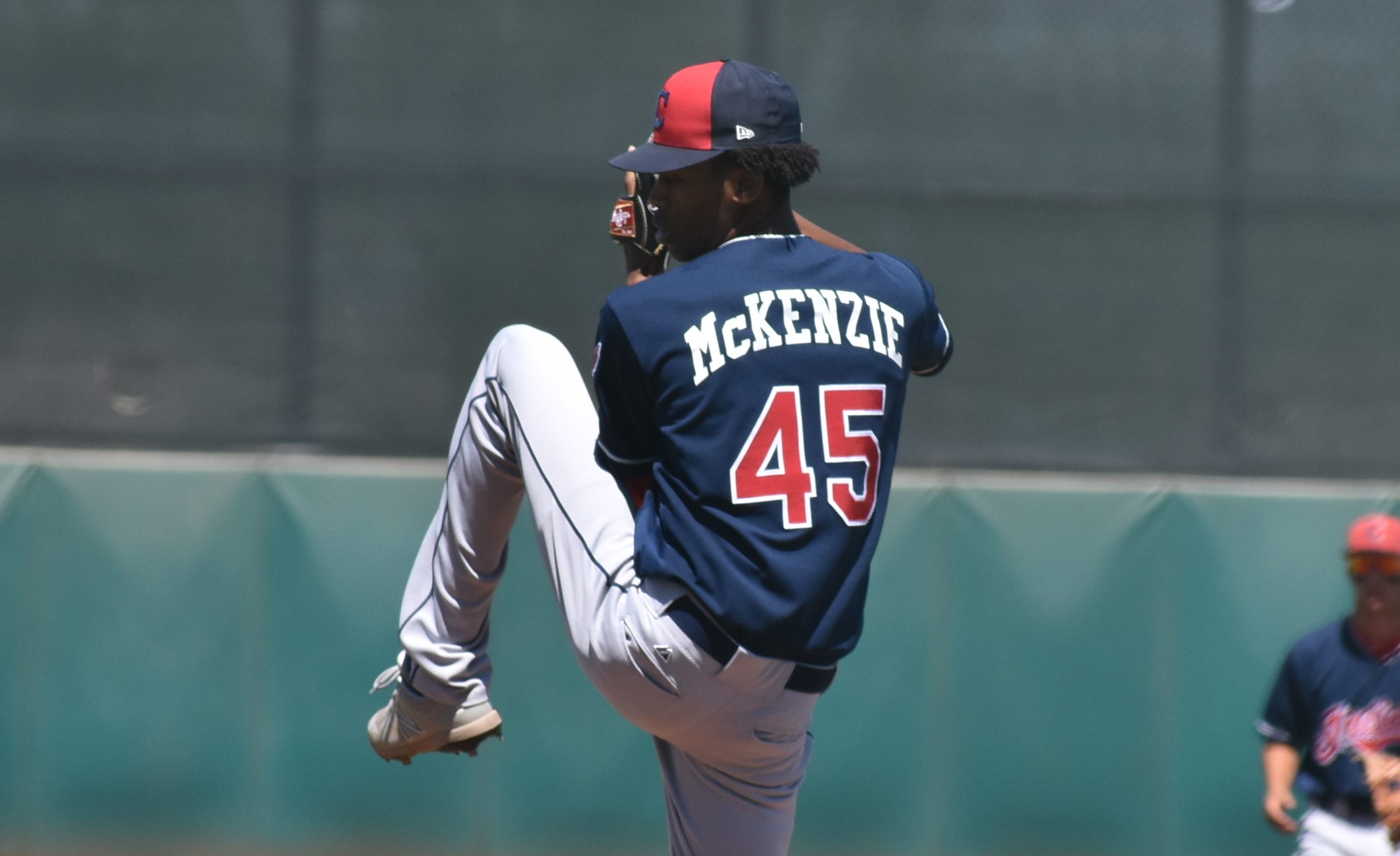 Forget the Trade Rumors, the Indians have a Future Ace in McKenzie

Originally taken as a 17 year old competitive balance pick to end the first round of the 2015 draft, McKenzie quickly began to prove himself in the Arizona League. While he was used carefully, he struck out 17 in 12 innings while allowing just four hits and three walks across four appearances. He continued to extend his innings with similar results through 2016 extended spring training before heading to Mahoning Valley. While this was a slow start for such an elite prospect, things took off quickly from there.

At just 19 years old in 2017, McKenzie started the season in high A Lynchburg. Drafted at 6’5″ and 160 pounds, according to the official MiLB numbers McKenzie put on just five pounds from the time he was 17 until he was 21 (these numbers are notoriously suspect, but in this case it is believable), something that has caused concern for some regarding durability. Irrelevant of those concerns, McKenzie pitched a career high 143 innings for the Hillcats with a 3.46 ERA, 2.8 BB/9 and 11.7 K/9. While he allowed nearly a home run per nine, he allowed fewer than seven hits per nine leading to 13.33% of his hits allowed leaving the ballpark. While that number seems incredibly high, this has been the trend all across baseball and even Corey Kluber allowed 13.96% of his hits for home runs this year (11.4% over his whole career).

Following his first full season (he pitched just 95.1 official innings over his first two years although he also threw a full slate in extended spring in 2016), McKenzie had his first bout with injury. Before the season even started he felt some pain in his right forearm and was shut down during spring training. He missed all of March and April with the injury, but began his comeback in May, back in extended spring training again. After a brief rehab stint, he shot straight to Akron on June 6th and quickly became the staff ace.

After throwing five one hit, shut out innings in his debut, McKenzie struggled a bit before going on a roll from July 3rd through the end of the season, pitching 64.2 innings and allowing just 15 earned runs for a 2.09 ERA to go with 65 strike outs and a .177 average against (.219 BABIP). He was back to his normal, dominant self, but was ultimately shut down when the Rubberducks went into the play-offs due to general soreness.

This injury was not considered serious at the time, but there was no reason to push McKenzie after such a successful return from the DL. Overall, he had a 2.68 ERA in 90.2 IP with a 2.8 BB/9 and 8.6 K/9. While the strike outs look low for the whole season, his increased rate over his last 2/3rds of the season match more closely with his 10.8 career K/9.

What makes McKenzie so dominant is not necessarily his speed, but the fact that he can throw in the mid 90’s with almost pin point control. While this hasn’t lead to elite walk levels, it is evident in his ability to limit hard contact. The fact that he allows a large number of home runs per hit (it was 12.69% in 2018) should reflect more on the fact that he is allowing an extremely low amount of hits more than that he is allowing a lot of home runs. While we don’t normally look at average against as a reliable predictive stat, McKenzie has been incredibly consistent in keeping runners off the bases since he began his professional career.

I’ve included batting average on balls in play in the chart above to show that, while the league average is generally around .300 for BABIP, McKenzie has always been significantly below that number. It isn’t outrageous to believe he could sustain a BABIP under .280 as many pitchers, including the Indians Kluber and Mike Clevinger, have done so over at least 300 innings since 2015 with Max Scherzer leading the way at .259. The only MLB pitchers to have a BABIP under .280 while also striking out at least 10 batters per nine since 2015 are Scherzer, Kluber, Clayton Kershaw, Justin Verlander and Rich Hill.

Obviously, striking out hitters in AA is a lot different from striking out Major Leaguers, but McKenzie is still only 21 years old and was nearly 4.5 years younger than the average player in AA during the 2018 season. It seems reasonable that by 23 he’ll be able to translate these numbers to the Major Leagues fairly consistently.

It will depend on both McKenzie’s health and any off-season deals the Indians make, but with four of Columbus’ primary starting pitchers hitting minor league free agency (Adam Wilk, Stephen Fife, Mitch Talbot and Ryan Merritt) and Shane Bieber expected to be in the MLB rotation, only Adam Plutko, Shao-Ching Chiang and Michael Peoples remain for the 2019 Clippers starting rotation. Looking at the 2018 Rubberducks rotation, no pitcher deserves a promotion more than McKenzie and he would immediately become the top pitcher in AAA for the Indians. While the Indians could go to Plutko, who will likely burn his final MiLB option, or Chiang, who can become a free agent at the end of 2019, for a spot start, McKenzie is the best option for a long term role much like Bieber was in 2018.

The number one thing that could hold McKenzie back at this point is the service time game. With five truly elite starters (among pitchers with at least 100 IP, four were in the top 14 in all of baseball in fWAR while Bieber came in 31st despite throwing just 110 IP), the Indians have little use for McKenzie until 2021 and most likely will not want to throw away two seasons worth of service time by using him as a reliever. It is very possible that his nearness to the Majors is one of the reasons they have stated both Kluber and Carlos Carrasco are potentially available through trade. Both are slated to become free agents after 2020 and if McKenzie were able to work into the rotation either next year or in 2020, he could potentially be the ace by 2021.

Another option has been brought up involving McKenzie because his fastball/change combo is so good. While the Indians have many potential closers in their farm system, most are at least a few years away from the big leagues. McKenzie, on the other hand, could be an elite reliever out of the gate and could do a lot to cover for the free agency of Cody Allen and Andrew Miller. This would likely be a short term situation, similar to how Chris Sale broke into the league, but it would be a way to get him on the team and facing MLB hitters earlier than otherwise possible. McKenzie already has a curve that is rated 60/60 by MLB Pipeline and 55/60 by Fangraphs. Imagine if he were able to work with two of the best in baseball in Trevor Bauer and Kluber for two seasons instead of one.