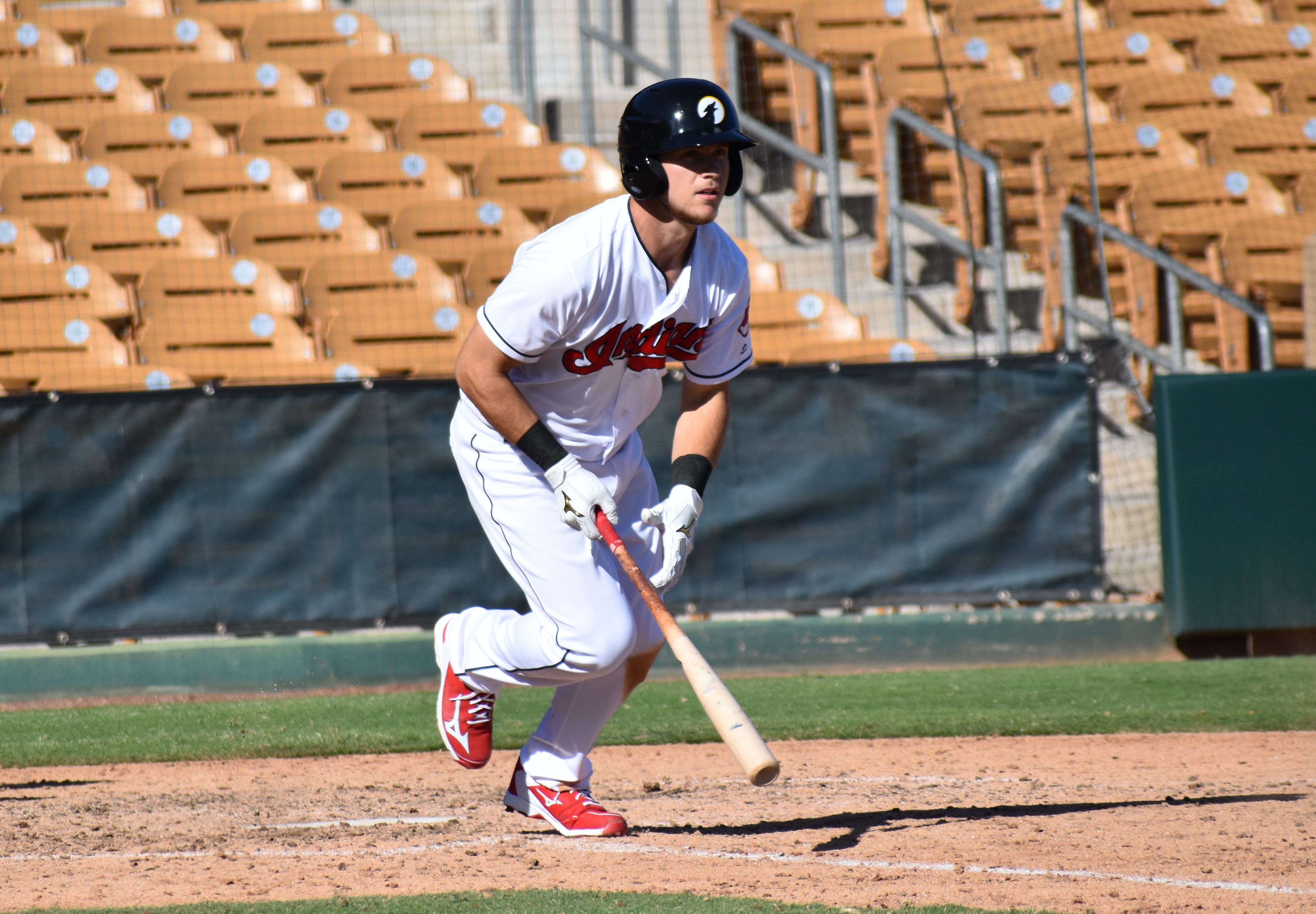 The Indians front office must have had the 2018 off-season marked as a critical time for many years at this point as it has been well known that 2018 would be the final season in Cleveland for quite a few mainstays including Michael Brantley, Lonnie Chisenhall, Cody Allen and Andrew Miller. Focusing specifically on the outfield, the patches put on to survive the 2018 season are also falling off as Rajai Davis and Melky Cabrera are also set for free agency. With Bradley Zimmer out at least through half of 2019, this leaves an outfield of Brandon Guyer (whose option was used for 2019, but will be a free agent at the end of the season), Greg Allen and a lot of questions.

One answer to these questions could be Connor Marabell, who just wrapped up his 2018 season by participating in the Arizona Fall League. Coming in at  #18 in Burning River Baseball’s recent Indians minor league prospect rankings and second among corner outfielders (behind George Valera), Marabell brings a combination of a high floor and potentially high ceiling that is completely absent from the rest of the Indians outfield prospects.

While the Indians have plenty of high ceiling outfield prospects, they are generally clumped together in the low minor leagues and could be years away. In addition, those with the greatest promise, like Will Benson and Oscar Gonzalez, have the biggest flaws. They could definitely eventually become Major Leaguers, but there is still a long road to take before that happens.

At the same time, there isn’t much inspiration to be found at the top end of the Indians farm system. If the Indians were interested in Mike Papi they would have used him in 2018 and it’s unlikely the Cardinals would have given up Oscar Mercado if they had any real hope for him (fool me once [James Ramsey]…fool me twice [Rob Kaminsky]…fool me three times….). Andrew Calica, Ka’ai Tom and Tyler Krieger could all be interesting, but are at least two years away and all have significant question marks as well. When looking internally to replace two corner outfielders, there is really only one minor league option and that is Marabell.

Originally drafted in the 25th round back in 2015, the 21 year old college pick went straight to Mahoning Valley where he had a boring enough season to become immediately labeled as just another late round pick that would amount to nothing. Luckily for Burning River Baseball, we had a young writer named Caitlin Boron covering the Scrappers that season who came back with tails of this athletic and underrated right fielder. Based on these reports, he was ranked the 51st best prospect in 2015 at Burning River, despite the stat sheet.

In his first full season, Marabell proved anyone who thought little of him wrong. With 45 doubles, a .298/.346/.461 line and plus corner outfield defense across both Lake County and Lynchburg, he certainly made a name for himself. Possibly most importantly, unlike nearly every single other Indians outfield prospect, Marabell didn’t strike out at an atrocious rate. In fact, he k’d in just 13% of plate appearances in 2016 (compared to Benson’s 30% this year at the same level).

That 13% mark is also his career mark in over 1,700 plate appearances. His K-rate did rise to 18% during the Arizona Fall League and will likely go up more once he hits the big leagues, but it would likely still be in an elite range. In 2018, only 13 qualified MLB players had a K% lower than 13% (including both Michael Brantley at #2 with a 9.5% and Jose Ramirez). In a league where the average hitter now strikes out 22% of the time, someone like Marabell could provide a distinct benefit.

Marabell’s real value, however, comes in his unique power. As could be assumed by his low strike out rate, he is not a high launch angle, all or nothing hitter. Instead, he’s a slasher who pounds line drives to the gaps. While this doesn’t amass lofty home run totals, it does lead to a massive amount of doubles, starting off with his 45 in 2016, then 18 more in 2017 and 31 in 2018. Even in the short AFL season he managed to lead his team with six doubles despite missing about a week in the middle with a hand injury.

One thing that could hold Marabell back is his speed, although compared to the Indians corner outfielders the last few seasons, he could look like Billy Hamilton. He was used in center field during 82 games in his minor league career (mostly in Lynchburg between 2016 and 2017), but was significantly less effective there than in his primary position of right field. In 2018 between Akron and Columbus, he was almost exclusively a corner outfielder.

When used properly, Marabell has decent instincts that allow him to get to balls despite his lack of speed, although he is still far from a high flyer. His arm is above average, but not elite. It is strong enough that on multiple occasions this fall runners have chosen not to attempt to advance in normal situations to avoid the risk and on multiple other occasions he has been able to catch overly aggressive base runners. In his career, he has 33 outfield assists (about one every 100 innings) with 22 coming out of right field.

Marabell and Chang warm up prior to a 2018 Glendale Desert Dogs game at Camelback Ranch. – Joseph Coblitz, BurningRiverBaseball

The Indians use of Marabell next season could go a long way in showing the direction of the front office. In recent seasons, they have chosen to sign cheap veterans to fill in holes until high draft picks come of age, but this situation provides them with a unique opportunity. With Yu Chang and Yandy Diaz breaking down the door for a starting infield job, there is a good chance that Jason Kipnis will be moved to the outfield permanently. With the Indians looking to slash the budget, this still leaves just Guyer for right field. Guyer is acceptable against left handed pitching (120 wRC+), but nearly useless against right handers (34 wRC+).

At the same time, Marabell had a .275/.314/.468 line against right handers and a .376/.317/.388 line against lefties last year. He shouldn’t need a platoon partner at all, but since Terry Francona is very hesitant to trust rookies, a partnership of Guyer and Marabell out of the gate to replace Chisenhall could be very effective.

With just over a month of experience in AAA, it’s possible that Marabell’s experience in the Arizona Fall League could be enough to push him straight into the big leagues in 2019. If he struggles then, the Indians always have Zimmer coming back in June or July, at which point he could return to AAA if necessary.

While he is only ranked 18th this season, Marabell and Chang remain the Indians two most likely prospects to debut in 2019 based on team construction and talent. If he does, it would be a great triumph for the 25th round pick who has consistently flown under the radar all the way to the big leagues.