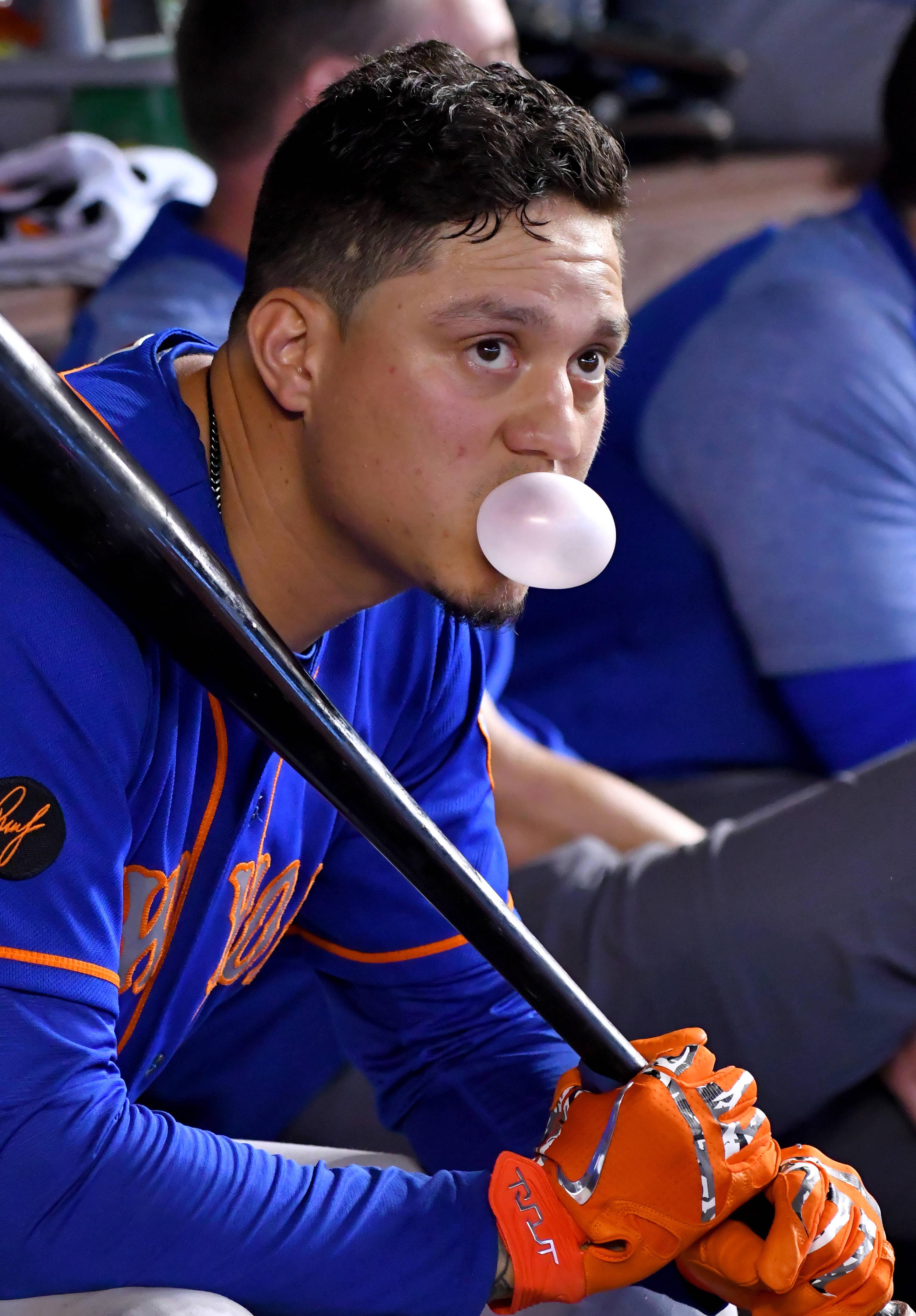 Players who aren’t offered a typically-cheap contract in their pre-arbitration or arbitration years usually aren’t franchise-altering, with the exception of David Ortiz. That doesn’t mean those players are bad though, especially in an age where payroll space is valued so highly by teams. You may not find treasure among the top non-tendered free agents, but you can certainly find someone to fill an important role on your roster.

Even after being acquired for a legitimate (although unspectacular) prospect in August, it’s not much of a surprise to see Bour non-tendered, as he simply didn’t have any fit with the Phillies. No matter how good his offensive numbers are, the fact that he is a platoon first-base-only player hurts his stock, especially with teams that already have a surplus for 1st basemen like Philadelphia. Despite being limited, the appeal to Bour for teams with holes at 1B or DH does not come without reason. In the last 3 seasons, among players with 700+ PA as a 1st baseman against right-handed pitchers, Bour is among the best in the game. With his plus plate discipline and power, Bour makes for a threat at the plate and defensive metrics generally grade him around average with the glove. He isn’t the long-term solution anywhere, but he is projected for a 115 wRC+ by Steamer in 2019, which is an upgrade over plenty of teams, especially if he comes at a cheap price.

Minnesota is one of those teams that could clearly use an upgrade at 1B or DH. They just recently acquired CJ Cron for cheap to play 1st base, and although he had a more productive 2018 than Justin Bour, they still have the DH slot wide open. Jake Cave is currently projected to take swings against right-handed pitchers, but his plate discipline showed to be very bad in 2018, which makes it hard to believe he can be very productive. He benefitted largely from a .363 BABIP as well last season, and his reputation as a prospect didn’t suggest he would be enough of a slugger to be a designated hitter. Tyler Austin has never performed well enough to be considered the starter there either. They could look for more luxurious upgrades with a free agent like Nelson Cruz, but Bour represents a younger option for a younger team.

Known as the player that was not traded for Carlos Gomez, Wilmer Flores quickly became a fan favorite in New York (a lot of walk-off hits helps as well). Despite being an above-average hitter in the past 3 seasons with defensive versatility, the new Mets’ GM decided it was time to move on. His blend of a minuscule Whiff% and a solid ISO allowed him to make noise with the Mets in recent seasons. Despite his bat’s moderate success and defensive versatility, his stock is on the way down. In 2018, Flores played a lot more 1st base than other infield spots. His bat also struggled more in 2018 compared to past seasons, as he only produced a .303 xwOBA and his power numbers took a large dip in the 2nd half of 2018. Additionally, late last season Flores was diagnosed with early-onset arthritis in both of his knees, which will likely hinder his athleticism for the rest of his baseball career.

Despite the warning signs of a decline, producing a 0.5 fWAR or better in each of the last 5 seasons should be good enough for a shot with another team. He likely will only be a bench player for wherever he goes, and I believe the Nationals are in big need of someone off the bench who can play on the right side of the infield. Flores won’t have to play 3B or SS much in Washington, but with the oft-injured and possibly declining Howie Kendrick and Wilmer Difo currently sharing the playing time at 2nd base, as well as the older Ryan Zimmerman at 1st base, the Nationals should surely invest in a plan B. Although it was reported that the Nationals would not prioritize an upgrade there, Flores could come cheaper than players they have been linked to like Josh Harrison.

Avisail Garcia is one of the more surprising names to not be tendered a contract, especially after there were rumors of teams being interested in trading for him. Steamer projects Garcia to be worth 1.2 fWAR in 122 games, which is pretty solid, even if it wasn’t worth his projected contract through arbitration. Garcia took a step down from his All-Star season in 2017, although that was partially due to a low BABIP and underperforming his xwOBA, both of which were mostly affecting him in the 2nd half (although he bounced back in September). Although he hasn’t played Center Field in a game in a half-decade, Garcia has shown a top sprint speed and has been worth +3 runs with his arm throughout his right field career. Not only could Garcia provide decent value without many improvements, but there is also still hope that he breaks out and repeats his 2017 campaign, especially considering he has top-tier athleticism in multiple facets of the game.

One of those teams with reported interest in Garcia in a trade is the Astros. After losing Marwin Gonzalez to free agency, they are reportedly looking for an upgrade in the outfield. Although Garcia would not be able to match the performance of free agents like AJ Pollock, he could fit in as a 4th outfielder for the AL West favorites. Josh Reddick is the starting right fielder for Houston now, but he took a dip in performance in 2018, and historically struggles against left-handed pitchers, so Garcia’s history of being better against lefties and righties would fit well in Houston.

Hamilton is definitely one of the most exciting players to watch, but after yet another terrible season at the plate, it’s becoming even more clear that he just won’t cut it as a full-time starter anymore. 3 of the last 4 seasons have ended with a wRC+ under 70, and this season he had the lowest Hard Hit % among qualifiers, and by a whopping 4.2% as well. At this point in his career, it’s becoming clear that Hamilton holds no value at the plate, but the question becomes what is the correct way to use a player who cannot hit but is elite in the field and on the bases. Hamilton has been the 2nd most valuable defensive outfielder by Outs Above Average since 2016 and has had the highest net baserunning gain in runs in the past 5 seasons despite not being on base often. There have been some interesting propositions on the correct way to utilize his skills. He may not last forever, as players who rely on their speed typically don’t age too gracefully, but for now, he can provide tons of value as a defensive substitute or pinch runner, even before rosters expand.

Ultimately I think the team that signs Hamilton will be the team that creatively comes up with a plan to use him differently than any other team before. The Indians may not have a plan to utilize him differently so they may not aggressively pursue him, but they have a serious need in the outfield and seemingly aren’t willing to spend a ton of cash to solve it. Terry Francona used pinch runners and called for a steal attempt more often than the average manager in 2018, which could lead you to believe that Hamilton will fill a role the Indians are looking for. Their current outfield employs Leonys Martin and Greg Allen, other defensive and baserunning oriented players, but they aren’t as elite at those skills as Billy Hamilton. I could additionally see the Rockies pursuing Hamilton to get an elite center fielder in their spacious outfield.

McCann struggled mightily at the plate in 2018. He had a wRC+ of 67 in the 1st half, and it dropped to a horrible 43 in the 2nd half. He’s as bad as a hitter you will see in a starting spot, but there’s a reason he’s played over 100 games in each of the last 4 seasons. Jeff Mathis is projected by Steamer to be 14% worse at the plate than McCann, but he recently just signed a multi-year contract because of his defense.

2018 catchers by defensive runs above average:

Rays just got one of the league’s best defenders.

McCann is one of the better catchers in the MLB at controlling the run game, and that helps his case for a Major League Contract. On the other side of things, McCann has been below average in terms of framing and blocking metrics. Baseball Prospectus valued McCann at below replacement level overall in both of the past 2 seasons. There is a strong argument to be made against signing McCann, even if you had a major hole at catcher, but with the state of catchers headed into next season, I find it hard that he doesn’t find a team.

After trading away an offensive first catcher in Omar Narvaez, the White Sox are currently situated with a tandem of Welington Castillo and Seby Zavala, who couldn’t hit much in AAA last season. Castillo is a bat-first catcher, and I figure Chicago will be on the lookout for a glove-first catcher to back him up. There are plenty of useful free agent catchers already, but since it appears the White Sox are preparing for Zack Collins to be the future behind the dish, I do not imagine they spend a ton. The White Sox allowed the 3rd most stolen bases of any team in 2018, and McCann would be able to bring that down a ton just by himself.