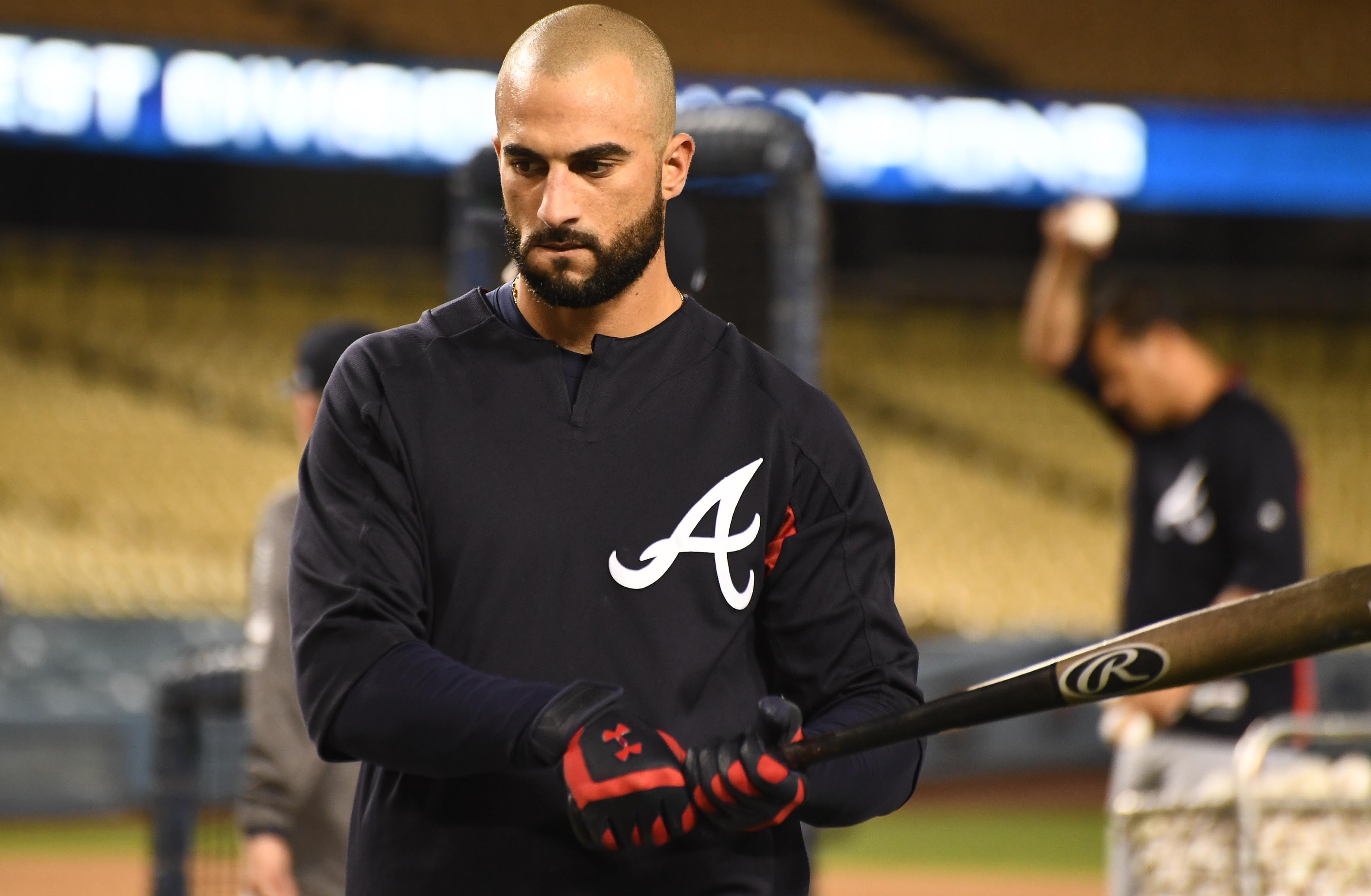 No player has sparked more contrasting views by Braves fan than Nick Markakis over the last few years.

For many fans, they see a player who hit .284, including .297 last year, and was the only other form of consistent offense during a rebuild that was quite often Freddie Freeman and not much else. They see a stable source of on-base percentage (only one season in 13 years with an OBP under .342). They point out that Markakis has won three Gold Gloves, including last season, and also won his first Silver Slugger. And it’s not lost on them that Markakis is Georgia-bred who moved back to the state after leaving the Orioles four years ago for the Braves. It would seem all-too-sensible to bring him back for 2019 – and maybe beyond.

Other fans, though, are quick to point out other equally indisputable observations. They point out that Markakis carried a wOBA in the low .320’s over his first three seasons in Atlanta – average for a major league outfielder. They refuse to accept that Markakis’s defense is as good as advertised and awarded, referring to a 2 DRS over the last four seasons and an Outs Above Average of zero in 2018 – as in perfectly average. They laugh about the fact that Markakis took home a Silver Slugger last season, pointing out several other outfielders like Brandon Nimmo, Bryce Harper, Charlie Blackmon, Rhys Hoskins, and Lorenzo Cain who deserved the Silver Slugger over Markakis.

There’s truth to nearly all of this. Markakis was both a consistent source of offense, most notably in 2018, and awarded with postseason hardware that he didn’t quite deserve compared to other players. Markakis can be both a Silver Slugger winner and an average hitter for an outfielder. Further, his defense can both be award-winning and average from a voting body that has awarded defensively-challenged players like Derek Jeter Gold Gloves in the past.

Whether you think he was underrated and earned the recognition he received or you think Markakis is propped up by his fanboys as more than he actually is, the question that I used to title this article with is far more nuanced than either approach – why not Markakis?

As in, why not Markakis in 2019? Why shouldn’t the Braves simply sign Markakis and roll the dice for another season? Again, the answer is more complex than people want in an environment that pushes hot takes over rational analysis.

First, we start with what I can only assume is an universally acceptable hypothesis: the Braves could do worse than Nick Markakis. If you are hesitating right now, I ask you to search “Garret Anderson, 2009,” “Melky Cabrera, 2010,” or even “B.J. Upton, 2013.” I know he goes by Melvin now, but he was B.J then. And unlike any of those options and scores more I could shake you to your core with, Markakis is not just a better player but not even that bad of an option compared to the league. Over four seasons in Atlanta, Markakis had a .328 wOBA and a 103 wRC+. The average major league outfielder posted a .324 wOBA and a 102 wRC+ over the last four seasons. Now, that number includes all outfielders and we should adjust it in our minds because center fielders typically produce a bit less than corner outfielders. Hence why I have Markakis at an about average level for an outfielder – especially considering his numbers are skewed a bit by his big 2018 season. You can argue he should be below-average, though.

Let’s talk about 2018, by the way. We all know what Markakis did, but it’s what he didn’t do that causes a bit of disparity in how you view his best season in nearly a decade. Markakis had a magical first half, including a walk-off homer on opening day and a trip to the All-Star Game. He belted ten homers before heading to the Midsummer Classic in his pajamas. Just for reference, he hit 24 total homers – or an average of eight a year – in three seasons in Atlanta before 2018. Nobody would have questioned a Silver Slugger award for a guy who hit .323 with a .372 wOBA. But in the second half, it all disappeared. His average after the All-Star Break was .258. Even more pressing was that his wOBA fell nearly 70 points. Markakis then added one hit – a single – in 15 trips to the plate against the Dodgers in the NLDS.

Let’s get back to the reasons why signing Markakis is a bit more complex. Despite coming off his most productive season since his best days with the Orioles, Markakis’ future success is far from guaranteed. Next year will be his Age-35 season. One reason players like Michael Brantley are getting two years and not longer is because the facts are clear as day as pointed out in a 2013 study by Jeff Zimmerman, which is unlikely to have changed. With increased policing of steroids and other performance enhancing drugs, the decline players see after they turn 30 is a free fall according to wOBA. Certainly, this isn’t a rule. Every player is different. But where as the uncontrolled use of PEDs helped to slow the rate of decline for a decade before 2006, players now see regular decline every year. Markakis’ 2018 offensive production is unlikely to be sustained moving forward. Not that he will be completely inept (Steamer projects a wRC+ of 103 for 2019, for instance), but expecting another 114 wRC+ like we saw last season likely won’t happen.

But while his decline in the second half of 2018 and the aging curve are reasons to hesitate when it comes to Markakis, the biggest reason boils down to team need. While the Braves’ offense could be explosive in 2019 as currently constructed, there are still concerns even after adding Josh Donaldson to the fold. According to Steamer – which is a very conservative projection system – only three Braves (Freeman, Donaldson, and Ronald Acuña Jr.) are projected to have an OPS over .775 in 2019. Ozzie Albies could make it a fourth, but with potential offensive issues already present at catcher, shortstop, and center field, adding a stable source of offense in right field is an important factor. It’s why the Braves engaged the Mariners about Mitch Haniger. Suffice it to say, Markakis doesn’t have quite the same factor in a lineup as a guy like Haniger.

Remember when I said the question “why not Markakis?” can get pretty nuanced? Because despite the issues related to Markakis, there is still a pathway back to the Braves where it makes a good deal of sense. While it would likely be foolhardy to expect another 2018 out of Markakis – even if that was built largely on the first half – Markakis is also unlikely to slip too far in 2019. As I’ve said, he’s a league average bat for an outfielder in all likelihood and his durability is a plus.

But counting on Markakis to be a cleanup hitter is a mistake. One of the strongest criticisms to signing Markakis four years ago was that, even then, he was a complimentary player being signed to a long-term deal in his 30’s during a rebuild. It made little sense. The 2018 first half helped to make the deal look pretty good, but we can take those former criticisms and apply them to now. Does it make a lot of sense to add Markakis when you need a more dynamic bat in the lineup to support your three studs? Not at all and that answer becomes even more pressing for a team hoping to be a World Series contender in 2018.

Again, there is a pathway where it does make sense. Much like how the Braves sought to improve their offense at a position where they already had a good situation when they signed Donaldson, if the Braves improve their catcher position by adding J.T. Realmuto, the pressing need to improve the offense even more isn’t quite as significant. At that point, adding a complimentary player like Markakis on a stop-gap deal starts to look like the kind of deal that winning ball-clubs make every year. In a lineup that includes Realmuto, Markakis is, at most, your fifth-best hitter and more likely to be your sixth-best hitter. Theoretically, in that type of setup, Markakis could hit sixth behind the quartet of Acuña Jr, Donaldson, Freeman, and Realmuto along with Albies. By taking away much of the pressure for Markakis to perform at a 2018 first-half level, you are better able to deal with the low .320’s wOBA he probably will put up.

Is Markakis the most ideal addition? No. Even if the team adds Realmuto, there are other possibilities that make just as much – if not more – sense even if it means the team goes to a platoon. I went over one of them recently. But even for those of us who aren’t crazy fanboys for him, there is a way to fit Markakis into the 2019 roster that becomes a reasonable move. He’d probably lose time to Adam Duvall, Johan Camargo, and Charlie Culberson, but that likely would be good for Markakis for his overall production. After all, we are dealing with an aging curve here. Markakis is well-loved by the Braves’ clubhouse, a model to follow for younger players, and probably will represent decent value on a team-friendly deal. If you can take the pressure off Markakis to have to be one of the key hitters in the lineup, bringing him back for a year looks like a possible solution to the black hole currently in right field.