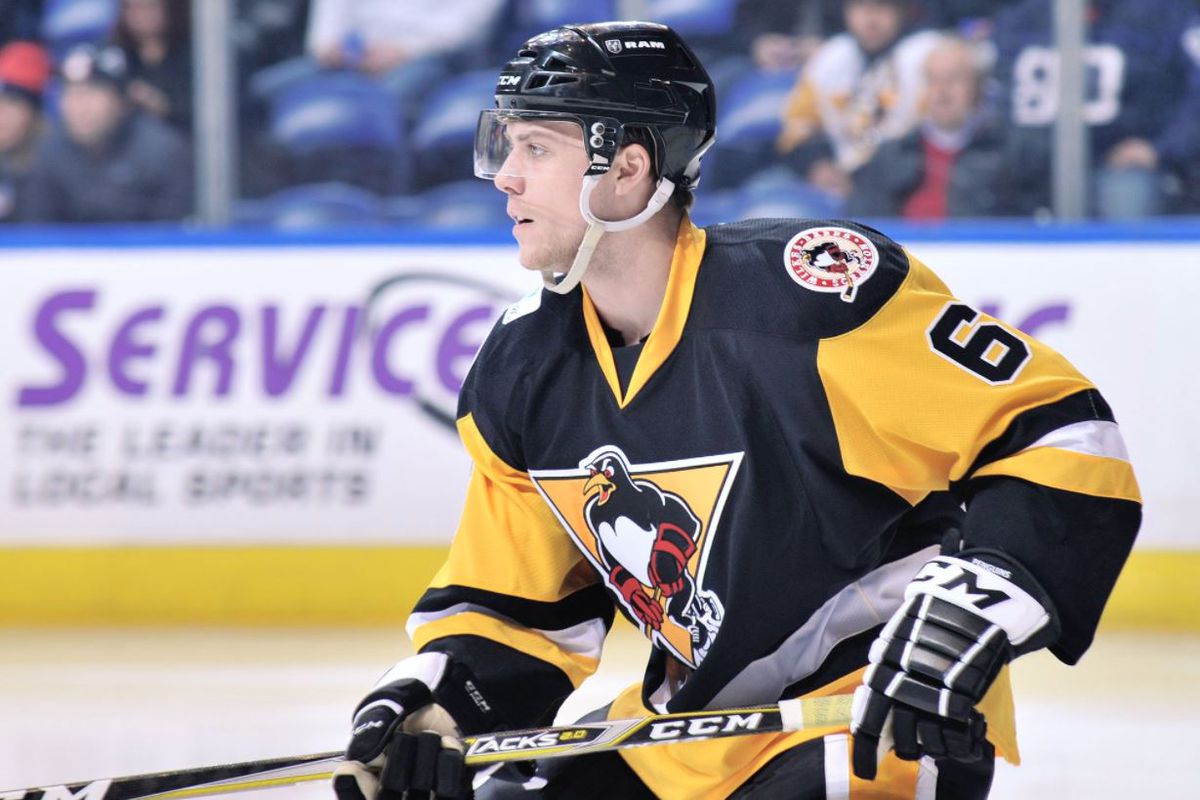 When the Pittsburgh Penguins signed defender Ethan Prow, the word was this kid was spectacular. He set a program record with 80 assists and came in second all-time with his 99 total points in his four years at St. Cloud State. And his senior season? Aside from being named the team’s captain, he tied a program record for most assists by a defenseman with 30 and added on eight goals. He was an offensive locomotive and as the Penguins flew high heading into the 2016 playoffs his addition made everyone feel giddy for the future.

This kid was good. And he was a right-shot defender with all the upside in the world. Then, life happened.

The adjustment between NCAA and pro hockey is not an easy one and some players never make it over the hump. As a rookie, he struggled at times and only managed 16 points in 59 AHL games. His second year? Things felt, if possible, worse. There were stretches where his play just felt lacking. That, compounded with a shortened 40-game campaign caused the Penguins organization to take a critical look at Prow and his place in their plans this summer.

The team signed him to a single-season deal worth pretty much nothing. Message? Show us why we should keep you around, kid. Prove to us you’re a worthy investment.

And all the blueliner has done this season? Become the first Wilkes-Barre/Scranton defender to hit double digits in goals in a season in close to a decade. And he did it by Christmas. He’s been incredible offensively. Currently, the Minnesota native is fifth in the league in scoring from the blueline and of the four players ahead of him only one could be truly considered a prospect, the New York Rangers’ John Gilmour (he has one more point and the same number of goals).

It’s getting to the point where people have begun to remark Prow doesn’t belong in the AHL or that he just is getting too good for his competition. Because in addition to his higer offensive output, he’s worked hard to improve his game. He seems to have reprogrammed a lot of his defense to be something stronger and his tenacity with and without the puck has grown as he’s matured as a player.

All of this is not going unnoticed. He’s been named the Wilkes-Barre/Scranton Penguins representative for The AHL’s All-Star festivities this upcoming weekend in Springfield, Massachusetts.

Of the six names above, all six have dressed in NHL games in the 2018-2019 season. Jarry has the least games played with two, but arguably would be an NHL-level goaltender on another team. His obstacle is the two other former AHL All-Stars between him and the NHL net. The point is that while All-Star selection, especially in the NHL, can be completely meaningless, the last few years have shown All-Stars from WBS making the show with a 100% success rate. Prow also holds the distinction of being the first defenseman chosen from WBS since the format change in 2016.

This isn’t assurance Ethan Prow is a future NHL All-Star, not by a long shot. But, it’s encouraging to see a prospect some had left for dead play well. Prow certainly isn’t Calen Addison or Jordy Bellerive – he’s not the kind of prospect people are going to stop and stare at. Hell, some of you probably forgot he existed until you read the title of this piece. But, he’s making sure the organization knows his name. He’s making sure they know just how much he’s willing to work to make it to the NHL. Just because it took him a little bit, doesn’t mean he doesn’t have what it takes – keep an eye on him.