RECAP 55: We Look Like Lightning. Pens Struck Down By Tampa 5-4 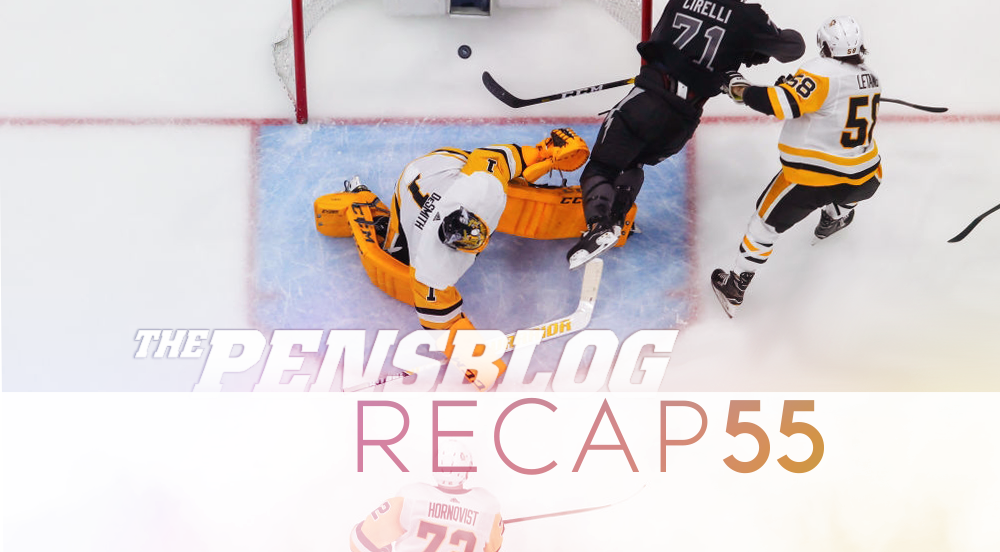 RECAP 55: We Look Like Lightning. Pens Struck Down By Tampa 5-4

Well, the Penguins lost their 4th in a row, a stretch in which the only point came in an OT loss.  They’ve averaged just 2 goals per game over that stretch and have been outscored 15-8.

The powerplay has looked anemic, the penalty kill hasn’t been great (though they killed off the only PP they faced last night), and they just flat out haven’t played well overall.

Or, perhaps it had something to do with this:

As standings are at this moment, first-round series would be Tampa Bay-Pittsburgh.

No matter which way it goes, these two teams are expected to meet each other at some point in the postseason.  No matter how poorly the Pens play or how great the Bolts play, the road to the Stanley Cup goes through one of Pittsburgh or Tampa.  And as it stands right now, the Pens, in the 2nd Wild Card slot, will see this Tampa team right out of the gates.

Here are the lines and defense pairs that will be deployed against the Lightning. pic.twitter.com/DeRFjvOcFY

With this, Crosby officially surpassed 66 for most games played all time in Penguins history.  Seems good.  On the back end, HCMS made no changes to from the team that fell in OT to the Panthers on Thursday night, save for Murray being healthy enough to back up DeSmith.  Gotta think that if this was a playoff game, Murr’d be playing.  Wouldn’t stop anyone from calling him soft, but so it goes.

HCMS did change up the forward lines, though, putting Bjugstad back in the 2C hole and moving Cullen back down to his rightful spot on the 4th.  Simon-McCann-Hornqvist, who had a really good game together on Thursday, stayed together for the kids.

Just like Thursday in Florida, there were stretches of play in each period in which the Penguins dominated, but by and large, Tampa controlled the puck most of the game.  Despite Tampa controlling the puck, the Penguins were the team to open the scoring against the flow of play.

With the Bolts looking to set up shop in the offensive zone, Maatta does well on the zone entry to direct the entry to the corner.  This play he makes here is so, so subtle but is indicative of his play this season: he just doesn’t give up much to the inside.  Textbook defending from Maatta.

That forces the play back up the wall, where Blueger and Cullen are lurking.  Cullen makes a great play here to steal the puck and desperately get it up to Blueger to send him in on a 2v1 with Wilson to get Wilson his first NHL goal.  Finally.

But about a minute and a half later, the Bolts were level.  After the Pens top line had trouble getting it in, a clearance by the Bolts and a rough bounce sent Letang back in transition with Crosby’s line still up ice.

He hits Rust in the neutral zone, but watch here too as Tampa does the same thing to Rust that Maatta did on the previous goal.  Rust has two options: stop up and try to find someone with a pass or chip it in deep and try to win a race.  The latter seems tough given the amount of ice to skate through between the defender and the wall.  So he stops up and tries to hit Sid on the far side.  It…..did not go well.  He made a bad pass, Letang blew a tire joining the rush, Pettersson blew a tire on the far point, and the Bolts were off on a 2v0.  They ain’t missing.

Bryan Rust on giveaway on Tampa’s first goal: “The decision was great. Sid was open. The pass was fucking horrendous. That one’s on me.”

Love that kind of transparency and accountability.

Under a minute later, the Bolts took the lead for the first of two times on the night.  They got themselves a controlled breakout, gained the zone easily, and went to work.  Again, Maatta does so well here on the entry, keeping Paquette to the outside and forcing him back to the point.  Unfortunately for Maatta, he had no forward help this time around as Hornqvist followed the center drive and McCann got himself lost focusing on Paquette peeling back.  With McCann a little too deep, he couldn’t get out on Cernak to challenge or get in the shooting lane.

Hornqvist, though, did get his skate in the lane, but it caused a little ramp effect for Cernak to collect the K in SKATE and beat DeSmith.

Then, to open up the 2nd, the Pens looked like they were in the driver’s seat for the first half of the period, getting a powerplay 7:19 in after Palat tripped up Sid.  Right off the draw, the Pens got set up, but as Phil! Kessel Walked in from the half wall, everything fell apart.

Phil! initially does well here to suck the forward chasing him and the defenseman on his side of the ice in to him.  Sid cuts into the soft area looking for a pass and a one timer, but Kessel’s pass was dogshit and went off of Killorn’s stick while Cirelli made a nice play on Crosby to keep him from doing anything with it.  That left the puck for McDonagh to collect and hit Killorn flying the zone.

Plays like this are why some are crying out for 2 D-men on the powerplay, despite it likely causing the Penguins to not be as effective when Malkin returns.  This is because of Guentzel’s pinch on McDonagh.  Instead of him retreating to help Letang, he sees the bouncing puck make it by Crosby and tries to make a play on it.  He just doesn’t and it leaves 58 to deal with the 2v1.

But under a minute later, the Pens pulled one back after the remainder of their lone PP chance was negated by a Bjugstad penalty.

Some back and forth between the two clubs was met with Dumoulin blocking a shot that allowed Rust to spring McCann.  John Johnson does well here to get up in the rush to support McCann, driving the net to cause enough havoc for McCann to rip one by Vasilevskiy.

Vasi probably would want this one back, but fuck him anyway.  Fuck John Johnson too, but credit where it’s due.

never realized how big of an asshole name he has and it doesn’t even have the name jack in it https://t.co/eQyLArMhq2

Shortly thereafter, a trend developed where a fight occurred and a goal followed.  First, it was Blueger getting his first NHL fight by going at it with Erne after a DeSmith save.

Then, Crosby and Tyler Johnson got matching roughing penalties after Crosby rag-dolled the little boy.  Good on 87 for not Adrian Peterson-ing a small child here.

On the ensuing 4v4, Rust popped back up again, this time in the goal column following a lost faceoff by Guentzel.

The two didn’t stop rumbling and bumbling down low, beating the shit out of the Bolts with some elite board work that ended with Money Bag channelling his inner Sidney Crosby down low, circling out and feeding BFR on the back stick.

Towards the end of the period, John Johnson and Alex Killorn dropped the mitts for a scrap and under 5 minutes into the 3rd, a goal was the result.  But because it was Jack Johnson doing the fighting, the puck obviously had to end up in the Penguins net because that’s how these things work.  I don’t make the rules.  I just tell you what they are.

This one came from the Bolts catching the Pens in transition.  The Pens 4th line was doing some work along the boards, but as it came up the wall, it spit out to Girardi to jump start the attack.

He deferred to Stamkos and drove the net, taking Blueger with him.  That gave the Lightning numbers across the center of the zone and enough gaps to work with it.  Stamkos sucked in Dumo here, while Wilson missed Palat in behind him.  Palat took the feed, Cullen and Wilson broke down and both jumped at him, leaving Tyler Johnson all alone on the back side with the goal.

Everything broke down to get the puck to TJohnson’s stick here, but what the hell is Jack Johnson doing? He’s trying to block the shot, sure, but he just gives the shot up to TJohnson instead of putting any sort of pressure on him or trying to make him uncomfortable in shooting it.  Can’t excuse the Wilson/Cullen breakdown, make no mistake about it, but this is just poor defending too.

It would take Tampa about 10 more minutes to finally get the winner.  This, too, would come on the counter attack after Guentzel failed at splitting the D.

Tampa turned it back up ice, Pettersson tries to slow it all up in the neutral zone with a long pinch, but it took he and Letang back and opened up a cross-ice passing lane that just didn’t come off.  The Bolts, though, had the numbers and positioning, swinging it down low and getting back to work.  Watch as Miller works it down the boards here.  The Pens have 3 guys up high above the faceoff circles and a zillion square feet of space between them and the D, even as the puck ends up in the opposite corner.  All of this open ice allowed Miller free pass to skate straight to the top of the circles and take Killorn’s pass, measure up his shot, and beat DeSmith.

Two goals in a row where the Lightning shooters had an hour to pick their shots.  DeSmith probably wants this one back, too.

Just over a minute later, the Pens pulled one back off a great individual effort from Crosby.

Pearson-Crosby-Kessel got it in deep and when it looked like the Bolts were going to move it north with ease, Phil! made a great play in the far corner to force a pass back down low for Crosby to make his paper.

Sid picks some pockets and feeds Pearson storming into the slot to break 14’s goalless streak.

The pinch here from Letang sets it all up too to keep the puck in the zone, but instead of giving Tampa a chance to throw it back up the wall behind Letang, Phil! seals everything off down low, giving Crosby the chance to do his magic.

But that’d be that and the Bolts would see it out.

Brian Dumoulin, a guy who could buoy just about anyone, is feeling the full effect of the Johnson anchor these last two games. I know, beating a dead horse, but seriously. There's a black hole on the Penguins blueline and it doesn't fit anywhere.

No better time or place to snap a losing skid than in Philadelphia on Monday night before heading home to host Edmonton on Wednesday.  Do it.  Go Pens.