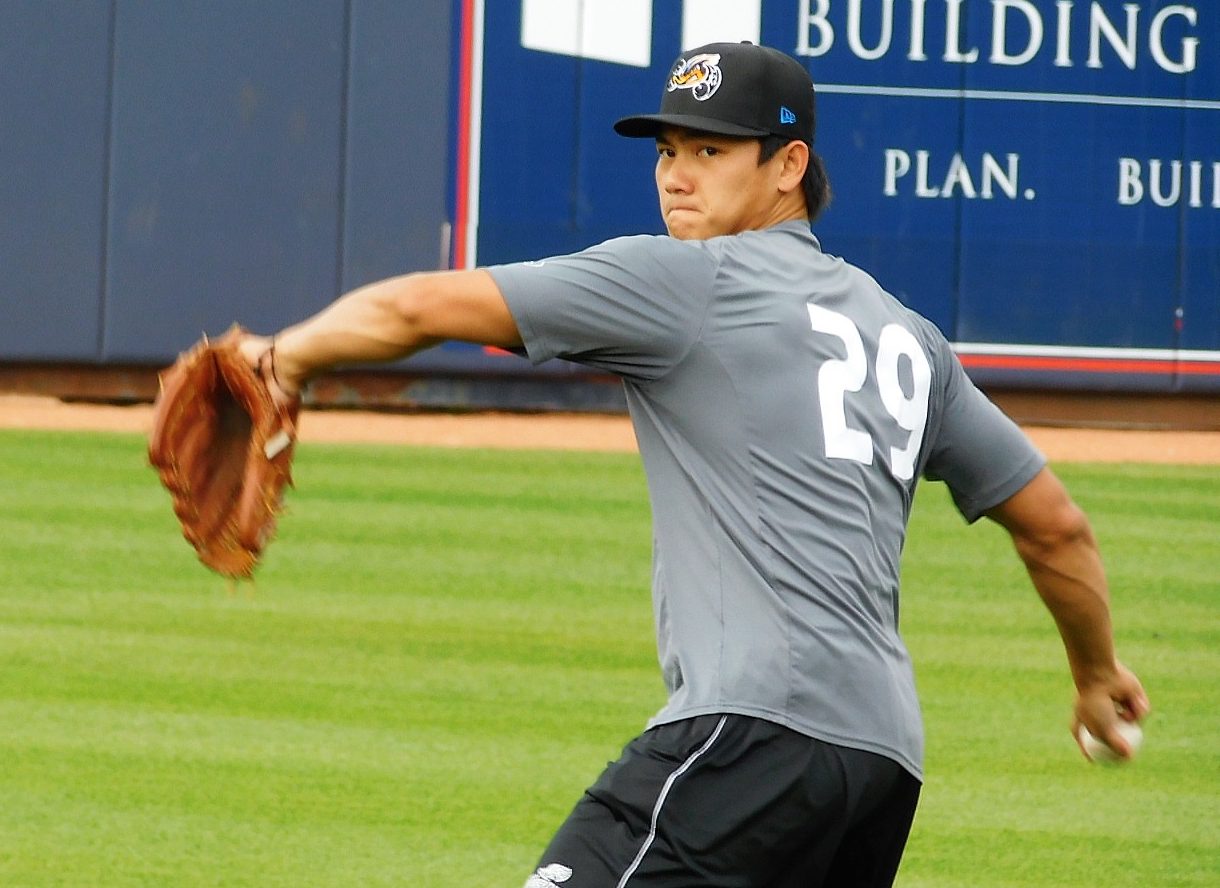 The Indians have a very short list of non 40 man roster minor leaguers who have been invited to spring training this season including position players Mike Papi, Mark Mathias and Li-Jen Chu, but of all those coming to camp, the one who could have the biggest and most surprising impact on the Major League team could be Shao-Ching Chiang.

Chiang came to the Indians as an international free agent in 2011, but didn’t really debut until 2014 when he was joined by a group of international free agents from Taiwan, Chiang’s homeland. This group included the catcher Chu, short stop Yu Chang and closing pitcher Ping-Hsueh Chen. While this group all broke in together with the Arizona League champion Indians in 2014, they quickly split as Chu needed Tommy John surgery, Chen was held back for production reasons and Chang quickly advanced.

Chiang looks in for the sign during a 2014 AZL Indians game at Goodyear Ballpark. – Joseph Coblitz, BurningRiverBaseball

Chiang took a more methodical approach to the minor league system, spending a full year in Mahoning Valley as a 21 year old before another full season at Lake County. In 2017, Chiang earned a bit a fame for throwing a no hitter with the Lynchburg Hillcats and was promoted to Akron shortly after. While he initially struggled in AA in 2017, he was incredibly dominant there in 2018, earning his way into the Clippers starting rotation.

What is most interesting about Chiang’s success is how he goes about getting batters out. Unlike nearly all of the Indians top pitching prospects, both in the rotation and bullpen, Chiang is far from a flame thrower. While his pitches have movement, that movement is down rather than lateral. This leaves him little room for mistakes, but he has generally avoided those mistakes over the years with a MiLB career HR/9 of 8.0 and a BB/9 of 1.6. His consistency over the years places him among the high floor, low ceiling prospects and he came in at #41 in Burning River Baseball’s 2018 minor league rankings after being #22 in 2017.

Chiang will never strike out 13 per nine (he’s lucky to match half that mark), but there is a good chance what the Indians need is someone to break the pace. With as good of an infield defense as they’ve had since Roberto Alomar was traded to the Mets, a ground ball specialist makes a lot of sense right now, especially with the outfield in shambles.

Since becoming a regular starter, Chiang has had a ground ball rate between 45% and 58% with a fly ball rate around 30% aided by an unusually high infield fly ball rate. Chiang doesn’t miss bats, but stays close enough to the strike zone that hitters have to swing at his pitches and aren’t able to square them up.

Currently, there are two big obstacles in Chiang’s way. First, there would have to be a horrific tragedy for him to break into the starting rotation. His ceiling is nowhere near the level of any of the Indians current five starters or that of Triston McKenzie, Sam Hentges and others who will likely start 2019 either at AA or above. He could be a Major League starting pitcher, but it isn’t likely to happen in Cleveland.

Chiang’s second issue is whether or not his tricks will even work against more advanced hitters. He had major issues in AAA once he was promoted in 2018 as his k/9 dropped below six for the first time since 2015 and his ERA ballooned to 5.01 through 64.1 innings. While he earned the win in each of his first three starts for the Clippers, he allowed 11 earned runs in those three games and through his first eight had a 5.28 ERA backed by a .441 SLG against. He allowed fewer than three runs just twice during this run.

After pitching his best game of the year in early August (7 IP, 1 ER, 0 BB), he had his worst as he allowed four runs on six hits while retiring just two hitters against Durham. This faulty start pushed Chiang into the bullpen where he had mixed results in long relief.

While both of these obstacles are significant, they can be shifted to be seen as a positive. While it was a short stint, in his two relief appearances late in 2018, Chiang went 8.2 innings while allowing just two earned runs, no walks and six hits. Most starting pitchers don’t like being designated to the bullpen, but we have seen revitalization of many careers in this manner, including two in the Indians system in the last few years in Kieran Lovegrove (since signed by the Giants as a free agent and invited to MLB camp) and Rob Kaminsky (invited to MLB camp by the Indians as a left handed reliever). There is a good chance that all the work Chiang gets in MLB spring games this year will be in short appearances and relief work and, if he can prove effective in that role, there is room for him in the Indians bullpen right now.

Chiang could end up being an option similar to Dan Otero (who is still on the Indians roster and a near guarantee for the 25 man to start the year) as a ground ball specialist who can get a double play to get the previous pitcher out of any situation. With Otero on the roster, the Indians would be unlikely to want Chiang, but Otero struggled greatly in 2018, is already 33 years old and is only guaranteed $100k beyond 2019. If he should falter again this season, the Indians have a cheap, young in house replacement in Chiang.

This means that Chiang will almost certainly start the 2019 season with the Clippers, but could debut at any point in time during the season with the big league club. If he does, he could be the Indians second Taiwanese player ever following C.C. Lee who pitched in 47 games between 2013 and 2015. Of course, it will be a race for that honor as both Yu Chang and Chih-Wei Hu are already on the 40 man roster and have a solid claim on spots in the active roster for the upcoming season.