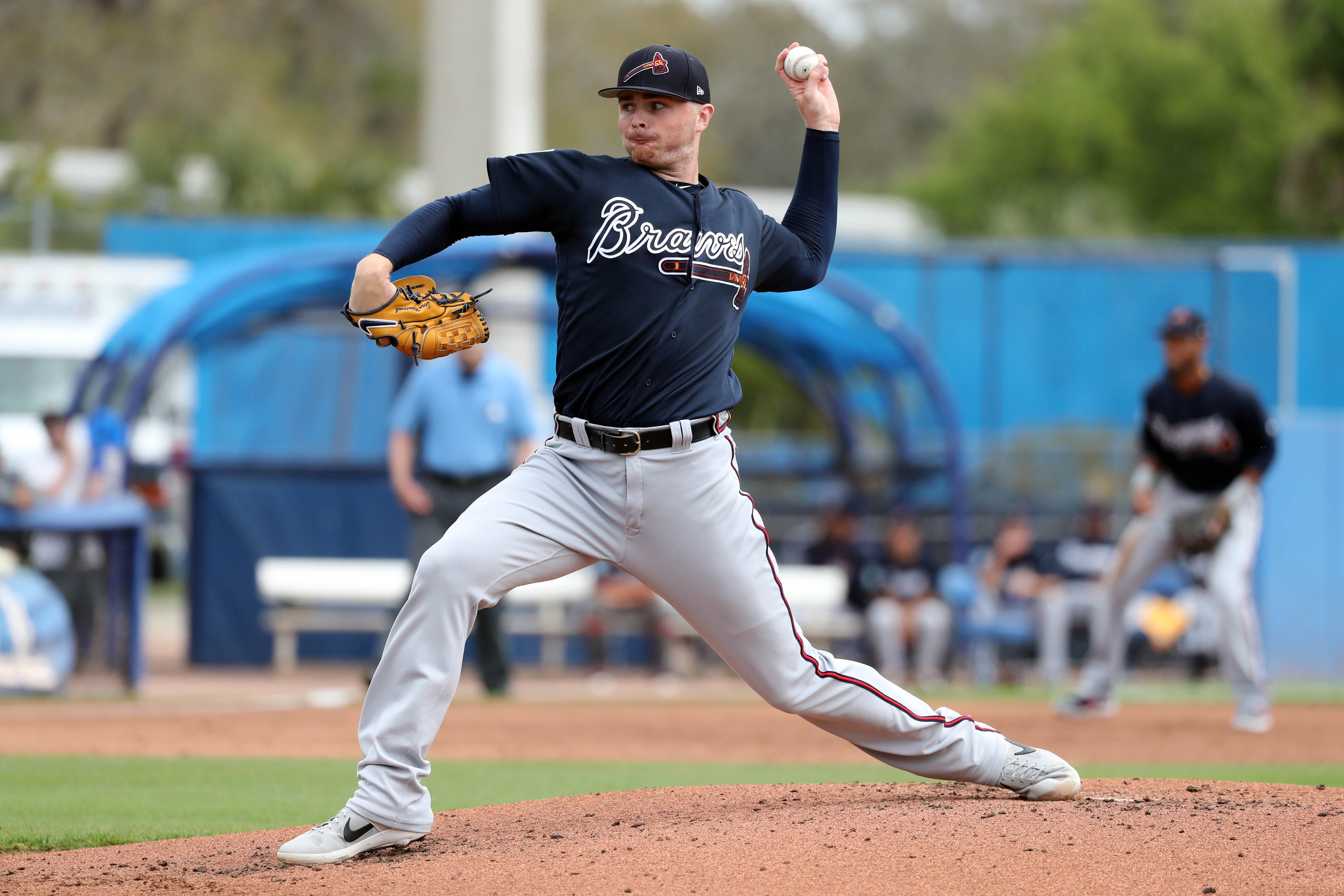 It wasn’t pretty, but the Braves stopped a seven-game slide to hold on for the win Wednesday. And by “it wasn’t pretty,” it really wasn’t pretty. Atlanta had a trio of errors. Pedro Florimon has found a way to commit six of them this spring while Johan Camargo gets a bit of a pass because he was playing left field.

It also wasn’t pretty because Sean Newcomb was struggling terribly with his control. In five innings, he walked just as many batters, uncorked a wild pitch, and gave up a homer to Kevin Pillar. He only gave up two hits, but his inability to command his pitches led to a truly rough outing, though not everyone agreed. His manager, Brian Snitker, was a fan, saying that “he loved what he (Snitker) saw from him (Newcomb). According to Snitker, Newcomb was turning it loose.

Hard to really take that at face value. Who “loves” what they see from a player who has walked five? Newcomb isn’t at risk of losing his spot in the rotation. That was true even before the injuries to Mike Foltynewicz and Kevin Gausman with the latter possibly heading to the IL to open the year as he catches back up. But as other starters work their way in and potentially impress the Braves, you have to wonder just how long Newcomb’s leash is. I’ve been a big Newk guy for awhile, but it’s hard not to be frustrated.

Arodys Vizcaino added to the ugliness as he failed to work through an inning, yielding a pair of runs on a hit and a walk. He did strike out two and one of the runs scored because minor leaguer Andres Santiago, tasked with ending the seventh, allowed a two-run homer. But with so many questions about the bullpen, the last thing fans and the team wanted to see was Vizcaino struggle through one of his last tune-ups for the season.

On the brighter side, Chad Sobotka and Jonny Venters each worked scoreless innings around Vizcaino’s laboring in the seventh. Venters has been solid all spring, but Sobotka got off to a rough start once games started. He’s turning the corner and might have re-entered the bullpen discussion.

Offensively, only a few starters made the trip to Dunedin. Dansby Swanson was hit-by-a-pitch (or was he?) and added his first double. Camargo, again playing left field, had a pair of singles while Ronald Acuña Jr. rocked a pair of singles and just as many ribbies. He also swiped his third base of the spring. Charlie Culberson went hitless, but Brian McCann had a double. The big knock of the game came from journeyman Andy Wilkins, who homered. He’s tabbed to be the starting first baseman for Gwinnett.

After opting out of his contract with the Brewers the day before, Josh Tomlin has joined the Braves this morning. The 34-year-old had spent his professional career with the Indians before hitting free agency this offseason. In an age of increasing strikeouts and triple digit velocity, Tomlin is a throwback who rarely touches 90 mph. To survive like that, you have to live off deception, stubbornness, and command. Nobody has walked fewer batters per nine innings over the last eight years (hat-tip to Fangraphs for that). But control and command aren’t the same things and Tomlin was getting brutalized in the strike zone.

In 2017, Tomlin had a 4.98 ERA, but a 4.12 FIP and a 4.11 xFIP. Getting back into that range is key for him. Last year, it clearly went the wrong way. Tomlin did visit Driveline in the offseason to work on his delivery and pitch selection. I linked to his interview earlier in this blurb.

What can we expect from Tomlin? Well, he’ll get a chance to impress on Saturday when he starts for the Braves. But he got a minor league deal for a reason. He could be headed to Gwinnett. Or he could be this year’s Anibal Sanchez? Right now, he’s definitely on the bubble.

While on the road back to full-time status, Soroka’s shoulder discomfort as a result of weight-lifting took him out of the opening day discussion. Needing more time to catch up, he was optioned to Gwinnett on Wendesday. It appears he’d be ready to contribute again by mid-April at the earliest, though when he gets back to the majors will be more dependent on when the team needs him next.

With Tomlin’s addition and Soroka’s demotion evening out, the spring training roster sits at 39 players with seven, including Tomlin, in camp as non-roster invitees. At least one other (Foltynewicz) is headed to the DL with a second (Gausman) a possibility.

While we mainly think of spring training as a time where players compete for the major league opening day roster, players are competing for spots in the minors as well. Those that don’t secure spots could be cut. Eight such players have gotten the boot.

While none of the names are really shocking, OF Justin Smith might be the one that kind of stands out. Smith was considered a bit of a sleeper after being picked in the 20th round in 2017 out of Florida’s St. Johns River Community College. Before that, he was part of the Miami Hurricanes program. Known for some big-time power, Smith racked up 13 homers in 386 PA in the minors – spent entirely with Danville and Rome. But he also struggled tremendously with pitch recognition, especially in a 33-game run in Rome last year where he struck out 42 times and while only coaxing five walks. Overall, he hit .225/.301/.386.

Undrafted out of Southern Illinois-Edwardsville, McReaken appeared seven times last summer for Danville. He struck out 15, but walked eight, hit four batters, and uncorked three wild pitches. Selected seven rounds ahead of Smith in 2017, Simmons had a 3.86 ERA in 49 innings – all but two with Danville. Vallejo appeared in six games in the Dominican Summer League last year, walking seven batters to six K’s. Welsh was another undrafted free agent, this time out of Arkansas State. He pitched 14 times last summer with 20 K’s and 13 walks in 25.2 innings spent mostly with Danville.

A 26th rounder back in 2016, Crowley only hit .220/.281/.333 mostly as a second or third backstop with appearances in Florida, Rome, Danville, and the Gulf Coast League along the way. Luis Mejia appeared for the first time back in 2015 in the Dominican Summer League. After a year in the Gulf Coast League, he spent much of the last two years with Danville outside of 29 games in Rome. A slick-fielding glue guy who kept his teammates loose, Mejia is short on talent (though decent enough at shortstop) and high on intangibles. Originally drafted by the Royals in the 7th round of the 2014 draft out of the University of Virginia, Brandon Downes was acquired last summer by the Braves for some depth. He hit just .205/.273/.315 with Mississippi after the trade.

With spring training nearing its end, here is my projected roster. I’m keeping Gausman off for now and adding Tomlin to the bubble. I’m also taking Fried off the bubble. I don’t know if he will be in the rotation, but I think he sticks around when the season opens.

-I’ve kept Adam Duvall on the bubble despite no obvious threat to his spot (sorry, Ryan LaMarre). That’s because players are becoming available as veterans opt-out of their minor league pacts and out-of-options players go through waivers or are traded. Tomlin represents the former. Well, according to David O’Brien of The Athletic, Duvall’s spot is “tenuous at best.” Duvall is hitting .135/.273/.297 this spring.

-In about an hour, the Braves will face a split-squad Rays team in their final “road” game of the spring. Kyle Wright takes the ball for the Braves simply looking to continue his forward momentum. The Braves have five more spring games after today – two at Champion Field, one at their new park in North Port, and two at SunTrust to start next week with the Reds before hitting Philly for games that actually matter next Thursday.