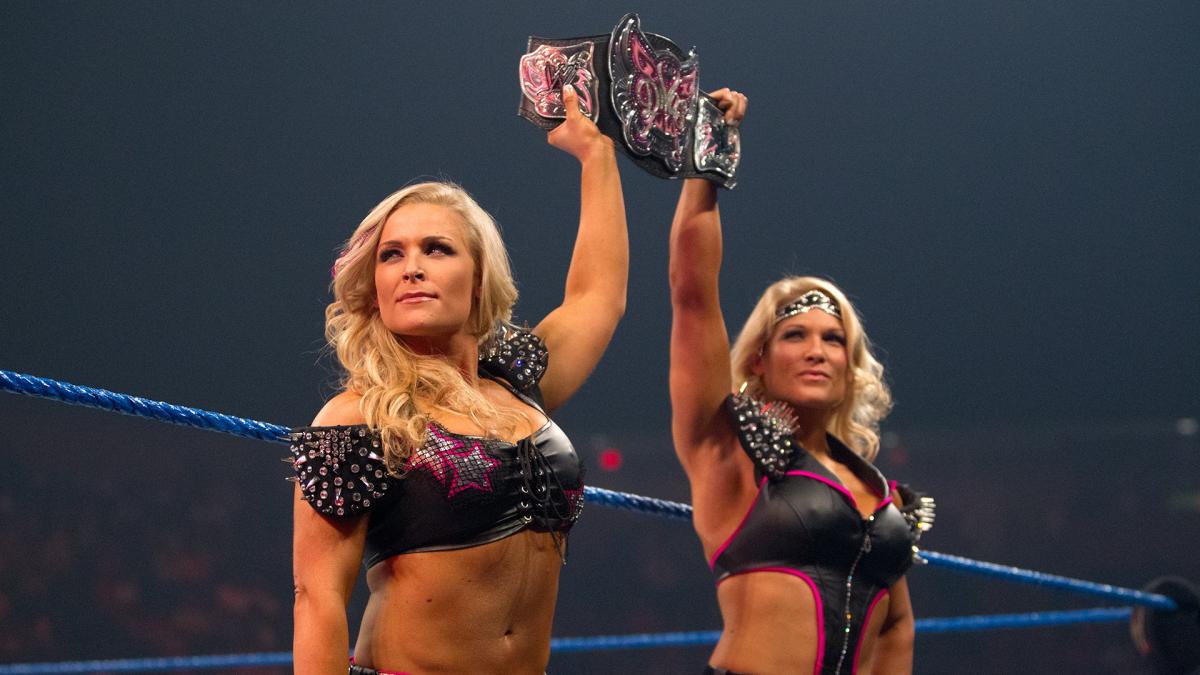 With WWE’s notorious thought process behind bringing back familiar faces in time for WrestleMania season, it was no different with the outcome of the events at Fastlane that teased an in-ring return for Hall of Famer Beth Phoenix.  That return was made official last Monday on Raw, where Natalya introduced Phoenix in responding to answering the open challenge for Champions Boss ‘N Hug Connection.

Natalya and Phoenix dubbed themselves “Divas of Doom” several years ago when they began teaming together to battle the Chickbusters, AKA former Divas Champions Kaitlyn and AJ Lee.  It was perhaps the start of something bigger, even though the Women’s Tag Team Championships were hardly a thought during this time.

Though there were the Bella Twins and LayCool, having Divas of Doom and Chickbusters helped further solidify the idea of tag teams in the Women’s Division.  The PG Era is something that the company has struggled with, and it was evident that the Women’s Division was on the cusp of breaking out to what it is today.  Having these teams absolutely had a hand in the breakthrough.  Even though there was no Championship to fight for, it helped for storyline progression – what there was of it.

Going back to present time, it was a great idea for the Boss ‘N Hug Connection to make appearances on different brands to state their intentions for the Tag Team Championships.  Considering how the company went about the inaugural Championship, having Phoenix in the picture rekindles what could have been during the early phases of the PG Era.

In addition, it gives the Tag Team Division a boost, which is certainly needed in its newborn stages.  It also gives way for a possible reunion for LayCool – should it happen – and even another Bella Twins return down the road.

That is not to say that these teams should have the Championships, but the idea of having past Superstars return to challenge for them promotes nostalgia, opportunities and new feuds.  The Women’s Division is stacked, but however when it comes to more prominent feuds, then having familiar faces helps the Tag Team Division prosper more than anything.

With the Boss ‘N Hug Connection loss to the IIconics on Smackdown, this twist creates interpromotional matches that fans wouldn’t get otherwise.  It is almost like a switch up, as Smackdown’s two biggest female Superstars are intertwined with Ronda Rousey for the Raw Women’s Championship.

Since then, a fatal four-way has been made official for WrestleMania.  Nia Jax and Tamina have unfinished business with all teams involved, to which provoked a return for Phoenix in the first place.

While WWE loves bringing back familiar faces for the sake of ratings boosters, in this case a returning Phoenix helps bolster the Women’s Tag Team Division.  The rebirth of the Divas of Doom may lay groundwork to bigger things down the road.  If that means making sure the Tag Team Division is the best it can absolutely be, then everyone is a winner at the end of the day.