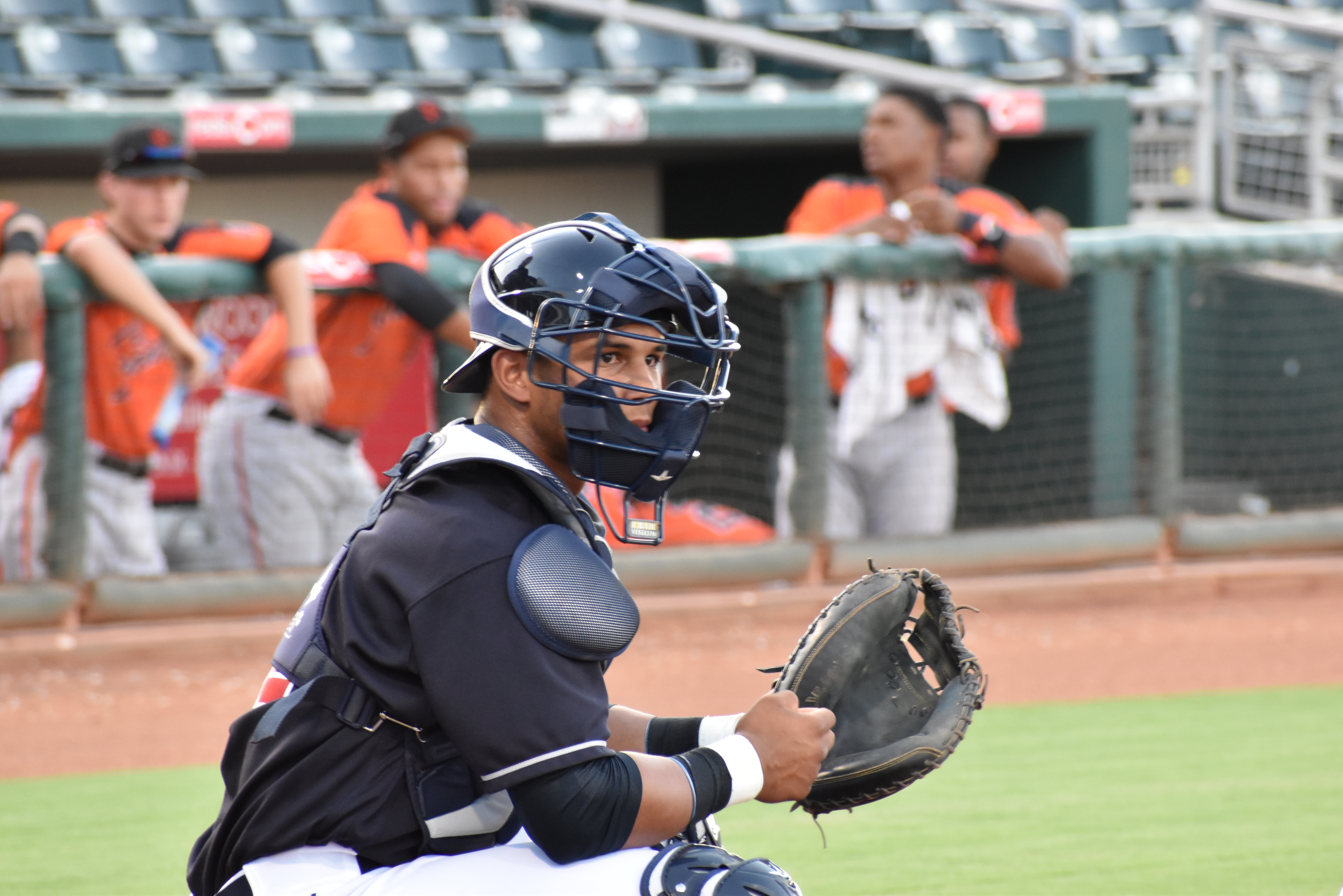 For the next installment of the top 10 Indians minor leaguers we will head behind the plate for the best catchers in the system. With Eric Haase making it to the big leagues, Jose Vicente moving permanently to first base and Miguel Jerez switching between first and left while leaving the tools of ignorance behind, there has been quite the shake up since last year’s top ten. Also in the top ten last year, Sicnarf Loopstok was released last week.

By Joseph Coblitz
There is no question that catcher is one of the weakest positions in the Indians farm system and that, combined with the excitement that youth always brings pushes Planchart to #10 on our catcher list. He had a great season last year on an otherwise dismal Indians/Brewers team, but this hype is entirely based on those numbers as he wasn’t brought up for extended spring in Goodyear. This potential places him above others like Gian Paul Gonzalez, Jason Rodriguez and Mike Rivera who are not performing at a high level at higher levels.

By David Wood
After playing last season in Mahoning Valley, Lopez had a very short, but promising appearance in Lynchburg in 2018, making things look positive for a full season run in Lake County this year. He has not been able to repeat that performance, however, as Bo Naylor‘s back-up. He has little power potential and doesn’t do much else offensively to look beyond that. Lopez’s greatest value at this point is his defense and that could be enough to keep him around for a few more years despite already being old for his level.

By Pete Conti
Rolette has a .328 OBP thus far for Lake County in fifty-eight plate appearances. He has eleven hits in that span with three doubles, one triple, and two runs scored. His strikeout to walk ratio is average 12 Ks to 8 BBs. Overall, he is a consistent catcher offensively and for the Captains he is more of a contact hitter rather than a power guy who likes to hit home runs.

By David Wood
Ice is currently the backup catcher in Akron behind Li-Jen Chu. Because the Indians have invested such a high draft pick on Ice he is going get many more chances to improve and establish himself as a legitimate catching prospect.

Currently Ice is hitting .141 in Akron. His career slash line over parts of four seasons is .207/.306/.336. He has not really figured it out at the plate so far. His best season was in 2017, back in low-A ball, with Lake County. He hit .228/.320/.370 with career highs of 22 extra base hits, 42 RBI and 42 walks. In the following year and a half of competition Ice has not been able to duplicate his success from the 2017 season. Ice is in position right now where the next wave of catching prospects are mostly in low-A or below. He has some time to work on his game. He needs to improve soon however because the Indians have several catching prospects in that next group of catchers. This group could move Ice out if he doesn’t improve on both sides of the ball in the next year or so.

Collins throws to second during a defensive drill in 2019 milb Indians spring training.

By Joseph Coblitz
Initially drafted as a catcher, Collins didn’t regularly play behind the plate until late last year (this is why he was included on 2018 third basemen list) and even now is playing first as often as he catches. He has been a poor offensive producer throughout his MiLB career and is performing at a lower level this year than he did during his second season in Lynchburg in 2018. At the moment, the Indians need for catchers outweighs Collins’ poor performance at the plate, but that could change as the many catchers drafted in the last two years move up the system.

By Joseph Coblitz
It has been awhile since the Indians had any catchers worth speaking of in the Arizona League and in 2018, they had three. Of these, Diaz is the lowest ranked, but had the best offensive numbers with a .355/.387/.503 line and just 18 strike outs in 41 games. While he had some issues defensively during his rookie year in the DSL, those appear to have completely disappeared. Diaz is very far from being a top prospect (we ranked him #89 overall in the Indians system in 2018), but he certainly has a legitimate chance of becoming one. Diaz is one of the primary reasons to believe in the future depth at a position that currently has none in the upper minors.

Lavastida hits a fly ball for the AZL Indians 1 during a 2018 home game. – Joseph Coblitz, BurningRiverBaseball

By Joseph Coblitz
Based on personal observation, Lava is the best game caller on this list and a fine defender behind the plate, two things the Indians organization values highly. Add to that a .415 OBP from his rookie season and what isn’t to love? The answer to that is obviously his .367 slugging percent. While he could develop more power, he was already on the more developed side compared to the competition in the AZL last year and will remain so if he starts 2019 with Mahoning Valley as is expected. While it may not help as much later on, it is currently a huge benefit for Lavastida that he is fluently bilingual. He certainly seems the type that could stick around for a long time in the minors, however, so we should have plenty of time to see how he pans out.

Ramirez waits in the dugout during a 2018 AZL Indians game at Goodyear Ballpark. – Joseph Coblitz, BurningRiverBaseball

By Pete Conti
Ramirez in 2018 for the AZL Indians had a .338 batting average with two doubles, one home run, and one triple on the season. Overall, he had twenty-six total hits in 77 plate appearances. The nineteen year old catcher (he will turn 20 next week) produced nine RBI for the club with a high strikeout ratio compared to walks on the season (11-6). Overall, Ramirez had a good year at the plate with little power behind his swing but still was able to get himself on base at a consistent level. Ramirez broke his hamate bone during extended spring training and is expected to miss most of the 2019 season.

By David Wood
Of all the players on this list Chu is the closest to being major league ready. Although he is in the midst of his sixth season with the Indians, and is the oldest player on this list, Chu is still only 25 years old. He is currently the starting catcher in Akron.

Chu attended his first major league training camp in the spring. He had an opportunity to perform in front of the major league coaching staff and really made the most of it. Manager Terry Francona was pleased with his defense and his ability to handle the pitching staff. This came on the heels of his Arizona Fall League performance that also went well for him.

Chu is currently slashing .238/.297/.365. With an OPS of .652 he has not been having his best season at the plate. This is his first full year in AA and I would expect his numbers to go up as the season progresses. Chu is clearly behind Eric Hasse in the catching pecking order with the Indians. What he needs to do is continue to improve and take advantage of the playing time in Akron. He needs to gain enough trust within the organization, that if there were a couple of injuries at the catching position in the major leagues the Indians would call on Chu, rather than a veteran from triple-A or from some other organization, to fill the void for them.

By Joseph Coblitz
In terms of my personal estimated average distance on fly balls and exit velocity, Naylor lead the way on the 2018 Arizona League Indians 2 and the Indians liked him enough to bump him straight to A ball in 2019 despite being a high school pick with no experience in short season. He had a slow start there this year, but has picked things up of late with five extra base hits in the last two weeks in May. He projects to be the top hitter among all those on this list, however, some don’t project him to remain behind the plate.

While a good blocker, Naylor doesn’t have a great arm and was tested at third base last year and there were rumors the Indians wanted to try him at second as well. He has played catcher exclusively in 2019 and if the Indians want to have any real options at the position in the future they would be much better off trying to fix his flaws at the position rather than just moving him somewhere else to keep his bat in the line-up.