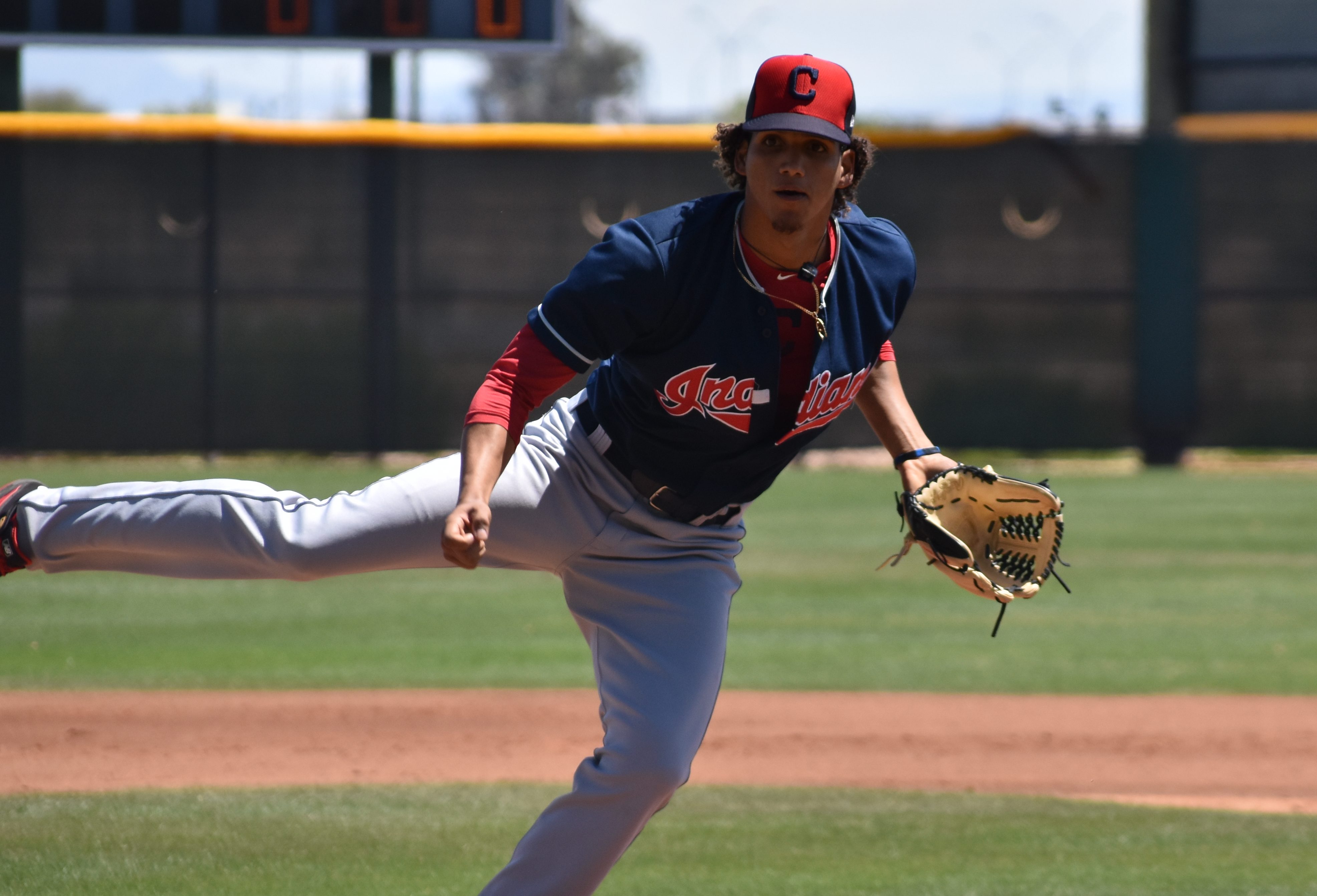 The look back at the Indians White team of 2019 extended spring could essentially be considered a look forward to the 2019 Mahoning Valley Scrappers. Included in this group were many of those who played for the Scrappers last season or were a part of the extremely successful AZL Indians teams. If their success last year and this spring is any indicator, it could be a very fun season for the Scrappers.

Any conversation of this group needs to start with superstar short stop Brayan Rocchio. He lead all extended spring training players in doubles in games I attended with four in eleven games and he stole four bases as well. Rocchio is the top defensive player at this level and can play second or short at an elite level. One of the only things holding Rocchio back at this point is the fact that he just turned 18 in January.

To Rocchio’s right, third baseman Jonathan Lopez has turned into a fine defender in his fourth season with Cleveland, but has still not developed greatly as a hitter. In the 12 games I saw him play, he went 3 for 27 in extended with two doubles. He has a great walk rate and a decent strike out rate, but doesn’t drive the ball in any considerable manner.

The other primary 3B/SS/2B for this team, Raynel Delgado, also struggled offensively and a bit on defense. Delgado had a great offensive season last year for the AZL Indians 2, although his one detriment was a lack of power.

Cooper takes off for first after contact during a 2019 extended spring training game. – Joseph Coblitz, BurningRiverBaseball

On the other side, both first basemen had great offensive springs. Both Michael Cooper and Jonathan Engelmann had short cameos with the Scrappers last year after solid seasons in the Arizona League. Cooper hit his first home run of the spring late in the season, but still slugged .462 in the 11 games I saw him play. Engelmann was a right fielder last year, but was used at first this spring. After missing the early part of the season, he was incredibly consistent over the last few weeks and should be one of the first players promoted to Lake County.

It seemed that  each outfielder on team White ended up performing beyond expectations. To start in the negative, Johnathan Rodriguez has been an extremely well thought of prospect by those who haven’t seen him play since he was drafted in 2017, but he had another rough spring and I wouldn’t say that I’m confident about his potential move to Mahoning Valley.

Ronny Dominguez, on the other hand, has never had any prospect clout and played poorly last year in the AZL, but had a very exciting spring and was one of the best power hitters on the squad. Dominguez is a bit older (21 compared to Rodriguez at 19), but he has improved his stock and could now stick around for a few more years after being on the edge of being cut coming into this season.

Pedro Alfonseca is also 21, but has had multiple set backs due to injuries. He had a fantastic spring offensively and will probably surprise many in Mahoning Valley now that he is completely healthy. The other primary outfielder, Billy Wilson, had a bit of a setback in terms of production, but racked up a ton of walks and is still an elite base stealer and defender.

Of the three primary catchers for team White, two are worth talking about. First, Yainer Diaz continued his great play from last season’s AZL through this spring and is giving some hope to depth at the position for the Indians. He is a good defender and a very solid bat that should be able to stick around as a catcher. The other worth note is Jason Rodriguez, although this is possibly due to the fact that he’s 24 years old and playing against teenagers. Rodriguez’s advanced development made him a danger to all opposing base runners as he not only was good at catching them stealing, but wasn’t afraid to attempt a pick off or two. His great arm saved many pitchers this spring.

Offensively, he also looked better than ever before. His patience and ability to work deep into the count was something I hadn’t seen from Rodriguez before. This skill set could make him one of the Indians better catchers in high A, but the fact that he will likely start the regular season with Mahoning Valley means he probably won’t be with the franchise much longer.

Before we wrap up this final look back at the 2019 extended spring season, we need to look at three high velocity pitchers. Nearing triple digits, reliever Luis Valdez struck out six in the 3.1 innings I saw him throw and was generally unhittable. Luis Sanchez doesn’t throw quite as hard, but struck out four in 2.1 perfect innings in relief.

Finally, there is Carlos Vargas. Considered one of the Indians top young pitching prospects, I saw Vargas make two starts this spring and allow two earned runs over 7.1 innings. While he was still throwing in the high 90’s, he was nowhere near as effective as he was at the end of 2018 with the AZL Indians. He will probably have a good season in Mahoning Valley, but it wouldn’t hurt him to play another partial season in Arizona.