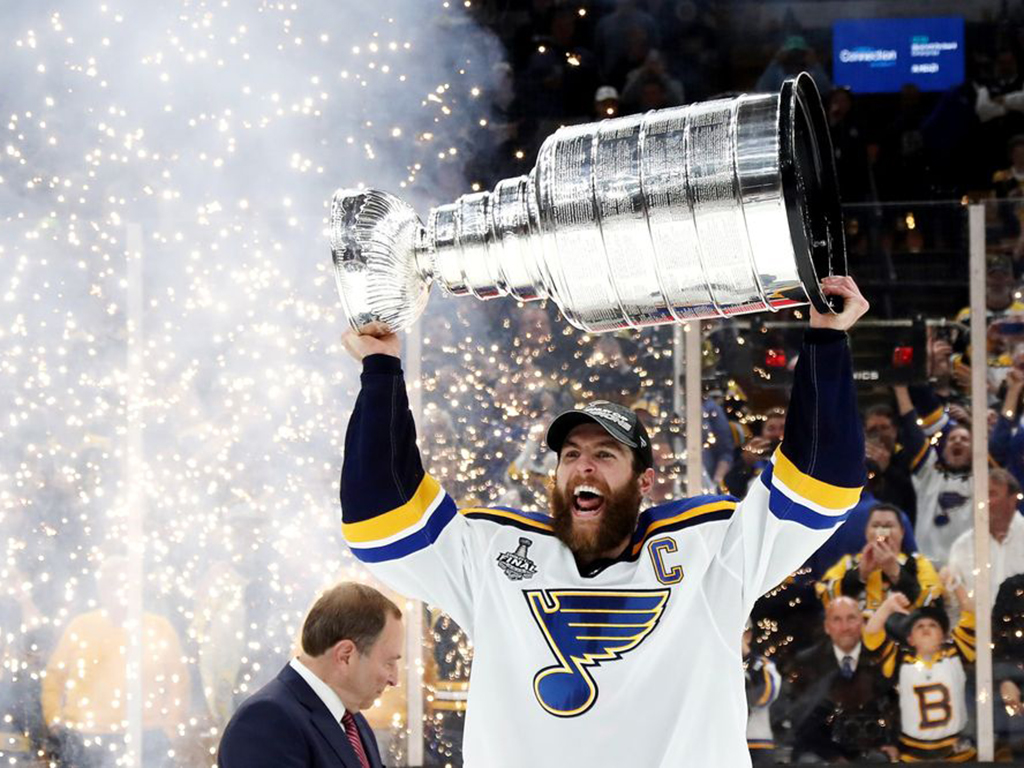 Hello, National Hockey League General Managers, it is I, your friendly neighborhood blogger.

As your friendly neighborhood blogger, I’m here with a request. As a matter of fact, I’m actually begging you of something.

PLEASE do not learn the complete wrong lesson from this Stanley Cup Final and the subsequent championship.

Yes, the St. Louis Blues are a “big team” but they aren’t what you Hockey Men think “big” means.

They don’t just hit for the sake of hitting. They aren’t slow and they sure as hell didn’t need to fight …well, except each other in practice that one time.

Anyway, let’s check out a little film and see if the Blues were actually a “big” team.

The goal begins with Tarasenko not only sending an unrealistic pass to Schwartz but also using his speed to blow past Brad Marchand.

Schwartz then notices Chara is closing the gap and taking away any return passing lane to Tarasenko so he makes the smart decision and puts it on the net – a pass off the pads, if you will – and as we mentioned above, Tarasenko is WAY faster than Marchand and plays this to his advantage to get the rebound, take a moment and flick it past Rask.

VERDICT: This had everything to do with speed and skill. A big defenseman didn’t jar the puck loose, Tarasenko won a race to a loose puck and used his blistering speed to separate himself from a backchecker.

Pretty simple play here, shot from the point, redirected, Rask can’t find it in time, O’Reilly wraps it around the net and tucks it in.

Here’s where we can say the Blues are a “big” team. Throughout the series, their bigger players used their size to create traffic in front of Rask, leading to tips, deflections and second chance opportunities.

Sanford gets a piece of the puck before Rask makes the save, but because he deflects it in front of Rask, it’s a tougher save, meaning he can’t trap the puck. O’Reilly swarms the rebound and makes no mistake.

Sanford used his 6’4” frame to get in front of Rask and make life difficult for him, a trend throughout the series.

VERDICT: Size certainly helped here, Sanford being north of six-feet tall was used to his advantage to screen Rask using both his size and the jockeying for position with Carlo.

You didn’t think this blog would happen without a little schadenfreude, did ya?

This really has nothing to do with size or skill but a hysterical defensive lapse by the Bruins, which we can all agree is both good and productive for society as a whole.

We gotta talk about the unreal awareness by Schwartz in this goal; he sees Schenn streaking down the boards, but notices his defenseman, Pietrangelo is largely uncovered. He lifts Clifton’s stick, let’s the puck go to Pietrangelo and because all five Bruins are largely focused on his shot, they lose track of Tarasenko and he’s free to sneak in and bury a rebound.

VERDICT: @ every other NHL team, maybe don’t give Tarasenko a day and a half in the slot.

I’ll leave true film breakdowns to people like Geoff and Jesse, but if there’s one thing that needs a deep dive from not just the series, but the Blues entire run in general, is that this team had an absolutely RELENTLESS forecheck.

We see it here: Pietrangelo throws a cross-ice dump into the corner because he knows Sanford can win the race to the puck and he does. Then, he gets body positioning on McAvoy, sails a pass to O’Reilly, albeit it’s a blind backhand hope pass but when it works it works, and O’Reilly again, makes no mistake.

VERDICT: Yeah, Sanford’s big, but he’s quick. He’s also got some hands. His speed and vision led to a wide-open chance for the eventual Conn Smythe winner to bury and he did.

(Yes, it was because Marchand decided to change with like 11 seconds to go as the Blues were on a rush, but let’s put that aside, shall we?)

Schwartz goes back to the old days of hockey here, he chips the puck past Marchand who then completely quits on the play, leaving McAvoy out to dry. Pietrangelo then sneaks into a soft area where Schwartz can get him the puck with an open lane to the net and he goes, to quote ole Edzo, forehand-backhand-top cheese.

Here’s what I’m asking you, NHL general managers: Actually watch the film from this final. Don’t just listen to Brian Burke, Don Cherry and every other talking head that’s going to say “big boy hockey is back” because of a “big team” like St. Louis won the Stanley Cup.

While there is absolutely no disputing that the Blues have a blue line with some big bodies, they in large part can make a good first pass and get the puck to the net with regularity. A lot of St. Louis’ offense in the final was from a hard forecheck (with a purpose, not just hitting for hitting’s sake), working the puck to the point and getting screened shots to the net for rebounds and deflections.

That’s certainly a big form of hockey, but the guys up front need to be able to get the puck, control the puck and work the puck to the point cleanly, which most of them could.

Sure, St. Louis was big, but if you slept on their skill, you were willfully ignoring it to serve a narrative you wanted to be true.