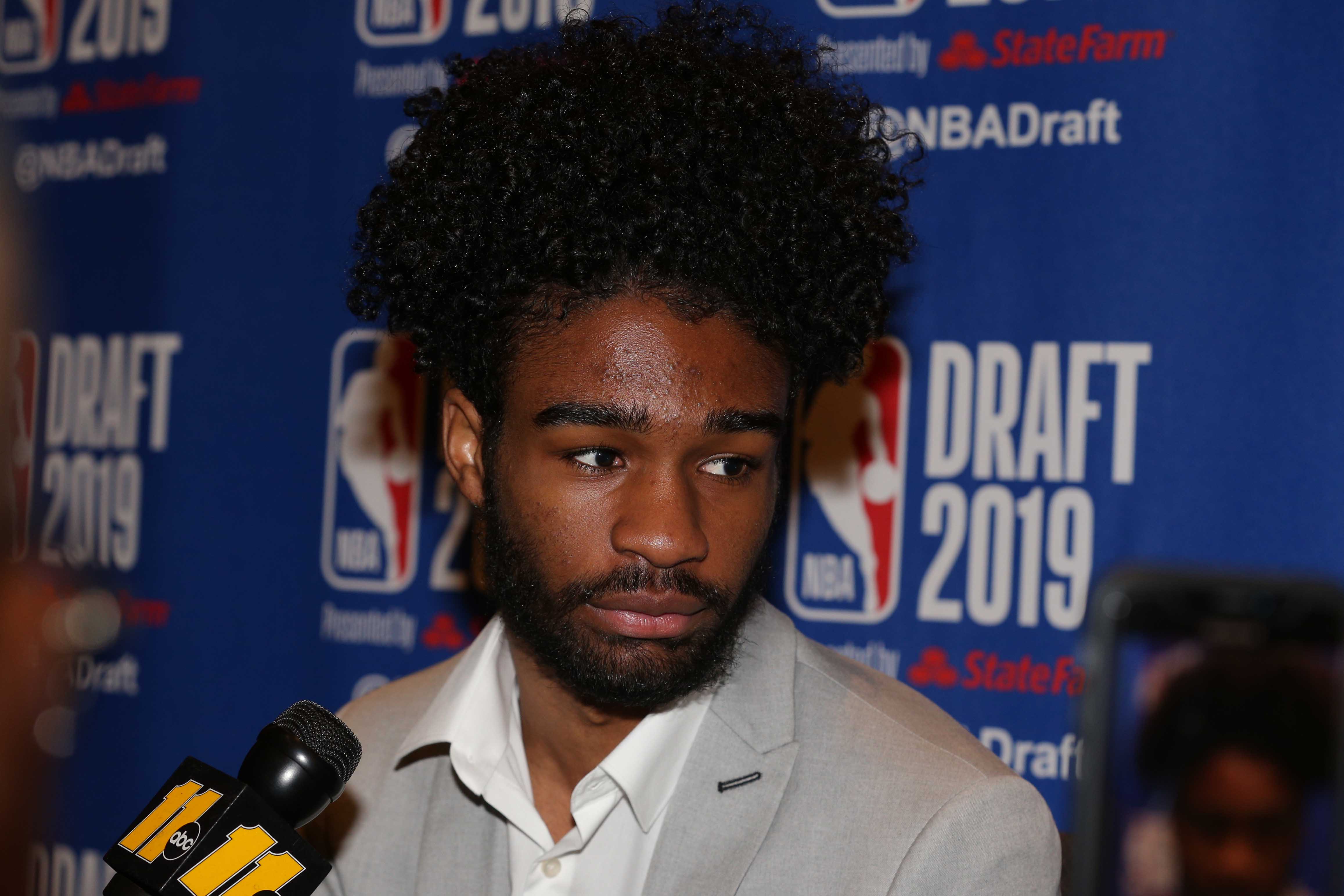 We are just one day away from the 2019 NBA Draft. It will be the first of hopefully many drafts that Gersson Rosas will command. At his pre-draft press conference yesterday, Rosas was pretty frank: the Timberwolves are trying to do everything in their power to bring in high-level talent to put around Karl-Anthony Towns. Rosas said that the Wolves have talked to every team in the league about the possibility of moving up, down, or out of the first round tomorrow night. With that said, I will be going through Minnesota Timberwolves Draft Targets for each of these scenarios: trading up, trading down, and staying at pick 11.

ESPN first reported the rumors of Minnesota’s interest in moving up to the fourth pick with their eyes on Darius Garland. Garland played just five games at Vanderbilt last season, but he has been considered the #4 prospect by many scouts and experts this summer. There are also rumors that some scouts would even have him ranked higher than Ja Morant if he was able to play a full season last year. For me, I am a little lower on Garland. I have him slotted at #7 on my 2019 NBA Draft Big Board.

Garland is a shifty guard with a great handle and a smooth stroke. His ability to knock down deep shots off the dribble and in spot-up situations was evident in his short time at Vanderbilt. One big concern for Garland has been his finishing ability and some of his shot selection. As a 6’3” point guard, Garland still needs to add strength to allow himself to attack bigger defenders at the rim. He is not as quick or explosive at the rim as someone like De’Aaron Fox, who has a similar build to Garland. Also related to his strength, Garland can be overwhelmed when he is blitzed coming off a pick-and-roll. If a defender shows a strong hedge off a screen, Garland needs to improve at splitting the defense or backing out and finding an open man.

Garland has the skill set to be a great NBA point guard. With Minnesota in need for a future guard, Garland would check most of the boxes. He is still young, and he would take time to develop, but as Rosas has said, the Wolves will swing for the fences trying to find All-Star talent.

My two prospects to watch for if the Wolves trade up are both point guards and for good reason. The Wolves need a perimeter creator, who can get others involved and be a primary scoring option. Coby White has the ability to do both. As the #6 player on my 2019 NBA Draft Big Board, White’s size and offensive versatility would make him a great fit alongside Karl-Anthony Towns.

Coby White was not afraid to make defenses pay for going under the screen at North Carolina. White shot over 35% from three in college, which should translate well to the NBA with his smooth stroke. At North Carolina, White did most of his damage in the pick-and-roll. Running a pick-and-roll with Karl-Anthony Towns in the NBA is something Wolves fans might only be able to dream about. Off the pick-and-roll, White does a great job at using his size to get into the paint and finish over smaller defenders. While he is not the most polished point guard in the draft in terms of passing, that is something he can develop into as time goes on. White would benefit from playing with another playmaker right away in the NBA until he develops into a more fluent passer. Can Andrew Wiggins fit into that role?

The Wolves might have to trade up one or two spots if they want to grab Sekou Doumbouya. But, because of how unpredictable draft night is, for the purpose of this article, we will have him as an option at 11. Doumbouya is the top international prospect in the draft, with great physical tools, including a 6’11” wingspan.

Doumbouya is still raw, but his game looks oddly similar to Pascal Siakam. Doumbouya likes to get out into transition, using his size and speed to beat players up the floor and finish at the rim. His shot will be a work in progress with a slight dip in his release, but the form is mostly compact with great touch. In order to take his game to the next level, Doumbouya will need to work on his handle. Doumbouya has shown that his body moves faster than his handle in transition, which has caused some fumbling of the ball, which would be taken advantage of in the NBA.

As a fit on the Wolves, Doumbouya would likely start out as the backup four, with the potential to eventually start alongside Towns in the frontcourt. As a fast-paced player with defensive versatility, Doumbouya could be a steal if he is still available when Minnesota is on the clock.

Sekou Doumbouya knocking down 15 threes in a row with close to 10 general managers on hand. Doumbouya certainly showed his talent during the 45-minute workout. 6-10 versatile athlete with skill potential. pic.twitter.com/qGZliNiV7S

PJ Washington has been flying up draft projections in the recent week, and I think it is for good reason. Ranked as my #13 prospect, Washington projects as a future starting four. During his sophomore season at Kentucky, Washington showed improvement on his shooting and his rebounding. Washington increased his three-point percentage from 23.8% to 42.3% last year. While I do not see him as a knock-down shooter right away in the NBA, the touch and mechanics are there for him to be a modern stretch four in years to come.

Along with his offensive game, Washington will be a versatile defender in the NBA. He lacks some speed and athleticism, but that should not take away his ability to guard 2-4 in the NBA. While his fit on the Wolves would be best next to Karl-Anthony Towns, allowing Washington to further develop his shooting will be key. Right now, he is a good shooter but still likes to hang around in the painted area, using his hook shot at a high volume. Related to his smaller size for a four in the NBA, Washington might not be able to get that shot as often as he would like at the next level. Spacing will be crucial around Karl-Anthony Towns, which is why Washington will need to solidify his shot.

Nickeil Alexander-Walker (NAW) is one of my sleepers for tomorrow night. With a long, lengthy frame, NAW has great size for the point guard position. Adding more strength will give him the ability to be a versatile defender in the NBA, potentially being able to guard 1-3. NAW has one of the quirkiest releases on his shot in the draft, as it looks like a slingshot coming out of his hands. Nevertheless, he knocked down 37.4% of his threes last season.

As a passer, NAW is a work in progress, but he has shown flashes. His speed and quickness will not floor anyone, which makes his basketball IQ and ability to find passing lanes all the more important. As my #12 ranked prospect in this year’s draft, NAW projects to be a Spencer Dinwiddie type of player with high IQ and great instincts on both ends of the floor.

Coming in and starting at point guard for the Wolves may not be what NAW is ready for, but if he is given a year as a backup, playing behind Jeff Teague, that will do him wonders. He could have the ability to break out, much like Shai Gilgeous-Alexander did last year with the Clippers.

While I am not as high on Tyler Herro as others, his shooting would still benefit the Wolves spacing next season. Shooting is at a premium in the modern NBA and Herro’s ability to hunt his shot will make him a sought after prospect tomorrow night. My main concern with Herro is his inconsistency. There were nine games last season where Herro did not make a single three. That kind of inconsistency makes me nervous for a guy known as a shooter.

Herro is a sneaky athlete who gives his full effort on the defensive side of the ball, but that is not his bread and butter. Herro will be an off-the-ball player in the NBA, running around screens like J.J. Redick. Here is to hoping he can hit the shots like Redick and not turn into a year-one Grayson Allen, who could not find his way on the court. The fit in Minnesota is almost exclusively due to floor spacing and shooting. The Wolves need guys that can knock down three-pointers, but Herro lacks a tremendously high ceiling, which is why I would only take him if the Wolves move down and have two first-round picks tomorrow night.

Bol Bol conducted a Pro Day in LA yesterday in front of approximately a dozen NBA teams, including five GMs, to ease concerns around his health and remind them of his ultra high skill-level. Bol showed why he's considered a top-five talent in this draft in terms of pure upside. pic.twitter.com/GSPF6W3FYL

It is shaping up to be a fun night tomorrow, with the Wolves in the middle of a lot of trade rumblings. If the Wolves find a way to trade up to get Darius Garland or Coby White, that would be my ideal scenario. If not, I would try to move back with Boston to get #14 and #20, to take some combination of NAW/Bol/Langford/Herro/Little.