Good Times in Goodyear Red: Going for a Walk 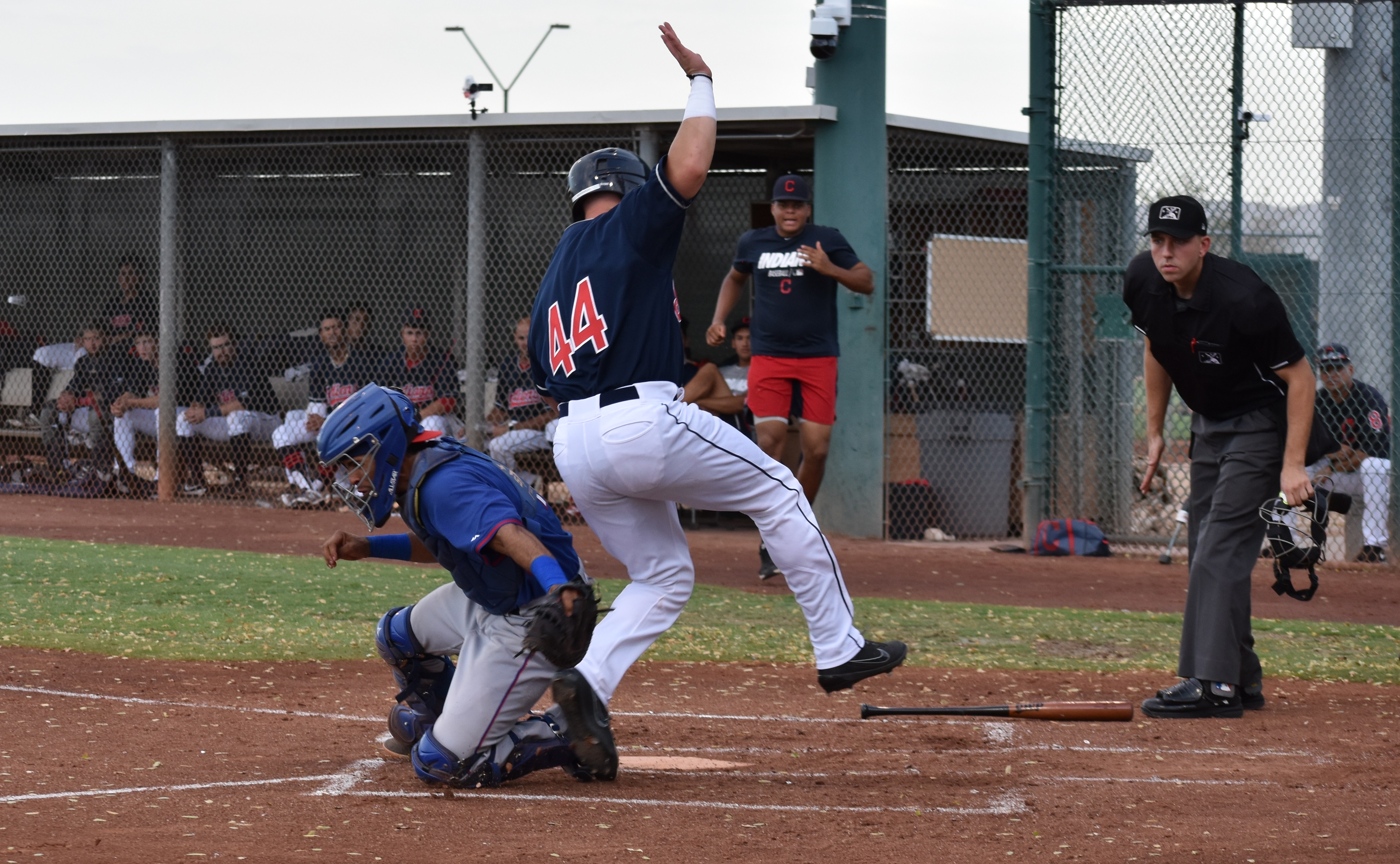 Good Times in Goodyear Red: Going for a Walk

Indians Red took a tough loss to begin the week dropping one 11-1 to the AZL Mariners. While there weren’t many notable performances beyond the back end of the bullpen, Allen Hernandez and Luis Peguero, this was the first career game for Zach Weatherford. Weatherford was born in Englewood, Ohio and attended Wright State in Dayton, but went undrafted.

In addition to the local angle, Weatherford was considered the top center fielder in all of D1 baseball last year and was awarded the Rawlings Gold Glove. He also hit well in his senior year with a .343/.415/.546 batting line. Signed as an undrafted free agent, Weatherford went 0 for his first 7, but took two walks in his third game against the Rangers.

After an off day on Sunday, team Red managed to score five on Monday without an RBI to beat the Cubs 1 5-1. Five errors by Chicago gave the Indians the offensive edge, but the Red pitching staff was absolutely incredible. Daniel Espino started and struck out five in three innings with just one walk allowed. On rehab assignment, Francisco Perez went another three hitless, scoreless innings. Christophers Santana allowed the only hit and only run of the night in the 7th, then Kevin Coulter struck out two in two more shut out innings. In the end, the entire Cubs offense equaled the solo home run by Yovanny Cuevas.

Miguel Vinicio had another solid start on Tuesday, going four innings and allowing one unearned run. His effort was marred, however, by nine runs allowed by two pitchers and poor defense over the next three innings. In general, the Athletics Gold kept the offense down, but Joe Naranjo hit his first career triple, knocked in a run and scored another.

Pena stands at the plate during the 2019 season. – Joseph Coblitz, BurningRiverBaseball

While we generally talk about the Indians players on rehab assignment, on August 8th, the Rangers brought the most interesting player as 36 year old Edinson Volquez made the start. Volquez was signed to a $2M deal after not pitching at all in 2018. He began the season in the big leagues in 2019 with the Rangers, but made just two starts before hitting the 60 day IL. Now he is working his way back in hopes of being in the Texas bullpen to end the season.

While Indians Red couldn’t get anything going in the inning Volquez pitched, they took apart the rest of the Texas staff for 12 runs on six hits. This may seem odd, but the Indians worked 12 walks as well with Landy Pena leading the way with three. Every starter reached base at least one and only two didn’t score. Jean Montero hit a two run triple and lead the way with three runs scored as the number nine hitter.

Arguably the fastest player on the team, this was just Montero’s first triple, but he does have 19 steals in 21 attempts. The triple gave Montero hits in three straight games after hitting safely just three times in his last ten games.

Munoz throws a pitch while making a start for Indians Red during the 2019 season. – Joseph Coblitz, BurningRiverBaseball

It was a rough night for the Indians pitching staff as well as they walked nine, although they also struck out 17. Braunny Munoz had the best night of the bunch as he started and allowed one earned run over three innings while striking out five.

Juan Zapata had a fair night to end the week against Dodgers Mota on Thursday as he allowed two runs in five innings, but Gallagher wasn’t as sharp in this rehab appearance and it cost the team the win. He started off the sixth with a walk, then allowed three straight hits leading to four runs in the inning.

The middle of the Indians line-up provided most of the pop on their side as Gabriel scored and knocked in a run, Will Bartlett hit two doubles, knocked in and scored a run and Yordys Valdes had two singles, stole a base and knocked in a run. Overall, team Red walked six times in addition to their eight hits, but scored just three runs

While he didn’t have any particularly outstanding games, Micael Ramirez has been solid since his return from the IL. He has played in six games, starting as a DH and slowly working into more time behind the plate. Despite having just two or three plate appearances in most games, he has a six game hit streak, although has not had a multi-hit game to this point. Ramirez is one of few players left behind from the 2018 AZL teams and could be promoted quickly once he gets back to full speed.

Third round pick Joe Naranjo had a great approach at the plate out of the gate, but didn’t have results that one would expect from such an approach. This has changed of late as he has hit .296/.367/.367 since July 1st (25 games). Incredibly, he has reached in 26 of his last 27 games, taking his only true 0 for on July 31st against Brewers Blue.

Like Naranjo, Will Bartlett showed an advanced bat from the beginning, but his period of struggle didn’t come until later in the season. After a strong start, a 6 for 48 spell from June 26th through July 19th really killed his season stats. Since then, however, he has hit .389/.465/.472 and he ended this week with three straight multi-hit games. Both Naranjo and Bartlett are primarily first basemen, but neither have the power profile you would generally expect from the position. Naranjo is the better defender of the two, so Bartlett has also played some in left field where he has been acceptable defensively.