Tena Brings the Indians a Bit of Everything up the Middle 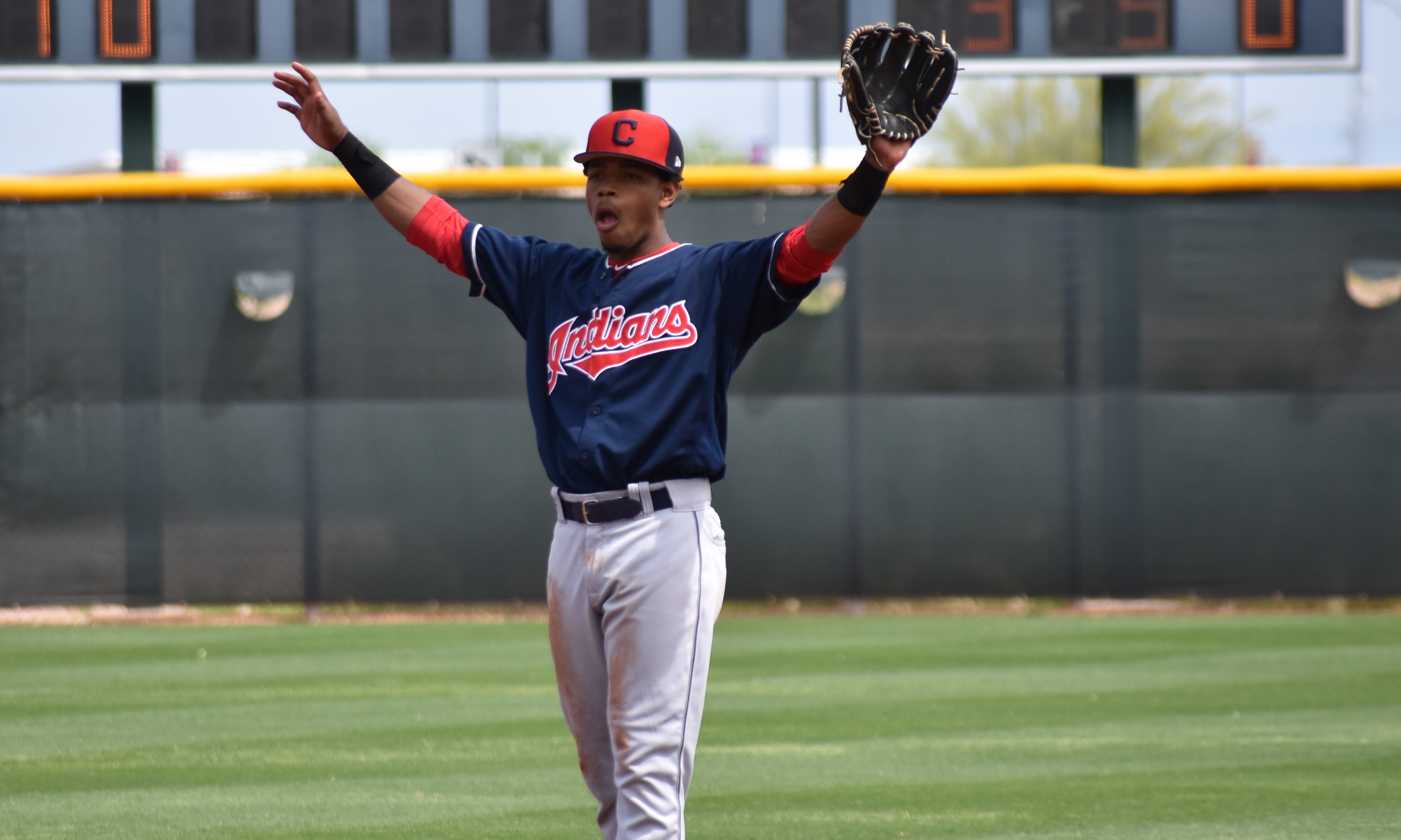 Tena Brings the Indians a Bit of Everything up the Middle

The Indians made a huge splash in the international market in 2017 after completely revamping their international scouting group. By now, many have seen the early results of that class as top players George Valera and Aaron Bracho have both moved up to Mahoning Valley (Valera ending the season with Lake County). This pair signed for nearly $3M between them, but many of the smaller signings from that class have already stood out as well, including Brayan Rocchio, Jhonkensy Noel and Alexfri Planez.

As much talent as exists in that group of names, one that can’t be forgotten is middle infielder Jose Tena. Tena signed for just $400,000 in 2017 out of San Cristobal, Dominican Republic and, like Noel and Planez, started his career in the Dominican Summer League rather than the Arizona League. Numbers can be very sketchy out of the Dominican as an extremely large amount of poor players are often dominated by the few average or above average players. Because of this, we can look at Tena’s .313/.367/.410 batting line as proof that he wasn’t one of the worst without real evidence if he was one of the best. Defense is also nearly impossible to judge, although Tena’s fielding percentage and range factor would hint that he was a good second baseman and average short stop.

I first saw Tena in 2018 minor league spring training prior to his heading to the Dominican. While I didn’t get enough of a look then to see anything other than that he has quick hands at second, he played extensively in extended spring in 2019, then the full season in Arizona.

During extended, Tena hit for an extremely high average, but almost never walked, struck out or hit for power. He has a very quick bat and a ground ball/line drive approach at the plate that allows him to make good use of his speed. Once Planez broke his hamate bone, there was certainly an argument that Tena was the fastest player in Arizona for the Indians. There is already poor defense in the AZL and that is even worse in extended and Tena took perfect advantage. This is not necessarily a recipe for success after the rookie level, but it made his early numbers look pretty anyway.

Tena rolls into second against the Reds in a 2019 AZL Indians Blue game. – Joseph Coblitz, BurningRiverBaseball

Things were very different once the official play started in the AZL. Tena elevated his swing, leading to a huge increase in strike outs, but also a huge increase in power. A pure lefty at the plate, Tena sprayed balls to all fields (his spray chart from Baseball Savant can be seen below) with his only home run coming down the left field line.

In the end, he played 44 regular season games for Indians Blue and hit .325/.352/.440. His strike out rate jumped from 13.3% in his rookie DSL season to 22.1% in Arizona while his walk rate fell from 6.9% to 3.0%. There’s no question that Tena brought a ton of value to the Indians through his bat alone, but this extremely high ratio of strike outs to walks hurt his overall contribution and he finished with just a 115 wRC+.

Following the regular season, the Indians Blue made it all the way to the championship round against the AZL Rangers where they were swept in two games. One of the few great offensive performers during these four post-season games, however, was Tena. Against A’s Gold he added his second home run of the season to lead off the 6th with his fellow 2017 signer Noel adding another solo shot two batters later to put away Oakland.

Noel had a single in the third in the first game as well, then came through with three hits against Padres 2 the following night in Peoria. Tena had just three games with three hits during the regular season, all against lesser foes, so to do so against the top team in the west valley was very impressive. Following his 3 for 5 effort with one run and one RBI, Tena was pulled from the game to give the Padres a break.

While Tena was picked off after his first hit, his fourth inning appearance was a microcosm of what he brings to the line-up. After being safe on an error by the first baseman, he took third on a wild pitch, then stole home on a Noel strike out. Officially, Tena was out and stole a base. In reality, he created a run all by himself by putting the ball in play and running the bases extremely aggressively. This wasn’t a straight steal of home, however, but it did give Cristopher Cespedes a chance to grab himself a rare steal as he began the play by taking second.

While the Indians Blue offense was almost completely shut down in the two game championship series, Tena came through with a hit in each game, extending his season ending hitting streak to six games including four multi-hit games. I did mention that he didn’t have many three hit games, but he did have quite a few multi-hit affairs. From July 19th on, he rapped out a 19 game hitting streak that included 12 multi-hit games and he had 21 overall in the regular season. When you hit the ball as hard and as often as Tena does, quite a few of them are going to fall in for hits.

Looking at the other aspects of Tena’s game, while he is an extremely speedy and aggressive base runner, he didn’t steal many bases outright in 2019. He was intelligent and a bit cautious in consideration of straight steals, but was always quick to take an extra base on a hit or anything that got away from the catcher at all. This is huge in the Arizona League, where that happens all the time, but could be evidence that his steal numbers will rise once he becomes more comfortable with the pitchers in the league.

The thing that could really send Tena to the top, however, is his defense. He has great range, a strong arm, a good glove and quick hands, but sometimes his concentration fails him. After playing both short and second fairly equally earlier in his career, he spent essentially the entire season in 2019 at short stop. There, he committed two errors in his first 12 games, then four in his next five. After having a generally solid season defensively, he allowed five more errors across the span of seven games in mid-August. He had plenty of excuses if he wanted them: it was essentially 115° at first pitch every night; the field conditions were poor with only a couple teams using big league ballparks this year; when considering extended spring this was his longest season ever.

Tena pulls a ball down the line during a 2019 AZL Indians Blue game. – Joseph Coblitz, BurningRiverBaseball

In any event, once that period ended, he wrapped up the season on a strong point defensively with some of the best plays of the season. He proved himself to be ready for the next level in 2020, so all those issues should be alleviated whether he heads to Mahoning Valley or Lake County.

While he will be just 19 when next season starts, I personally think he is ready for Lake County. It would be entirely understandable if the Indians keep him down in Arizona until Mahoning Valley starts up, however, as Rocchio and Bracho look to have the 2020 Captains middle infield locked down and Tena should continue to start rather than ride the bench in the minors.

No matter where he ends up, Tena represents part of the most talented group of middle infielders I’ve ever seen in a minor league system. From Tyler Freeman and Jose Fermin down to Bracho, Rocchio, the Indians have a incredible amount of potential Major Leaguers from Lynchburg down. Without even looking at the big signings coming after (like Gabriel Rodriguez, Angel Martinez and Junior Sanquintin), add Marcos Gonzalez and Richie Palacios to that group of 2B/SS and there is going to be a ton of internal competition in the Indians system in 2020 and beyond.