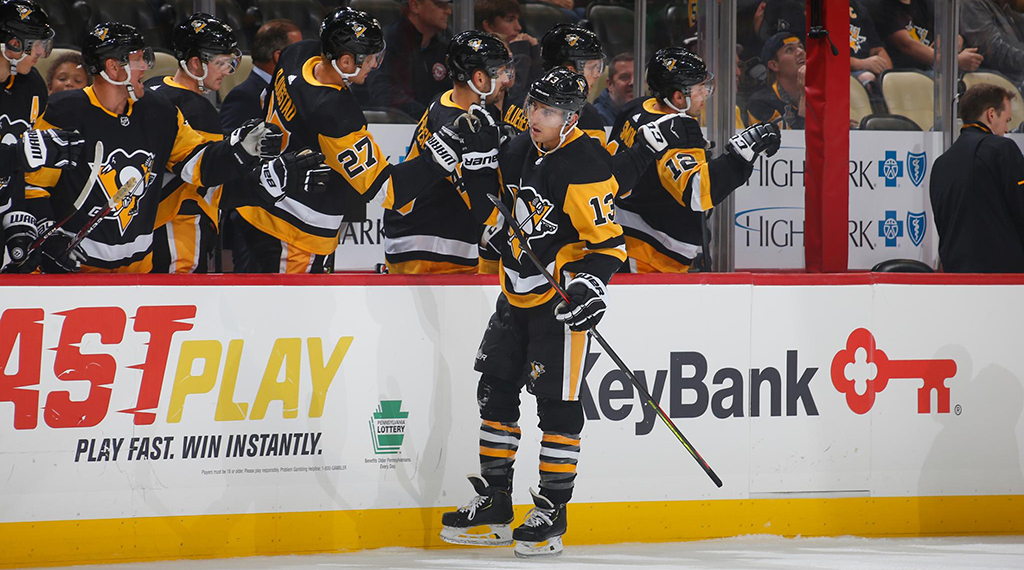 One more to go.

One more and you can finally stop asking #IsItOctoberYet? Check a calendar, you stooges. It’s not.

One more and there’s no more “Hey, is this on AT&T Sportsnet/NHL Network/The Internets?”

This was streamed on a radio-scoreboard simulcast so, I’ll be honest with you – I tapped out after the first period.

You see that defense? Look at it. Cherish it. Remember it………..because it won’t be that way come game 1/82. Don’t fool yourself.

If Jack Johnson is traded, tremendous, but make no mistake, if he is on payroll once the regular season starts, he will be on the ice.

In other news, during the pregame Phil Boroque referred to Justin Abdelkader and Mike Green as veteran presences. Just your daily reminder that time is fleeting and comes for all of us.

Pens were off and running early. The forecheck was buzzing and it led to a pretty nice goal for newcomer Brandon Tanev.

Guentzel seeing he didn’t have much coming out of the corner made a solid little bank pass off the wall that Schultz would receive in stride, step into and Tanev would deflect past Jonathan Bernier.

Smart shot by Schultz, putting it diagonally for a tip and Tanev getting a stick on it. Just how you draw it up.

This would be a theme of the night, the Pens getting to the net and making life difficult for Bernier.

I also don’t think Guentzel-Tanev-Sid would be a bad line. Don’t worry, Jeff will have some breakdown on Tanev coming soon.

Nice tip by Tanev while getting knocked down in front.

The Pens would keep up the forecheck most of the first period until Sid found himself bad-leadering himself into the penalty box.

Sid would slash Mike Green, who again is still in the league, and head off. The Pens would kill off the penalty, but while Sid was coming out of the box, Ryan Kuffner (an NHL 20 Be A GM player that EA generates after 7 seasons) would send a wrist shot to the net from the sideboards that eluded Matt Murray’s blocker and go in.

Seeing-eye shot, nothing you can do.

Good things happen when you shoot the puck.

That would really be about it for the first period. It’s preseason game five, let’s get this season rolling already.

Penguins controlled this game front to back and the numbers in the first proved that. 60-40 CF%, 7-2 in high-danger chances.

Less than a minute in, it was Bryan Rust tying this one up.

Evgeni Malkin worked the puck up the boards to Schultz, Schultz again sends a puck to the net with the intention of someone getting a stick on it and Rust does just that.

Trusty Rusty with the tally.

Schultz and Malkin with the helpers. pic.twitter.com/oDDqbdsBzp

It was a mostly sleepy second period, not a lot really happened. The Pens had nine shots, the Red Wings had eight.

Just about three minutes remaining, Mike Green again would remind us he’s still in the league.

A shot from Flippula would beat Murr on the short side, hit the post and somehow deflect back in front. Green gloved it down, put it on his stick and had an entire net to shoot at. He didn’t miss.

Just a night of net-crashing.

More even second period, but mostly low-event hockey. Pens with a 52-47 advantage in CF% and each team had one high-danger chance each. Four more periods of preseason to go…

Do you have a moment to speak about Corsi God Dom Simon? Don’t care if you don’t, we’re talking about him.

Two minutes into the final frame, he stayed On Brand for this one and crashed the net.

Zach Aston-Reese makes a Bob Errey Pass Off The Pads, Dom Simon broke to the net and scored a spinning backhand goal into a yawning cage.

I’ll say this much, if the Pens strategy this year is just to go to the net and make life miserable for goalies, I’m here for it.

Not be outdone by literally all of his teammates, Sid got on the board by, you guessed it, crashing the net.

Guentzel would slide a pass to the streaking Crosby, Crosby got a good whack at it and it would sneak five-hole on Bernier.

(it's a long season) pic.twitter.com/SdTyRHrxtr

Pens generated a 12-5 advantage in high-danger chances, again, going to the net, it’s what you gotta do to score. They also held the Corsi advantage all night. 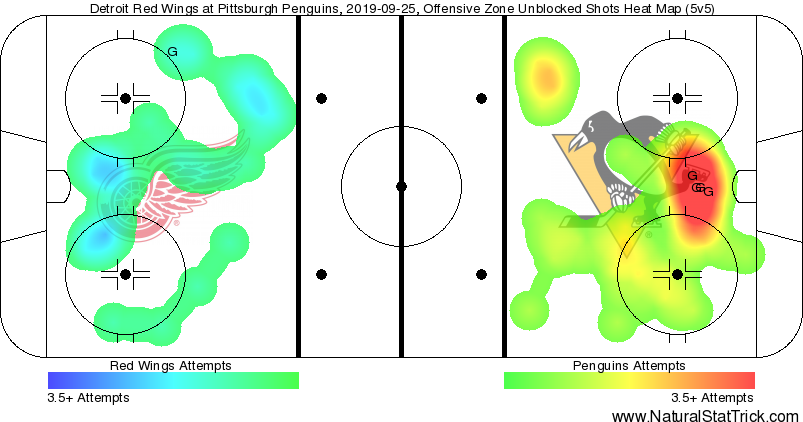 Heat map tells the story – Pens crashed the net in the offensive zone and protected the house in front of their own net. Weird how when a guy who can’t move the puck and just posts up in front of his own goalie is out of the lineup that happens.

The swath of red in front of the net for the Penguins at 5v5 is crucial. Goalies are unrealistic these days. Shots from far out won’t do much. Get to the cage.