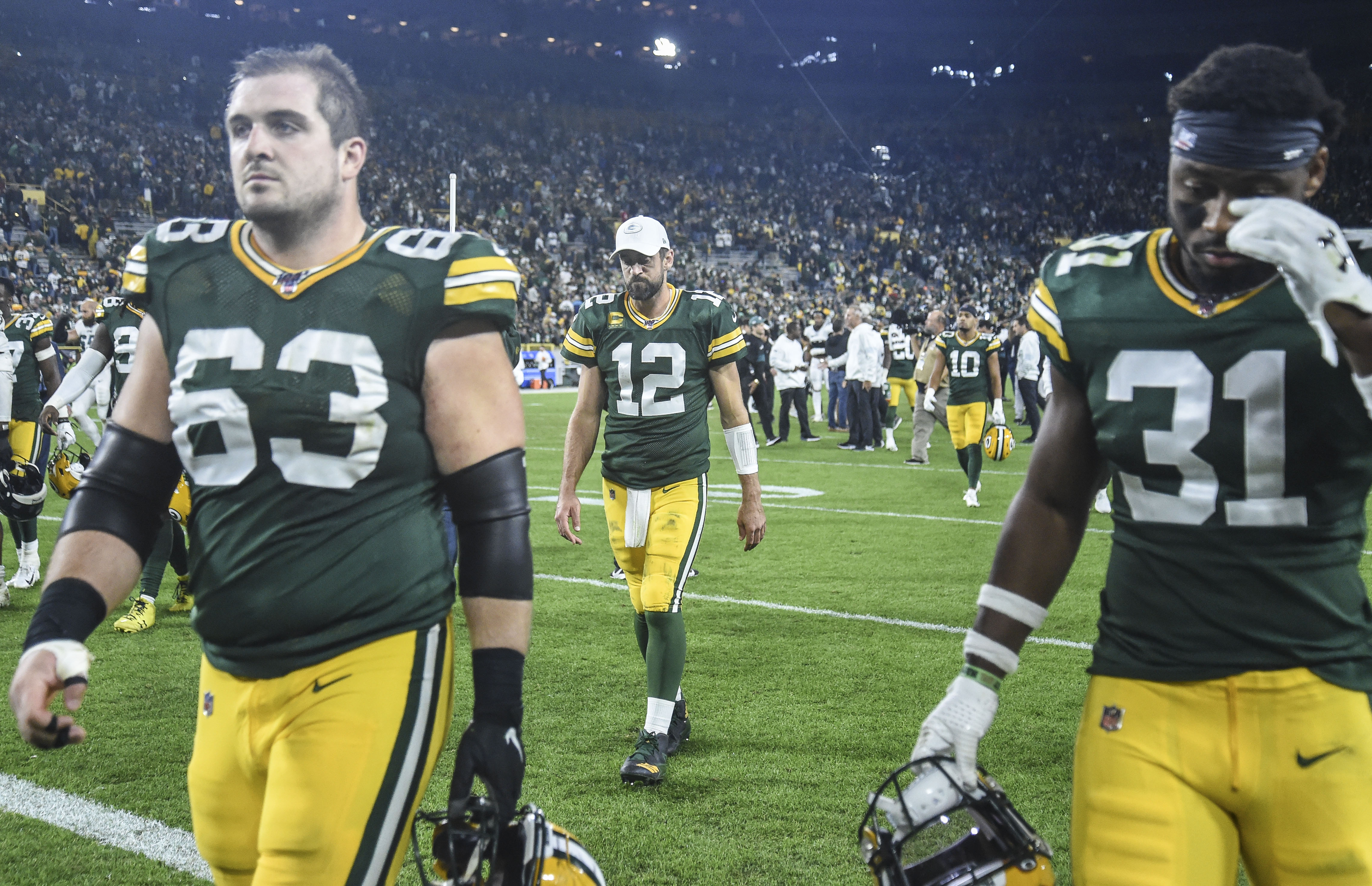 The Green Bay Packers suffered their first defeat of 2019 in a close 34-27 game against the Philadelphia Eagles. The Packers had two chances to score inside the Eagles 10 in the fourth quarter, but the Pack turned the ball over on downs the first time and Aaron Rodgers threw a pick in the end zone in the game’s final minute. The loss drops the Packers to 3-1-0 on the season.

Here are 10 things we learned from the Packers loss to the Eagles:

Davante Adams had a dominant performance. It was clear immediately that the Packers intended to target their top receiver early and often against the Eagles banged up secondary and Adams was more than equal to the task.

He finished the game with 10 catches for 180 yards and would have had a lot more had he not been sidelined by a toe injury in the fourth quarter.

The Packers need Adams healthy after the mini bye because no other receiver on their roster come close to what Adams can do.

For most of this game, we saw what Aaron Rodgers can still do. He was more decisive, ran the ball for key first downs and threw for 422 yards and a pair of scores. The offense had more rhythm than it showed in the first three games even if it was one-dimensional.

There were still some accuracy issues that his receivers helped cover for, but Rodgers certainly played well enough to win the game. Once he gets more comfortable in this offense, we should see some vintage A-Rod.

3. The Packers Couldn’t Stop the Run

The Eagles ran the ball at will against the Green Bay defense, finishing with 176 yards on the ground on 33 carries, an impressive 5.3-yard average. The duo of Jordan Howard and Miles Sanders were both extremely effective and the rushing game gave the Eagles the time and ability to throw the football.

Defensive coordinator Mike Pettine emphasizes stopping the pass first and that’s not a bad strategy, but the defense must do a better job than this stopping the run or Ezekiel Elliott and the Cowboys will have a field day against the Pack next week. Blake Martinez was credited with 15 total tackles in the game but too many of them came after the Eagles gained their yardage.

4. The Packers Couldn’t Run the Football

Sometimes, stats can be deceiving. The Packers finished with 77 yards rushing on 20 attempts which isn’t too terrible, but 46 of those yards came on scrambles by Aaron Rodgers.

The Pack lost Jamaal Williams to injury early in the contest and the Eagles completely shut down Aaron Jones on the ground, holding him to 21 yards on 13 carries for a paltry 1.6-yard average.

Head coach Matt LaFleur stuck with the run a little too long and it cost the Packers some chances to score during the game.

The lack of a running game also forced the Packers to throw the ball four times when they had first-and-goal at the one in the fourth quarter and they failed to score. The offensive line needs to improve its run blocking.

5. The Pass Rush Didn’t Get There Tonight

The Packers did not register a sack against Carson Wentz all game. More importantly, they rarely pressured Wentz at all, giving him plenty of time in the pocket to find his receivers. You cannot allow a talented quarterback like Wentz to have that much time or he’ll pick you apart.

The secondary didn’t play poorly, and Kevin King bounced back and had a good game after a shaky performance in Week 3, but without the pass rush, the defense wasn’t dominant and couldn’t pressure Wentz or force any turnovers. Turnovers and poor special teams play also gave Philadelphia too many short fields. The Packers outgained the Eagles 491-336, but the result was still 34 points allowed and a loss.

Three key players were lost during this game and each one hurt the Packers especially down the stretch. Losing Adams in the fourth quarter meant Rodgers had to try to rally the team late without his top receiver.

Losing Jamaal Williams early limited the rushing attack. Williams may have been a better option to run against the Eagles than Jones was and even if he wasn’t, he would have given the Packers different options on what type of run plays to call.

The Pack also played the second half without RT Bryan Bulaga who had neck or shoulder issues. Alex Light filled in and there was clearly a large drop off at the position. Green Bay’s lack of depth at offensive tackle may be an issue going forward if Bulaga isn’t ready for Week 5.

The fact that the Packers were still able to move the ball as well as they did is a credit to Rodgers and LaFleur.

The Packers special teams had been much better in the first three games but this week they hurt the team again. A long kick return by Sanders woke up the Eagles and gave them momentum when they were trailing 10-0. That was a key turning point in the game.

The Packers also gave the Eagles a short field when Mason Crosby kick off out of bounds and that led to more Eagles points.

In a close game like this, special teams can make a difference and they hurt the Packers in these two key instances.

Wentz completed 16 passes in this game and nearly half of them (seven) went to Ertz. Will Redmond couldn’t cover Ertz consistently, showing how much the Pack misses Raven Greene. Pettine eventually made coverage adjustments, but the damage was done. Ertz only gained 65 yards for the game, but many of his catches were key third-down conversions that kept Eagles drives alive.

Backup tight end Dallas Goedert caught two more passes including a key touchdown in the second quarter that put the Eagles ahead 14-13.

9. The Replay Review Was Costly

There was a controversial replay review that went against the Packers and cost them a key first down early in the third quarter. Rodgers tried to throw to Marquez Valdes-Scantling and he was clearly interfered with on the play with the defender not turning back for the ball, making contact and getting his hands on MVS’ facemask.

LaFleur attempted to review the lack of pass interference but the call stood and the Packers, trailing 21-20, had to punt. The Eagles drove down the field on their next possession and scored a touchdown to take a 27-20 lead.

The failure to overturn the call cost the Packers momentum and eliminated the advantage of receiving the second-half kickoff. Green Bay played catch-up football after that.

10. The Packers Aren’t Getting Consistent Play from Their Other Receivers

Geronimo Allison was a factor in one drive and made two key grabs but was invisible the rest of the night and finished with just three catches. MVS also managed only three receptions on the night. Allen Lazard drew a key pass interference penalty in the end zone but failed to catch a pass.

Keep in mind the receivers were facing an Eagles secondary that was severely compromised by injuries and missing many key players. The Packers were unable to consistently take advantage of that, at least not using their other wide receivers.