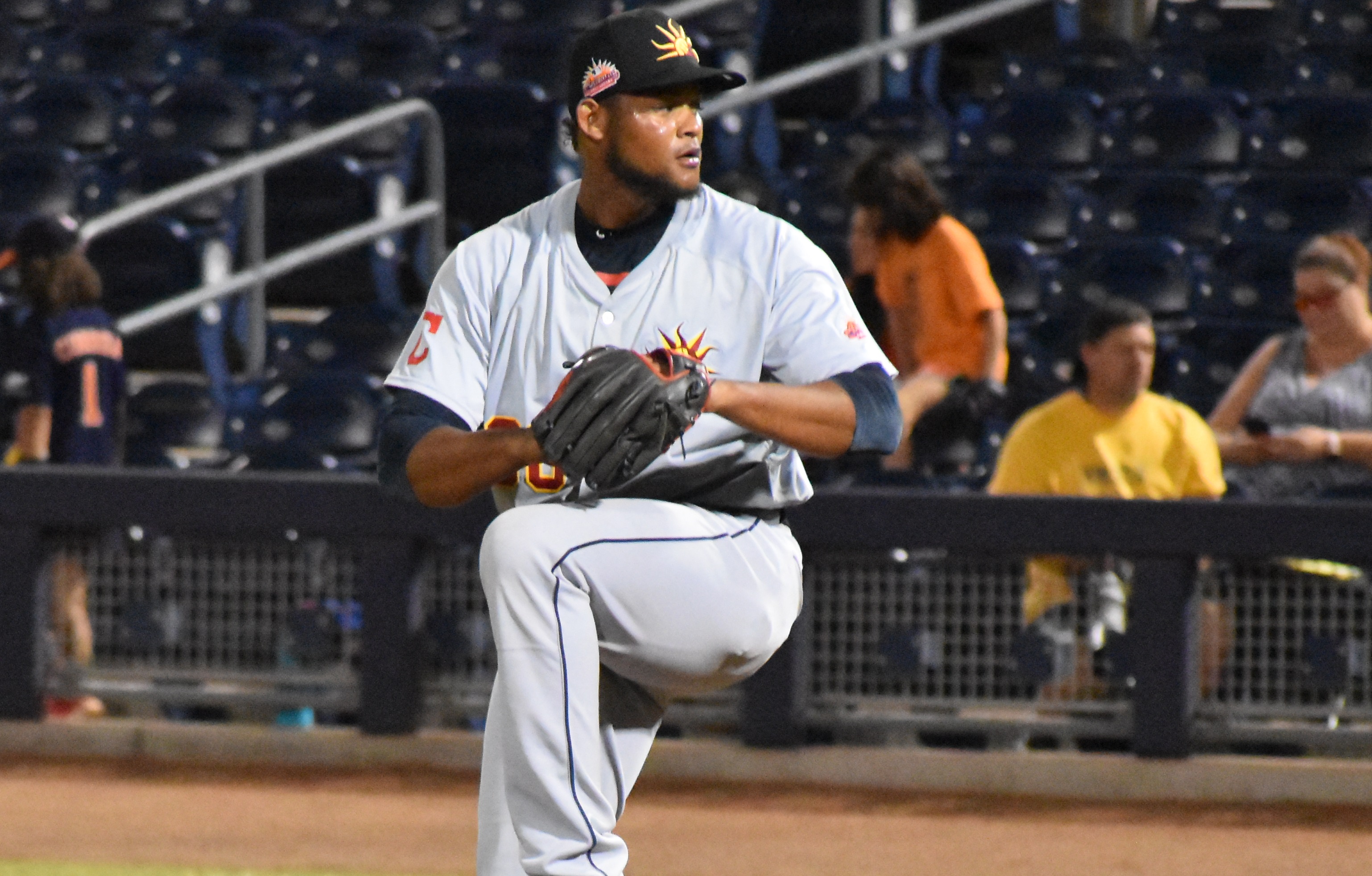 Manuel Alvarez was an odd signing by the Indians. While most international signings come on between 16 and 18 years old, Alvarez was 21 when he joined the franchise in 2017 and 22 when he finally made his debut last year with the Mahoning Valley Scrappers.

Despite a lack of MiLB experience, but as an older than average player,  Alvarez dominated in the New York/Penn League with a 2.28 ERA and just 14 hits allowed in 27.2 innings. He wrapped up that season in Lake County where he struck out another 10 in 10.2 innings, but had an ERA over ten as he allowed 13 earned runs.

With mixed results, Alvarez began 2019 back with the Captains where he quickly became the closer and was named a Midwest League All-Star. The issues with command that plagued him in the previous season still existed, but he saved nine games and won four others with just one loss and no blown saves in 30 games. His 2.90 ERA was better than his 4.24 FIP, likely aided by a .267 BABIP, but still had some merit with a career best 10.52 K/9.

On June 16th, Burning River Baseball published our top 25 minor league relievers in the Indians farm system and named Alvarez 13th and about a month later, he was promoted to the Hillcats following his All-Star selection.

Enter the fall league. Much like a student who has fallen behind in their studies and needs to take summer school classes to catch up, the Arizona Fall League allows those who are behind schedule (for whatever reason) to make up some ground. While many take advantage of this due to injury shortened seasons, with Alvarez the issue is much more his advanced age. Yes, he has already reached high A, but as a 23 year old, he should be there. As he didn’t quite dominate during his short appearance there, he certainly could use a little fall action to help him out.

Added to the roster of Indians affiliate, the Mesa Solar Sox, Alvarez would get just limited use as one of 15 relievers. Of course, this wouldn’t be a terrible thing as he already pitched 55.1 innings during the regular season. This would be more about working on improving his abilities rather than building up durability.

He made his debut on September 28th against the River Rafters and things could have went better. He walked the first hitter on four straight balls, then gave up a homer to top Twins prospect Royce Lewis. He walked the next batter, then finally recorded the first out in the seventh with a strike out before being removed for further relief. His second walk was allowed to score as well, permanently marring his ERA for the rest of the fall season thanks to three earned runs allowed in 0.1 innings (81.00 ERA).

Of course, the only way to go was up and in his next appearance he managed to sink that ERA to 27.00, but still walked two (including the first batter on four straight balls) and gave up a triple for one earned run allowed. The inning up to the triple can be seen below:

Against Peoria on October  5th, Alvarez had his first scoreless and hitless appearance, but he still walked one and this time didn’t get a strike out. His next time out was back to the same old thing. He got the first out, then walked the next two hitters on a total of nine pitches. A wild pitch and double later saddled him with a blown save as the Solar Sox went on to lose the scheduled seven inning game against the Rafters.

Alvarez would pitch once more on October 16th, going three up, three down for the first time of the season (on just eight pitches), again without a strike out. This gives him a 12.46 ERA with seven walks and three strike outs on the season in 4.1 innings. He has essentially been on a five day rotation almost like a starting pitcher and has pitched exactly one full inning in each appearance with the exception of his first game.

This fall has been the first time I’ve been able to observe Alvarez as he skipped the AZL, but already I’m seeing some obvious flaws that have troubled pitchers for the existence of the sport. Alvarez has a great fastball, of that there is no doubt. As seen in the video, once he gets ahead in the count, he can be extremely difficult to make contact with.

However, that is entirely irrelevant if he can’t throw strikes. It certainly seems that hitters are very rarely making contact with Alvarez, but when they do they smash the ball. In his largest sample, the 2019 regular season, he allowed an average of just .221 between both levels (with a very reasonable .304 BABIP), but a slugging percent of .324, a number that jumped to .386 with Lynchburg. In the fall league, the small sample makes everything look extreme, but each of his three hits has went for extra bases with a home run, double and triple allowed.

Essentially, Alvarez is harming himself. With difficulty finding the strike zone to the first batters he faces, he allows the following batters to be more patient and wait for the one pitch that they might be able to hit later in the at bat. If he can get ahead with a well placed fastball, there is rarely trouble later in the at bat, but starting out each plate appearance with ball one would be deadly to any pitcher.

Ultimately, Alvarez is essentially the opposite of the projects the Indians generally working on. Instead of being an established control arm that needs to learn how to throw harder, he’s a hard thrower with no control. This type of player has been more difficult for the Indians in recent seasons, hence their change in draft strategy, and has seen less success. There are definitely examples of success throughout the big leagues, but not particularly in Cleveland.

While it is an extremely small sample, there’s no question that Alvarez has not been able to improve on the one aspect of his game that he needed to while in Arizona. This likely means a return to Lynchburg in 2020 and he will have to make quick advancements there as he becomes rule 5 eligible at the end of that season. He has incredible talent and a great ceiling, but if he can’t figure out his command by the end of next season, it’s hard to imagine the Indians wasting a 40 man roster spot on him with so many other right handed relief prospects coming up behind him.