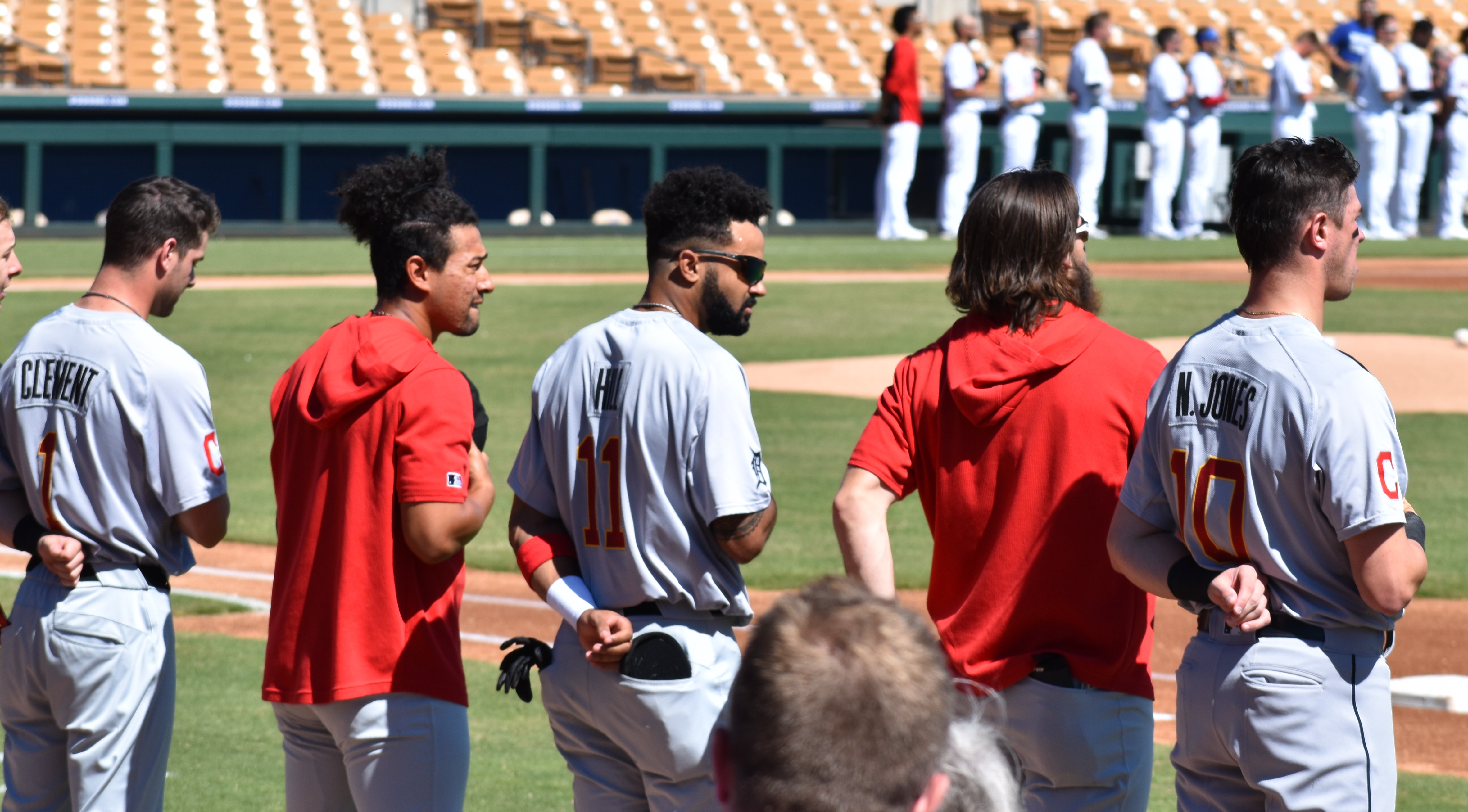 It was a bit of an odd season for the Mesa Solar Sox and not just because the Arizona Fall League started a month earlier than normal. The big names on the roster started off incredibly cold and the team fought for .500 all season, going 3-0 against Mexican Pacific League teams to boost their record to 15-13-1.

Overall, the bullpen was incredible while it was difficult to find a consistent start out of 60% of the rotation. The offense was also intermittent as the top players were amazing, but few in number.

Deichmann hits a fly ball for the Solar Sox against the Desert Dogs during the 2019 AFL season. – Joseph Coblitz, BurningRiverBaseball

Picking the top player on the 2019 Mesa Solar Sox was incredibly easy and there is a strong argument that he was also the top offensive player in the entire AFL, although his low batting average would likely turn off some. Athletics outfielder Greg Deichmann not only lead the league in home runs (9), but had more than double the next on the list. He also lead the AFL in slugging percent (.634, second place was .586) and came in second in RBI (20, one behind Brandon Wagner).

Generally a corner outfielder, injuries and planned off days forced Deichmann into a center field role from time to time and, while he wasn’t the most graceful I’ve ever seen play the position, he didn’t embarrass himself.

While Deichmann was strong from day one through the end, the biggest name on the team, Jo Adell took some time to start things up. However, once he did he was as hot as anyone. He finished the year with a very respectable .273/.351/.44 line, three home runs and a team high eight doubles. His Angels teammate Brandon Marsh was another stand out as he slugged .522, the second best mark on the Sox. Between this trio, nearly all of the Sox offense came from the outfield.

One stand out who didn’t play outfield was the Cubs 1B Alfonso Rivas who didn’t hit for much power, but held a .417 OBP thanks to ten walks in 15 games.

It was often all or nothing out of the Mesa starting rotation, but Daniel Gossett was incredibly consistent, pitching exactly three innings in four of his five starts and never allowing more than two runs. He finished the season with a 2.57 ERA and 12 strike outs to three walks.

Kirk McCarty was used in more of a traditional starter manner, pitching 24 innings in six appearances and had mixed results. He ended with a 3.00 ERA and 19 K’s with six walks allowed.

There were multiple outstanding performers in the bullpen as well, particularly Jhenderson Hurtado who didn’t allow a run through 11 innings this season. Jordan Minch also pitched ten innings and struck out 14 to one walk. Erich Uelman, Austin Warren and Isaac Mattson joined this pair as relievers with at least ten innings and an ERA below 2.00.

Jones puts the ball in play for the Solar Sox during a 2019 AFL game. – Joseph Coblitz, BurningRiverBaseball

Coming into the season, Nolan Jones (CLE) was the second biggest name behind Adell and like Adell, he had a very slow start. Over his first seven games, he went 5 for 29 with no extra base hits, but he managed to turn things around over his final eight, hitting 7 for 31 with four home runs and two doubles. He was pulled from the roster following his selection to the Fall Stars team as he needed thumb surgery. It’s possible that playing hurt explains his poor play early on.

Nearly the entire starting rotation could fit into this category as well as they didn’t have great numbers, but did have moments of excellence. Both Keegan Thompson (CHC) and Aaron Hernandez (LAA) threw shut outs in their debuts, struggled for three starts, then threw another shut out in their fifth start. Hernandez’s was particularly impressive as he went five no hit innings with five strike outs and just one walk allowed. The ability is certainly there for both pitchers, but overall consistency is a problem.

Finally, Jahmai Jones (LAA) didn’t have superstar numbers, but was a really solid all around player. Starting regularly at second, he was a fine defender, good base runner and hit for a little power. After having a really rough regular season, his play this fall has to be considered a tremendous positive note.

Teaney pitches in relief for the Solar Sox during the 2019 AFL season. – Joseph Coblitz, BurningRiverBaseball

Before getting to a pile of Indians, the Cubs first baseman Jared Young struggled in AA this year despite already being 24 years old and, given his position and age, was easily the most disappointing hitter on the entire Mesa roster. He hit just .196/.315/.304, although he did have the best walk to strike out ratio on the team, so he has plate discipline in his favor.

Another extremely disappointing offensive performer was Gavin Collins. He turned 24 about a week after Young, but played in high A in 2019 where he was moderately successful. In the AFL, however, his tendency to be patient early in at bats often left him in a hole and he wasn’t able to dig out, hitting just .162/.233/.297 as part time catcher. At 112 games this season, Collins has far exceeded his previous high in playing time, but that excuse may not be enough to explain his poor performance.

Finally, while the bullpen as a whole was fantastic, those pitchers supplied by the Indians were absolutely terrible. Jonathan Teaney couldn’t throw a strike no matter how hard he tried and walked a team high nine despite pitching just 10.1 innings (he also allowed 12 hits, giving him the only WHIP above 2.00 on the team.

Manuel Alvarez also had control issues, but his fastball was so good that he could get away with it at times. He finished second on the team in walks at 8 despite throwing just 6.1 innings. His 8.53 ERA was second worse on the team, although he only allowed four hits and struck out seven.

Argenis Angulo also went 6.1 innings in relief, allowing seven hits, five walks and four runs. The only really rough non-Indians reliever was Will Vest of Detroit. He didn’t struggle with command as much as some of the others, but lacked swing and miss stuff, leading to 15 hits allowed (most by a reliever), 11 earned runs (second most by any pitcher and most by a reliever) and a team worst 8.74 ERA.

Jahmai Jones hits one to the opposite field during a 2019 Mesa Solar Sox game. – Joseph Coblitz, BurningRiverBaseball