NXT Vs. 'SmackDown' May Lead To a Wednesday Night Win Over AEW 'Dynamite' 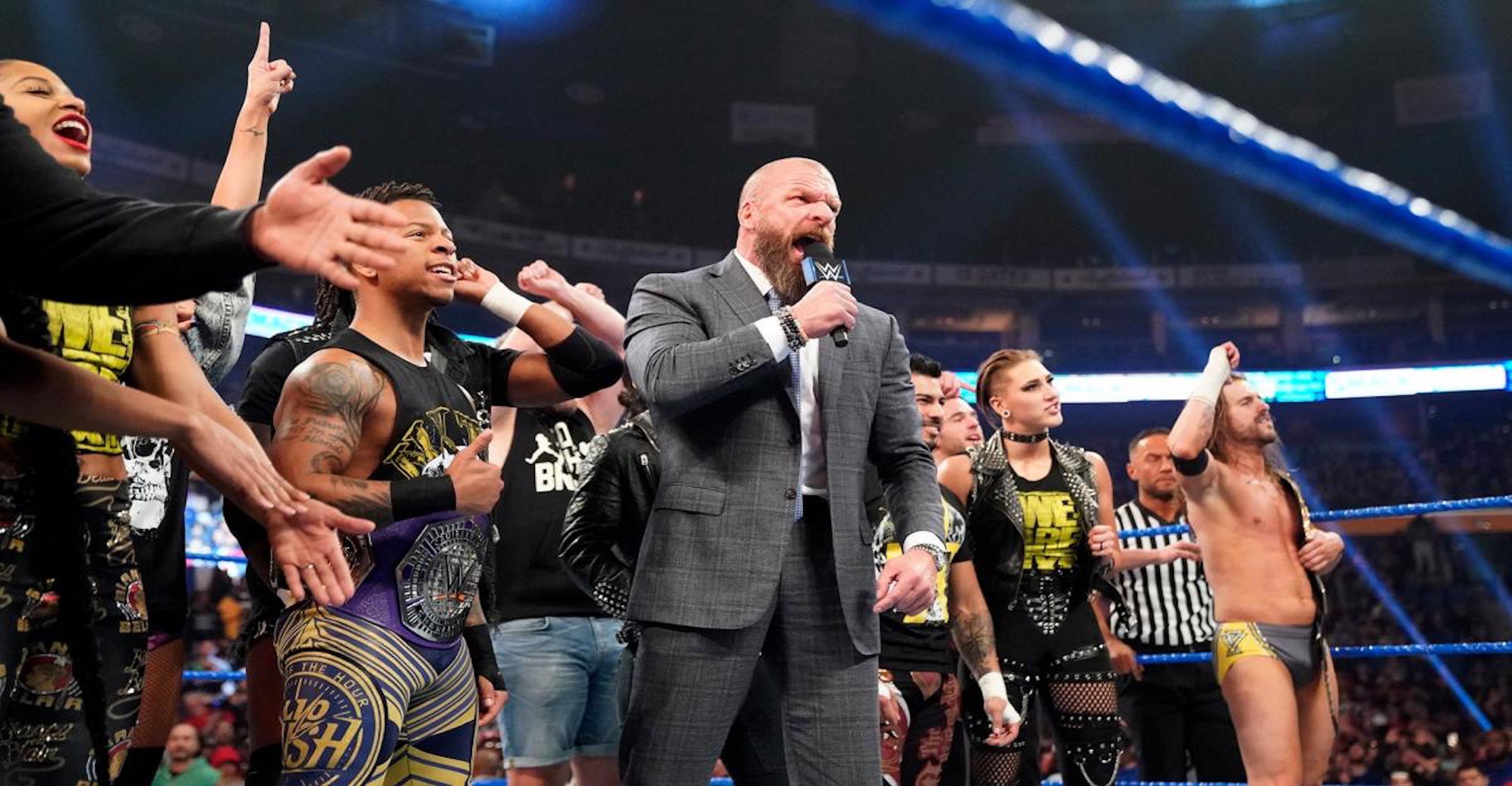 NXT Vs. 'SmackDown' May Lead To a Wednesday Night Win Over AEW 'Dynamite'

The November 1 edition of Friday Night SmackDown was one of the most shocking programs in recent WWE history. While a good portion of the blue brand’s roster was stuck in Saudi Arabia following October 31’s Crown Jewel, the crew from NXT arrived and made history.

Many WWE fans are calling it an NXT invasion and with good reason. From Shayna Baszler’s attack on SmackDown Women’s champion Bayley, to NXT champion Adam Cole’s win over Daniel Bryan, the blue brand was put on notice. NXT is indeed a competitive force in WWE and they’re only just getting started. But there’s also much more going on with this angle.

Longtime WWE fans were surely happy to see the black and gold brand get their day in the sun. For years, the company has promoted SmackDown and Monday Night Raw as the “main rosters” and fans have always bought in to that concept.

But times have changed now that NXT is airing live on the USA Network. The once developmental brand is now a viable third brand for Vince McMahon’s company. Instead of being used as a starting point, NXT is becoming a destination.

More fans know NXT than ever before, as their talents are evolving into household names. This wasn’t the case just a couple of years ago and that was obvious whenever NXT’s best appeared on either of the big two programs.

Some of the audience knew who they were, but many more did not. It was as if NXT existed in a bubble, separated from the rest of WWE. Indeed, NXT’s status as a WWE Network original kept it just out of reach of the mainstream audience. But now NXT is living in the spotlight and it couldn’t have come at a better time.

All Elite Wrestling has also arrived on mainstream television. Tony Khan’s company is getting valuable exposure on TNT, where Dynamite airs every Wednesday night. AEW is not the ratings juggernaut that WWE is, but that may not have been the point in the first place.

AEW is a growing company, which means each day is another step in their journey. Diehard fans know the majority of AEW’s roster, but the causal fans are perhaps not that familiar. The best way to rectify that problem is to put the product on as many screens as possible, which is the point of Dynamite.

So while AEW’s new program is still working to gain credibility, the company is still far from WWE’s numbers. But that’s not the case for AEW when it comes to NXT. The black and gold brand may be a hit and it may be enjoying its own increased spotlight, but the program is constantly coming in second to AEW.

This was likely expected by many fans, who knew that AEW would make an immediate impact. Full-time pro wrestling fans wanted to see how the program looked and the same was true of casual fans, who had the chance to watch AEW without having to purchase the pay-per-views.

But perhaps the most important element of AEW’s growing audience are the older fans who left the sport when WCW closed its doors in 2001. Those fans wanted nothing to do with WWE and decided to call it a day on the industry. The same is true of many Attitude Era fans, who turned off WWE when the company’s product became PG.

AEW’s ratings are not setting records, that much is true. But they’re beating NXT and that definitely counts for something. Some pro wrestling insiders predicted that if AEW gained momentum, then Vince McMahon would hit the panic button and take over the program.

This meant that the fan friendly NXT, which always prided itself on a commitment to the in-ring product, would become a clone of Raw and SmackDown. Both of those programs are rife with convoluted characters and unresolved storylines, neither of which describes NXT. But McMahon seems to be trusting NXT in Triple H’s hands, which is what fans were hoping for.

So now that the NXT brand has shocked the system and took center stage in the process, the only question is what happens next? Anytime one program invaded the other in the past, there was always a counterattack. NXT is new to this war between the brands, but is a rebuttal from SmackDown now on the way?

NXT’s ratings are better than WWE was hoping for, or they’re right on track. Either way, NXT can improve its numbers and should, especially with AEW taking the lead on Wednesday nights. Coming in second is not something that the McMahon family is accustomed to and that has surely not changed now.

An invasion from SmackDown’s top stars on NXT will boost the program’s ratings. WWE could announce that the blue brand is seeking retribution, which means that NXT will be overrun with SmackDown’s best and brightest. If that happens and NXT’s ratings improve, then there may be more of this angle to come.

If NXT is a true third brand, then it needs to be treated as such. The program is now hotter than ever before and fans will expect it to eventually rise to respectable numbers in the ratings, which is what WWE surely expects as well. If the NXT roster begins crossing over with the roster of SmackDown and possibly Raw, then the ratings should improve.

The war between NXT and Friday Night SmackDown is being waged to promote WWE’s upcoming Survivor Series event on November 24. But there may be more to it than that, as NXT definitely needs a push in the right direction. If that happens with this angle, then NXT could perhaps leave AEW far behind.