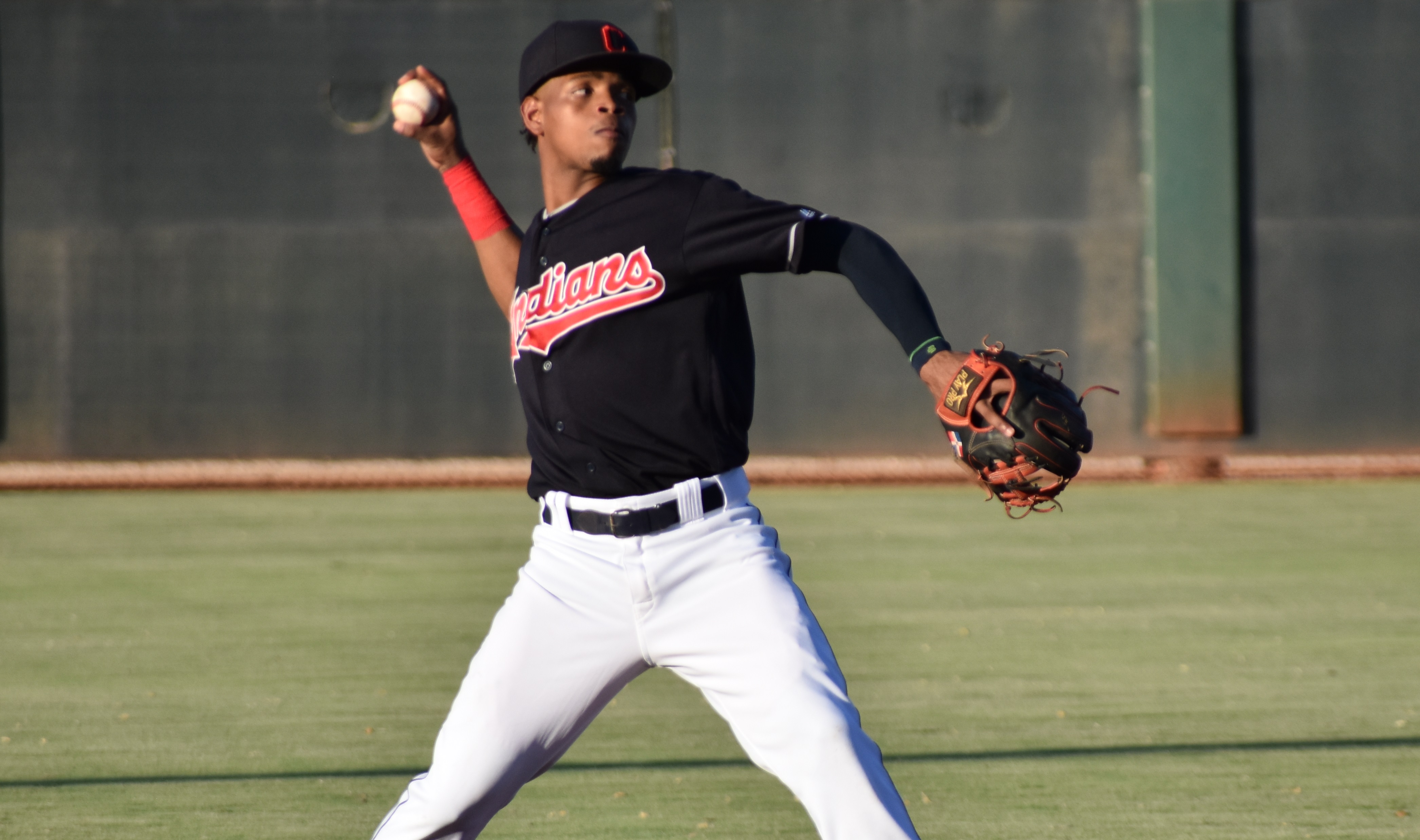 This is day five of Burning River Baseball’s Cleveland Indians prospect rankings and we are now reaching numbers 21 through 30. To qualify for the list, players must be in the Indians minor league system heading into the 2020 season and have zero games of Major League experience.

By Joseph Coblitz
We were impressed enough with Noel’s 2018 season in the Dominican Summer League that he snuck into the rankings in the last spot unseen. Now that I’ve had a chance to view him extensively, I am even more impressed. First, he is a giant and his official 6’1″ 180 lbs is very off. The numbers are probably from when he signed at 16 and he has grown significantly since then. He makes great use of this power at the plate, blasting fly balls to all fields with greater velocity than nearly anyone else in the AZL.

The most impressive part about Noel, however, is his bat speed. He is able to adjust to pretty much anything and go with the pitch, helping him avoid extreme outfield shifts and strike outs. His only questions come defensively, although he is a surprisingly athletic first baseman. The Indians pushed him more towards third as the season ended and he showed off a strong, if not always accurate arm and a lead glove.

By Joseph Coblitz
While he originally looked like a light hitting utility infielder, Fermin has consistently raised his slugging percent and OBP over each season to the point where he is now one of the Indians top mid-level middle infielders. He hit .293/.374/.379 in his first season in A ball with 28 steals in 37 attempts. His ability to play above average defense at short and second should help him as well as he continues up the system. While he remains far from a sure thing and his ceiling still looks fairly low, his vast improvements over the last two seasons give new hope to his potential.

By Joseph Coblitz
The Indians 2018 draft already looked extremely heavy in high end pitchers, and now Morris can be added to that list. After missing all of 2018, he has emerged in 2019 with an 11.2 K/9 in his first 89 innings. This is from the trio of great disparity in velocity, a great breaking ball and good command. Most impressively, he started the season in extended spring, but was able to skip both Arizona and Mahoning Valley on his way to dominating as a starter in Lake County. Then, he put up similar peripheral numbers in a similar amount of time in Lynchburg (forget the high ERA that was abnormally effected by a .390 BABIP).

Because he is 22 already, he isn’t incredibly young for high A or AA next year, although it is a quick ascent given this is his first season. Because of that, we haven’t seen enough of Morris to really evaluate his potential, but I could see him ultimately falling into a pen role where his stuff would be very dynamic.

By Joseph Coblitz
Just like the 2018 draft was heavy in starting pitchers, the 2017 international class was full of athletic middle infielders. Tena is considered the least of the three big names by most (behind Aaron Bracho and Brayan Rocchio) and he is behind them on this list, but is a rapid riser (at least on our list).

Tena replicated his solid 2018 numbers from the DSL in his first season in the US and now has a career line of .319/.360/.440. If there is a knock on Tena, it is that he is an all or nothing player. He hits the ball hard, but strikes out a lot and essentially never walks. He’s fast, but doesn’t steal a ton. He can reach nearly everything on defense, but loses concentration from time to time and ultimately committed 12 errors in 39 games this year. He’s been used almost exclusively at short where his range is best utilized, but his arm is most exposed. With better defenders around him, it wouldn’t be surprising to see a move to second, but the Indians also shouldn’t give up on him at short.

By Joseph Coblitz
Gonzalez made massive improvements between short season ball in 2017 and Lake County in 2018, improving his slugging percent from .388 to .435, but a strike out rate above 20% and just 12 walks in nearly 500 plate appearances left some major questions. This year, he had a nearly identical batting line, but managed to cut the strike outs down despite playing in high A and Akron.

Always an aggressive hitter, Gonzalez appears to be making more solid contact early in the count, helping him drop that K-rate to 16.5% in 2019 while walking just 15 times in over 500 plate appearances. With the problem of strike outs somewhat alleviated, there are three issues with Gonzalez. First, he is an awful defender and will likely be relegated to DH should he make it to the big leagues. Similarly, he’s slow-footed on the bases and should be considered a station to station runner. Finally, he has had an extremely high BABIP (.350) in each of his last four seasons.

Gonzalez hits the ball as hard as anyone I’ve ever seen, but is a fly ball hitter and shouldn’t be expected to have such a high BABIP. If and when his luck runs out, his OBP could diminish to values detrimental to the team.

By Joseph Coblitz
Who doesn’t like a wacky delivery from a reliever? Rholl brings the heat from a side arm delivery from the left side, something you don’t see too often. While he can lose control at times, he has struck out 94 already over his first 70.2 innings with a 1.53 ERA. Despite skipping short season, he was dominant in his first season in A ball this year.

The two issues with Rholl are his command and his age. He’s already hit nine batters in addition to allowing a 5.6 BB/9. That is very likely the reason he has been held back while others in his draft class were quickly vaulted to AA. This goes right into the issue of his age as we have seen many college players take on the AZL and dominate, only to struggle later on. His success in Lake County could be proof that it won’t happen here, but he was still over a year older than the average A baller. I’d like to see him reach Akron by the end of 2020 to make up some of that ground.

By Joseph Coblitz
The reasoning for Kwan being higher than players like Gonzalez at #26 or even Noel at #30 on this list is that his floor is incredibly high. A college pick out of Oregon State, Kwan’s base level skills are extremely impressive. He has a very quick bat with good contact skills and a good eye at the plate. He’s also a fast defender with good reactions and a strong arm.

These assets allowed Kwan to skip straight from playing just one week in short season last year all the way to high A Lynchburg this season. His line there of .280/.353/.382 was extremely impressive, although it does highlight his lack of power. Most of the extra base hits that he does accrue come from his line drive, gap approach and his great speed. Of course, these skills should continue to play at higher levels and he should be a starter in Akron in 2020.

By Stacy Hannan
Tom put together a superb season for the Indians’ organization, and was one of the most pleasant surprises of the minor league season. It took some fans by surprise because Tom preceded this season with two completely average seasons of ball. In 2018, Tom hit .254 with 12 HR in a full season with AA Akron. The season prior, Tom hit .254 with 10 HR for High-A Lynchburg. Something seems to have clicked for the young outfielder, and he put together an outstanding season between AA and AAA this season.

He started the season with Akron, hitting .285/.386/.512, with 14 home runs, 12 doubles, and 42 RBI. After earning a promotion to AAA Columbus, Tom really caught fire. In 51 games, he hit .298/.370./564, with nine home runs, 15 doubles, and 44 RBI. Tom ended his season on a high note, earning International League Playoff MVP honors for the Clippers during their postseason run. Tom is a very good defensive outfielder, and may have played his way into the crowded competition for Indians’ roster spots next spring. It is worth a watch to see if the Tribe believes in him enough to add him to its 40-man roster over the off-season, to protect him from being plucked away in the Rule 5 Draft.

Palacios hits a fly ball during his brief appearance with the AZL Indians in 2018. – Joseph Coblitz, BurningRiverBaseball

By Joseph Coblitz
Palacios began his career as scorching hot as possible, hitting .361/.421/.538 across his first 45 games as he jumped from Arizona to Mahoning Valley to Lake County. In recent seasons, this kind of movement for an Indians  position player has been unheard of and Palacios looked to be the starting second baseman for the Captains this year with another quick promotion likely.

Then, he tore his labrum during spring training. While not as common as Tommy John surgery, recovery from pretty much any shoulder surgery is just as serious and he missed all of 2019. Strangely, the other option for 2B in Lake County had the exact same surgery, the already mentioned Jose Fermin at #29.

Now, instead of being way ahead of schedule, Palacios is essentially even with the rest of his class. He could begin 2020 with Lynchburg, but with a good season in 2019, he would be in Akron already. When healthy, Palacios is the prototypical second baseman. An above average defender with good speed on the bases that doesn’t strike out much and hits for only a little power.

By Stacy Hannan
Moss joined the Indians as one of the lesser-heralded pieces of the Trevor Bauer trade in July. Even though he was not a headliner in that trade, he could be a valuable piece. Moss is a lefty with the upside to be a starter at the next level. It is well documented that the Indians are lacking in lefty starters these days, so that attribute alone makes Moss an intriguing prospect. His 2019 stats are also promising. With Cincinnati’s AA Chattanooga Lookouts this season, Moss went 6-5 with a 3.44 ERA in 20 starts. Over that span Moss struck out an impressive 123 batters in in 102 IP, while surrendering 57 walks.

After joining the Indians he was assigned to AA Akron for two starts, and he went 2-0 with a 0.00 ERA. He joined the AAA Clippers for the final four games of the season, where he went 2-1 with a 1.93 ERA. Moss will likely start next season in AAA, and it will be interesting to see how he continues to develop. If he can grow into a major league caliber starter, he could fill that left-handed void that has plagued the Indians rotation that past few years. At the very least, with his strikeout abilities he could become a valuable left-handed piece of the bullpen.