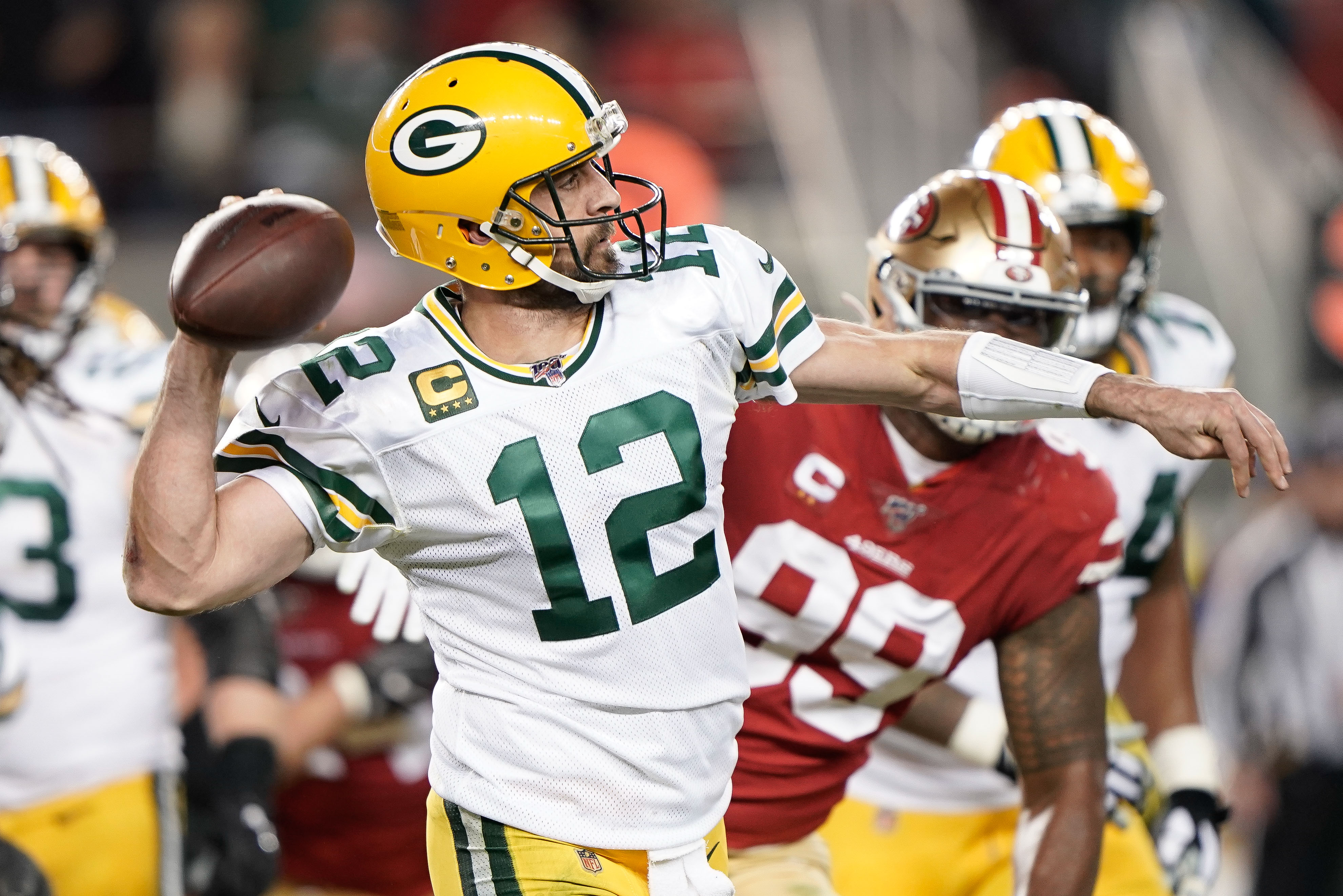 The Green Bay Packers were outplayed in every aspect of the game in an embarrassing 37-8 loss to the San Francisco 49ers Sunday in Santa Clara. The loss dropped the Packers to 8-3 on the season and they are now in a tie with the Minnesota Vikings for first place in the NFC North although the Packers won the only head-to-head matchup so far between the teams.

The Packers failed to generate much offense or stop the 49ers on defense in a game where not much went right.

The biggest disappointment was that the team didn’t rise to the occasion in what was clearly a big game being played on a big stage.

Here are 10 things we learned from the Packers loss to the 49ers:

1. The Packers Weren’t Ready to Play

Despite the build up to this game, the Packers didn’t come ready to play. A personal foul penalty on Davante Adams cost the Pack 15 yards after they picked up a first down on the opening drive and then a strip sack gave the 49ers the ball deep in Packers territory. Green Bay trailed 7-0 before everybody even got to their seats.

The Packers offense didn’t get anything going before the team was trailing by two scores and they failed to sustain anything consistently.

The team seemed flat for a game that they clearly needed to be playing at a peak emotional and physical level.

Well, George Kittle did play and the Packers couldn’t stop him at all. The 49ers tight end finished the game with six catches for 129 yards and 61-yard touchdown grab that essentially sealed the win for San Francisco.

The Packers couldn’t cover Kittle and they struggled to bring him down after the catch. Opposing tight ends continue to be a matchup nightmare for the Green Bay defense.

If the Packers are still allowing passes over the middle like this come the playoffs, they will not last long come January.

For all the complaints opposing fans give about the officiating, it certainly did not favor the Packers tonight. The call against Davante Adams on the opening drive was very questionable, as was a hands-to-the-face penalty against Kevin King which nullified a sack. The replay showed King hit the 49ers receiver on the shoulder pad.

Either way, none of this would have made much difference tonight when the Packers were simply outplayed in all three phases of the game, but it’s worth noting for the record.

The Packers lost starting RT Bryan Bulaga to a knee injury in the first quarter and his absence was keenly felt. Replacement Alex Light struggled in pass protection, especially gainst Nick Bosa. Bosa was in the Green Bay backfield all game and the Packers couldn’t throw the ball downfield as a result.

Rodgers finished the game with just 104 yards on 20 completions, a paltry 5.2-yards per completion and 3.2-yards per attempt. The team had just 81 total yards passing for the game.

The Packers tried to use running backs and tight ends to chip Bosa, but the result was that there was almost always a mismatch somewhere along the offensive line and fewer receivers for Rodgers to throw the ball to.

San Francisco finished the game with five sacks and six hits and got consistent pressure on Rodgers.

The Packers did eventually adjust their play calling in the second half, but the game was all but out of reach by then.

It was a poor pass blocking performance by the offense.

5. The Third Down Offense Was Awful

The Packers couldn’t have done any worse on third down conversions than they did. Green Bay was an embarrassing 1-for-15 for the game with the only first down coming in garbage time.

The Packers cannot win football games with this kind of conversion rate on third downs. Richard Sherman did a great job of limiting Davante Adams and because of the San Francisco pass rush the Packers couldn’t get the ball down the field. Overall, just a poor performance by the Green Bay offense across the board.

Linsley is a fine center, but the quickness and strength of the interior line of the 49ers gave him and the rest of the offensive line fits. On several plays throughout the game, runs were stuffed on plays which Linsley was pushed back behind the line of scrimmage by the defense.

He was far from alone over the course of the game. The Packers offensive line was generally overmatched in pass protection and run blocking.

It was a long time coming but Adams finally got his first touchdown reception of the season. He also got the two-point conversion that followed. However, for the game, the San Francisco defense held Adams to just 43 yards on seven catches for an average of just 6.1-yards per catch. That’s great rushing numbers for a running back but terrible for a number one receiver in a big game.

Adams long reception today was just 14 yards and he was targeted 12 times during the game.

The Packers will need more touchdowns from Adams in the final five games to win the division and clinch a playoff berth.

8. The Smiths Still Got Pressure on the Quarterback

The Smiths did a good job of pressuring Jimmy Garoppolo over the course of the evening. Za’Darius was credited with 1.5 sacks and Preston with 0.5 but the rush was getting to the San Francisco quarterback on those occasions that he didn’t release the ball immediately. The other sack came on a blitz by Blake Martinez.

Za’Darius now has 10 sacks on the season and Preston has 10.5. The pressure by the duo forced the 49ers to change their personnel at left tackle during the game which did then slow down the Green Bay pass rush a bit more.

The Green Bay special teams are still a big problem. JK Scott punted six times for an average of just 37.2 yards despite the favorable weather. He has struggled the last few games after a very strong start to the season.

The return game is also a problem. Tremon Smith averaged only 20 yards on two kick returns and lost three yards on two punt returns. The blocking just isn’t there and the return units just look unimpressive.

This is something Green Bay needs to improve quickly, or it will cost them in a close game against good competition.

The Packers franchise quarterback didn’t rise to the occasion in this big game. The former Cal star struggled in his return home and didn’t generate any offense or any magic for most of the game.

The Packers third down conversion failures and inability to get the ball downfield were not all Rodgers’ fault, but he shares in the blame for these problems.

As a veteran on a team with a lot of young players, the Packers needed Rodgers to be at his best. He wasn’t.

Rodgers’ final quarterback rating was a poor 75.8 despite the fact he didn’t throw an interception. His poor yards-per-attempt numbers really killed his rating and they accurately reflect his very disappointing performance.

The 49ers also did a very good job of keeping Rodgers in the pocket and not letting him escape and scramble for big first downs.

Overall, this was an atypically poor game from a quarterback who has made a career out of playing his best when it counted most.