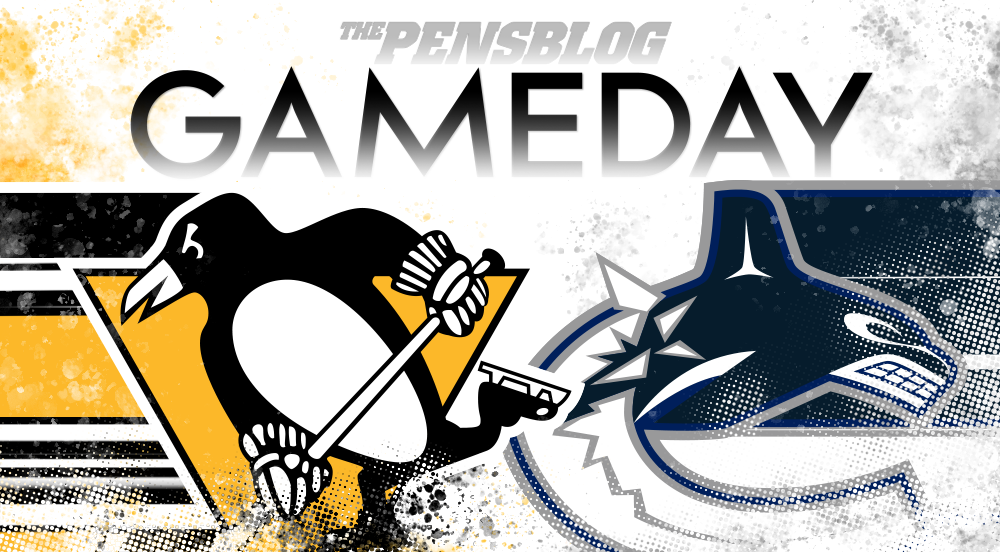 The Paint Can | Pittsburgh, PA

The Penguins host the Vancouver Canucks tonight in a Thanksgiving eve showdown(?) at The Paint Can. Vancouver has surprised several people by putting together their first winning record through 25 games since the Sedins left. Coming into tonight Vancouver is 12-9-4, though stumbling a bit as of late going 2-2-1 in their last five. On the more important side of the ice, the Penguins have quietly put together a five-game point streak without their captain going 3-0-2 in their last five. One month after playing through more injuries than Bill Peters N-bomb count the Penguins have put up a 6-2-3 record so far in November with three games remaining, the team has a back-to-back Friday and Saturday at Columbus and St. Louis to finish the month.

Bringing it back to tonight’s game, the Canucks are unpredictable in terms of what you will get each game. In their last five, they have won one 6-3, lost one 6-1, and then lost two close ones 2-1, to Washington and Philly. A lot of this hit or miss from Vancouver can be accurately seen in their heat maps, supplied by hockeyviz.com

As you can see, their offensive heat map is nearly identical to their defensive. This bodes well for the Penguins, who have had a lot of success this season against teams who are weakest in front of their goal. This is because Sullivan’s system drives the play to the center of the zone, and the Penguins have a ton of players that are really good at finishing. When we compare the Canuck’s defensive heat map to the Penguins offensive we see how the matchup favors the Pens:

I don’t expect many changes from the Penguins. Zach Trotman continues holding is blackmail over Sullivan’s head so he will most likely start again over Riikola. The starting goaltender will be decided at the morning skate, you can make a case for both guys and I’m not sure there is a wrong choice. I would lean towards Jarry, with a back-to-back coming up this weekend that would give Murray some significant time off.

As for Vancouver, that is Tanner Pearson on the second line so count him for at least one goal tonight. That is also Loui Eriksson putting his six million dollars per year contract to good use on the fourth line.

It’s the eve of Thanksgiving. Tonight could be your last chance of peace for the weekend. Your talkative aunt has already shown up uninvited. It’s okay. It’s a hockey night in Pittsburgh, and that is all you need to be thankful for. Grab some bourbon. Drink every time Bob Errey says “great stuff” and every time Jay says “freeze it right Der” and suddenly your family will become tolerable.