The Phillies Will Look To Take Advantage of Zack Wheeler's Upside 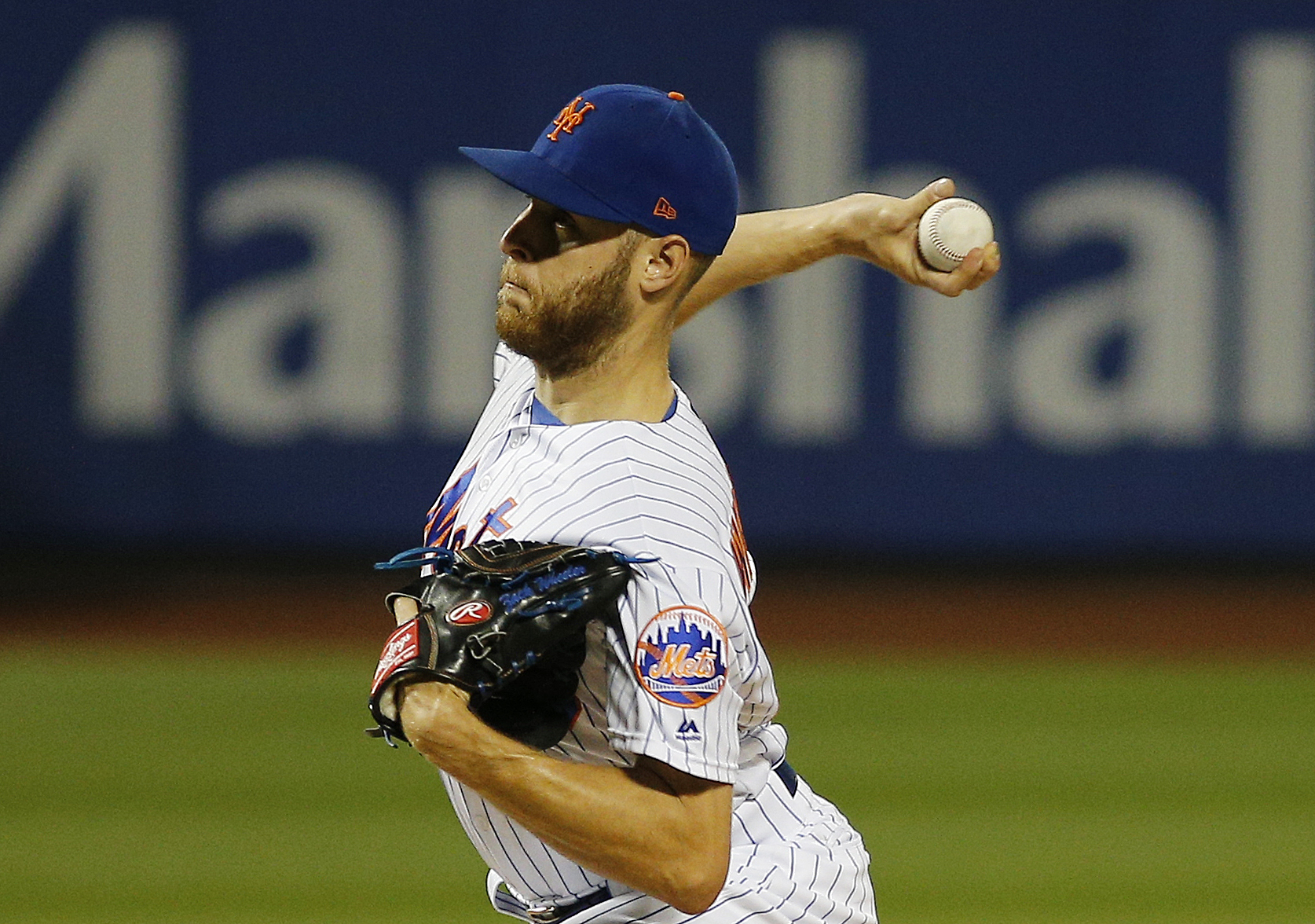 The Phillies Will Look To Take Advantage of Zack Wheeler's Upside

On Wednesday, less than a week prior to the annual Winter Meetings, the Phillies and pitcher Zack Wheeler agreed on a 5 year $118 million contract. Wheeler, yet another free agent the Phillies have been able to lure away from a division rival’s team, was a hot commodity on the free-agent market. Despite many predictions expecting Wheeler to receive less length and AAV on his free-agent deal, he was able to strike a large deal and still had interest from several teams, including the White Sox and Reds to name a few.

Wheeler will slide into a relatively weak Phillies rotation, right behind Aaron Nola. While the team will likely continue to look for more upgrades in their starting rotation as well as other areas, the front office still felt comfortable paying Wheeler much more than most people expected, even if it takes them out of contention for better pitchers such as Stephen Strasburg and Gerrit Cole. While Wheeler only signed with one team, there were several others who sought out Wheeler as a key addition.

Why were teams so interested in the former Met, despite him not being the clear #1 at his position? The easy answer is the upside that they saw. Teams are looking for players that will not take up their entire payroll but could possibly play like an All-Star. Especially teams like the Phillies, who have several holes to fill, want to stay within a budget but also realize they need more help than one top player could give them. Even if Wheeler’s price was driven up, there were not any alternatives that appear to have the Ace upside that Wheeler has.

At only 29 years old, Wheeler is relatively young for a free agent. While you certainly do not expect a breakout season from a player nearing 30, it is more possible than some other arms. Wheeler also throws very hard. In 2019, Wheeler placed in the 94th percentile in terms of fastball velocity and threw a slider and changeup that have been able to hit 90 on a consistent basis. As teams target underlying skills, especially velocity, even more, it is not surprising to see Wheeler coveted as a possible “sleeper”. The Phillies have certainly placed an emphasis on fastball velocity so far this offseason, with Robert Stock being one other name that stands out.

Wheeler’s hard-throwing style has attracted many analysts to view Wheeler as a possible breakout pitcher. Maybe somebody that could compete for a Cy Young if he puts it all together. However, Wheeler is not the typical hard-throwing pitcher. His strengths have come from commanding the ball and limiting good contact. Over the past 2 seasons, only 19 other pitchers have walked fewer batters per inning than Wheeler, and his Edge% since 2017 has been 44.9% (compared to 42.6% average), putting him in company with many control artists. In fact, he has ranked 12th in pitchers in placing the ball in the strike zone. So while many “breakout candidates” are looking to improve overall command of pitches, that does not seem to be what is stopping Wheeler.

Another area that typically hurts young and hard-throwing pitchers is contact control. However, Wheeler has been above average in that category. In 2018 Wheeler allowed 0.69 HR/9, and in 2019 he allowed 1.01 HR/9, both numbers well below average. His Barrel% the past two seasons have been below 5.3%, with the league average 1% higher. Barrels are typically a good indicator as to whether you will continue to have a home run problem in the future or not. Furthermore, Wheeler’s percentage of fly balls that were hit to the pull side has never exceeded 25%, making it much harder for batters to actually hit it out even if they do get it in the air.

A pitcher already in his prime with strong contact control and command with not-that-special strikeout numbers (23.6 K%, 84.1 Z-Contact%, and 10.4 SwStr% all no better than league average and are in line with career numbers) typically is not considered much of a breakout type. However, given his velocity, he has made many fans wonder if he could better utilize his stuff in order to whiff an elite amount of batters and be considered a true #1 in a rotation.

Ben Clemens, among others, has pointed to the approach to locating his fastball as an issue that needs addressing. With a fast fastball, he could benefit by throwing his fastball higher in the zone than he did in 2019, as many others around the league have. While I do agree that it should be a point of emphasis, it does not seem as if it is a cure that will lead to Wheeler becoming the next Gerrit Cole. The truth is that Wheeler has never been averse to throwing high fastballs to get whiffs. With 2 strikes in 2018, Wheeler threw his fastball about as up in the zone as you would want. After returning from an injury in the latter part of July, Wheeler’s fastball location with 2 strikes is also mostly at the top of the zone. For a few months in the 1st half, Wheeler had problems getting his fastball out of middle-middle, but that problem has not only already been fixed, but it has not resulted in better strikeout numbers, possibly because the rise on his fastball is only in the 55th percentile, good but not elite.

Rather than the fastball being the problem keeping Wheeler from reaching his full potential, I believe his curve will be the key to a successful tenure with Philadelphia. His curve has a 10% usage rate despite having a career GB% over 50%, career IFFB% over 17%, Zone% over 37%, and SwStr% at nearly 12%. This curve has a 17 mph difference from his fastball and a Plate:PreMax Ratio (ratio of distance between back-to-back pitches at batter’s swing decision time and when it crosses the plate) on his fastball-curve combination similar to his fastball-slider combination, so the two pitches pair relatively well enough, even if not perfectly. His curveball as it presently stands is not an elite pitch, but if Wheeler wants his fastball to be more effective and to mix his pitches up more, increasing the usage on his curveball, especially with 2 strikes when it had a PutAway% higher than any other pitch he threw over 100 times the past 2 seasons.

His curveball even has potential to be even more effective with changes in location. Wheeler mostly attempts to throw his curveball in the strike zone. That means some over the heart of the plate, and even the lower pitches are mostly still at the bottom of the zone. While obviously, this leads to fewer balls, which is good, but baseball as a whole has started to lean towards throwing curves in the dirt in order to get more swings and misses. That approach would be a more effective use of a pitch with the 71st percentile spin rate and would pair up better with a high-velocity heater. After all, he does not miss many bats with the pitch higher in the zone compared to when he throws it low, but when he does throw it low he continues to draw swings.

Another issue Wheeler has had over his career has been staying effective throughout the game. Over his entire career, his ERA the 3rd time through the order has been over 5.00 compared to under 3.50 the first 2 times through. There is a similar gap in wOBA, K-BB%, and xFIP. Mixing up his pitches more, rather than mostly relying on his fastball and slider, should allow him to be more effective against left-handed batters (who generally hit sliders better) and also more times through the order. If that does not work out, however, it is likely worthwhile for the Phillies and Girardi to be willing to shorten the leash on him, at least late in the season and during the playoffs, as that will make him much more effective on a per-rate basis.