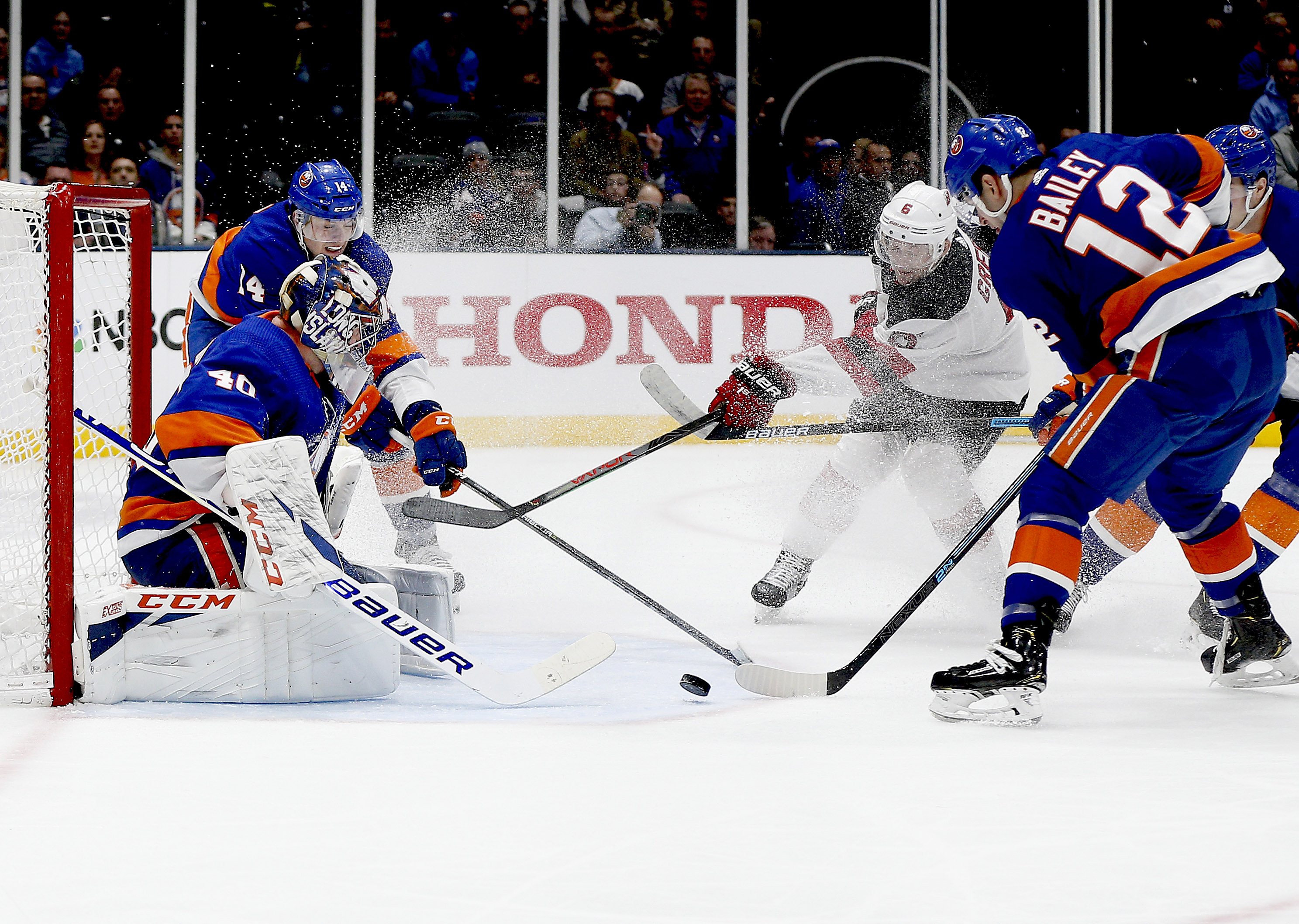 UNIONDALE, N.Y. — The Islanders dropped their fourth straight game on Nassau Coliseum ice on Thursday in a 2-1 loss to the New Jersey Devils.

A goal by Nico Hischier 1:09 into the third period turned out to be game-winner for New Jersey, which picked up its third consecutive victory. P.K. Subban scored with 1:27 left in the second period to tie the game at one.

Brock Nelson scored the Islanders only goal of the evening and Semyon Varlamov made 29 saves in the loss. It was just Varlamov’s fourth loss of the year.

Isles need to start picking up points at home

Finding wins at Nassau Coliseum has become a particularly hard thing to do for the Islanders of late. They’ve now dropped games to the Nashville Predators, Anaheim Ducks, Columbus Blue Jackets and Devils on Coliseum ice. Whether it has been little mistakes or unforced errors, the Islanders just haven’t played their game while at home.

“I thought we were fine for the first 30 minutes. We had some chances we didn’t capitalize,” Islanders head coach Barry Trotz said. “I think after about halfway through the period we got away from our game. … We have to stay to what we do well. If there is a play to be made make it. If there’s not then lets put it in a place where we can retrieve it or continue to poses it.

“I don’t think we did that right through the whole game.”

"About halfway through the first period we got away from our game. We just haven't found the back of the net." – Barry Trotz pic.twitter.com/j8QCxxdRxB

The Islanders are 9-5-1 at the Coliseum and 13-5-2 overall on home ice this season. Five of the Islanders’ next eight games will be played at home, so the Islanders will need to find ways to pick up a few wins over that stretch.

That’s become abundantly clear to everyone in the team’s dressing room.

“That’s a concern for sure,” Ryan Pulock said about the lack of wins. “We have to do a better job at home. It’s important to take care of business at home and we haven’t done that here lately.”

faceoffs were the difference

The Islanders won 31 of the 58 faceoffs that occurred in Thursday’s game, but it was the ones that they didn’t win that came back to haunt them. Both of New Jersey’s goals came off of defensive zone draws that the Islanders just couldn’t come away with.

Subban’s goal originated off a faceoff win by Travis Zajac. The Devils’ forward was able to beat out Nelson for the puck and move it to Nikita Gusev, who set up Subban at the point for the one-timer.

Check out all the highlights from tonight's victory over the Islanders. #WeAreTheOnes | #NJDevils pic.twitter.com/VvTrrL4Q9j

It was Nelson again who lost a crucial draw in his own zone that led to the Hischier goal. The Swiss forward swept the puck off the boards and picked it up himself on his way to the net.

“Those little plays, those draws, a couple bounces and they score two goals just like that,” Brock Nelson said. “Kind of two, three seconds after the faceoff. Would like to have that back and maybe play them a little differently.”

The Islanders’ forward has been quiet for most of the season. He has dealt with some injury issues, but Jordan Eberle has not found the form the Islanders need him at.

Eberle has just three goals in 29 games this season for the Islanders, and those only came in early December. A pair of goals in Detroit on Dec. 2 ended his goalless drought this season and he added his third of the year on Dec. 14 against Buffalo.

Since then he has added just five points.

Eberle finished Thursday’s game with one shot on net in 17:24 of ice time. He started out the game on a line with Ross Johnston and Josh Bailey before being moved to play alongside Anders Lee and Mathew Barzal.

“We need some production from him,” Trotz said. “We’ve had all kinds of lines this year. He’s been up and down. He came back from an injury, but we’re going to need more from everybody. We have to do it with a whole compliment of forwards.”